Freeze/Lags while touchdown - but fps around 50 while approaching

Can anyone help me, i always get lags when i touchdown… my fps are overall good.
The touchdown appears also in the replay… (i use flight recorder)

I have the same issue. I hope someone can give us an advice.

Same issue for me. I just upgraded from an intel i5 and GTX 1060 super system to a brand new HP Omen with a Ryzen 7 and an RTX 3060ti because I was just tired of trying to deal with an inferior system paired with all the problems introduced by the updates (the intel i5 actually ran the sim on medium settings pretty well until they started rolling out the big updates). So needless to say it was extremely disappointing when I tried my first approach into KLAX. The minute I began the ILS 25L approach it started stuttering. 1 to 3 second stutters all the way until I exited the runway. I was expecting CTD the entire time it was so bad. Next(the following day) I tried an ILS approach into KSFO and the sim just froze the minute I made my turn into final. Eventually had to just force quit.

To have spent thousands of dollars and still not be able to fly the big airports is infuriating! Nothing worse than a perfectly smooth hour+ flight that ends on the final approach! AAGGHh!!! It’s got me all conflicted now cause I’m having to worry about a complete waste of time every time I try for for a legit flight plan to a bigger airport. Sorry for the long winded response!.. I’m frustrated. 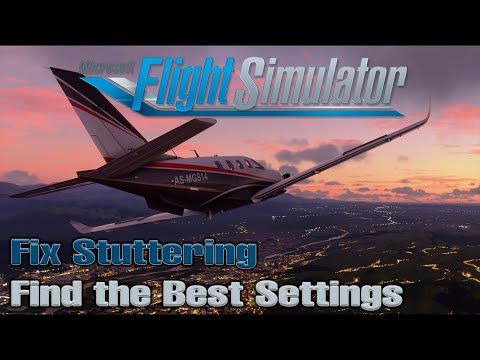 This video really helped! It has some great system configuration tips that made a huge difference for me. I just managed a successful KLAX ILS 25R approach and landing. It did get really stuttery for a few seconds when I deployed my landing gear but quickly smoothed out and I was able to get on the ground without any more trouble.

Like seriously the sim was working well yesterday now today constant pauses and these crazy tips and tricks won’t help when its something possibly on the server side of the sim.
Overall the sim’s performance is unpredictable.

I still have this issueeven after the update 5…

I’ve only had this issue SINCE update 5. It’s a lottery this game.

I cant fix this issue

Im having micro lags/stutters almost every time the aircraft touchdown in the runway. It doesnt matter the airport, it can be a big one like KATL, a veeeeeeery small aerodrome or even landing in the grass in the midle of nowhere… it happens with the simplest/smallest aircraft like the Flight Design CTLS or the latest FBW A320 developer mode one… it doesnt make any difference… The 90% of time I have those micro lags while touching down.

I tried almost everything to fix it, downgrading my graphics, to fly without ATC, to flay without AI traffic but NOTHING helps… I dont think is a performance issue because Im getting more than 30 FPS EVERYWHERE but when the planes touchdown in the runways or in the grass I have the horrible lags and Im getting crazy with it!!!

Please, please, please, help me… I dont think is a sim issue because nobody its talking about it in the MSFS forum but its happening to me all the time.

Please help, how we can fix this?

If turning off PG helps, and it’s internet issues, maybe downloading and caching the PG scenery for area with the “big airport” will help when PG is turned back on.

Turn off live traffic, if enabled, and check that as well.

I wonder if this landing stutter is bound to multiplayer, or the type of aircraft… I have multiplayer off, never fly AP, ILS, or any large aircraft, and I’ve not seen stutters while landing. Since WU-6 HF-1 (yesterday) there is some small stutters while flying, but that may be caused by low end hardware on my side. Maybe this landing stutter is an issue related to aircraft, or… servers used by the aircraft for ILS procedures ?

I never use the multiplayer option and I have the lag when the aircraft touchdown in the runway… every aircraft… light ones and heavy ones, it doesnt make any difference.
Its important to mention That I have the lag just in the first landing, If I take off again and land the plane the touchdown lag dissapear.

I tried almost everything and the lag when touchdown still there. The funny thing is that the sim runs soft like silk all the time but NOT when the wheels touch down in the runway or no matter where.

I dont have idea what more I can do

Can’t find the word “Driver” in this topic

Did you check your GPU driver version ?

but its enough to run the sim very soft in a medium confuguration (I get more than 30 FPS everywhere).

About the GPU drivers I have everythin up to date

I have never tried flying from/to LOWI but I use to fly into german airports such as EDDK, EDLP and there Im having a lag when the wheels touch the runway.

Even I can make a flight with the cessna 172 in the middle of nowhere (no addons & no buildings around) and just land in the grass and I have a lag when the wheels touch the ground.

Its very strange because the lag only happens the first landing. If I take off again and land again there is no lag anymore.

The worst is when the touchdown lag happens after a 2 hrs flight without any problem. As soon as the wheels touch the groung the 1/2 second lag appear and destroys the immersion… FRUSTRATING!!

I did it and it doesnt help

any new ideas to fix this?