Is it just me or a local issue or has the scenery become “bland and lifeless” after the update and hot fix?
I’m on Ultra settings on a Jetline Computer.
Things are working all right but the world has lost the graphic beauty it had before the update.
Dudley Henriques

Apparently ASOBO or Microsoft marketing dept needed to rush the XBOX version before school starts next month. The problem is that XBOX can’t handle the same scenery load that the PC’s can, so instead of preserving the integrity and level of reality they had achieved after 11 months of updates, they decided to dumb it all down so they can capture the young child gamer market. After all we have already given them our money so why would they need to cater to us . All the talk a year and a half ago reassuring us that their intent was to genuinely develop a realistic simulator catering to the serious student of aviation and not the video gamer went out the window when they saw all the $ that the children’s market could provide. Good-bye realism, hello video game with lots of eye-candy. Dumb it down so any 3 year -old can pretend they are a pilot … “:zoom, zoom” on their XBox. And “climk, cliink” goes the Microsoft cash register! We had the makings of a great simulator 3 days ago. We need to all make a lot of noise until ASOBO brings back the functionality and quality that we had before the fiasco they thrust upon us with SU5 and the joke they called a fix!

If this is true it was a terrible marketing decision. I can’t help but believe that Microsoft will not allow their prize flight simulator program to become a failure or even second or third best compared to it’s competition. I would hope that there wasn’t a decision made somewhere in middle management to
“borrow” the resources needed for X Box from what was beginning to look like the best flight simulator ever developed.
Microsoft is a VERY competitive company. They don’t like to lose.
There is no doubt, at least on my end, that there has been something taken from graphics in this last update + the hot fix. The sim looks pale and shallow now where it was vibrant and beautiful before.
I can’t help but believe this will be fixed because if it isn’t fixed the sim on PC’s WILL lose market share and Microsoft will have wasted their effort to capture the sim market.
It will be interesting watching this play out. Personally I’m betting on Microsoft !
DH

After 2 days and 50Gb of updates I finally got to try out the new update. It certainly loads the flights faster but it’s clearly been done at the expense of the scenery and models. My home airport is Edinburgh in Scotland and my friend just got the game for Xbox. We took off and flew towards the city and I actually wondered where the city had gone. Where before it was completely 3D with auto-generated buildings and Edinburgh castle modeled in the centre, it’s now a Bing map crudely pasted on a mesh with the castle floating 40 feet above the hill. What have they done! Destroying the graphics quality to make it run on what is essentially a £400 PC when we’ve been running it happily on our more expensive kit for a year now. It’s big selling point was how amazing it looked, and now it looks like Simcopter 2000. I am gutted. 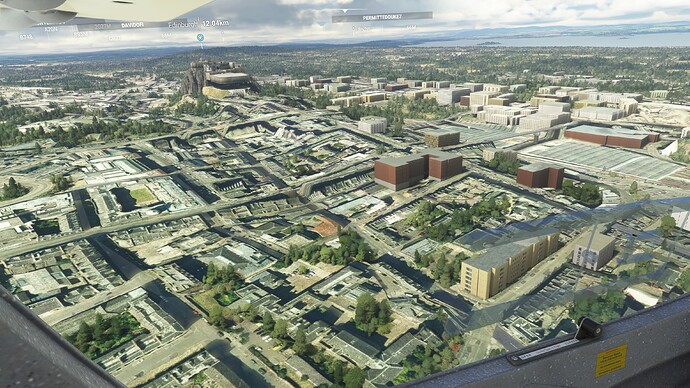 Surely your online functionality had to be off in that photo?
That truly does look like something from 20 years ago. ■■■■■ wept.

Oh well. Never let it be said that FS2020 has lost its power to surprise and amuse. (I’m still laughing)

My friend on his Xbox took a near identical screenshot so it’s not just me. We then went to New York so he could see an actual city with full 3D buildings.

I just tried the hotfix in a high terrain area. The LOD / Perimeter seem to have been reduced considerably (Textures and 3D) and the terrain refreshes much more and closer than before.

I am on Ultra and my PC Specs are:

I feel fooled honestly. I followed the developers streaming channel in youtube. All the times stating they will improve the sim to better, even Jorg stated he wanted the sim to be as the real world with high quality.
The problem about this patch is that they did it on purpose!!! it wasn’t a mistake.
Let the people at least decide which version they want to run instead of compelling us to update and build two separate versions, one for the kids and the other one for real simmers.

SU5 is a truly terrible step for everyone who has been running MSFS on a PC. The game has been dumbed down for the XBOX - and all the features that were so good about it ( realistic scenery, lifelike clouds) have been sacrificed to get performance on the XBOX. I’ve nothing against an XBOX version, but it needs to be different. This is a betrayal of all PC Flight Simmers - ASOBO show that they can build a great product … and then destroy it to chase the XBOX market. Shame on them - I hope that they are really doing some soul searching at the moment

Why do people seem to think that they have downgraded the PC version for Xbox if you don’t have any proof of this why make such accusations. At a guess I would suspect that the PC version and Xbox version are totally different and here we go again above the game has been dumbed down for the Xbox version please show us your proof in a statement from Asobo or Microsoft not with just your own screenshots which means piddly sguat.

. Under the data menu do you have Bing Maps turned on? I noticed after SU5 mine was off. 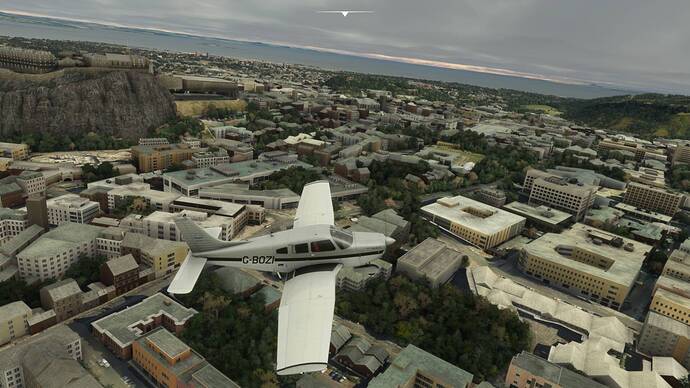 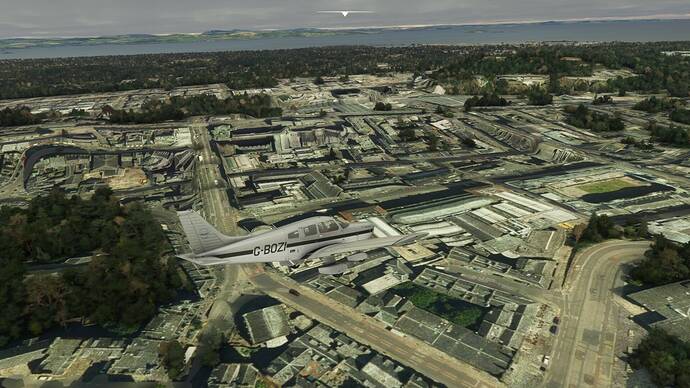 Looks like a database error at the server end. Either way, parts of the castle are floating in the sky…

AI buildings completelly missing is an issue that I also observed in many areas, Zürich Switzerland LSZH area for example.
I captured it on video in my post here: No AI Buildings anymore! :/ 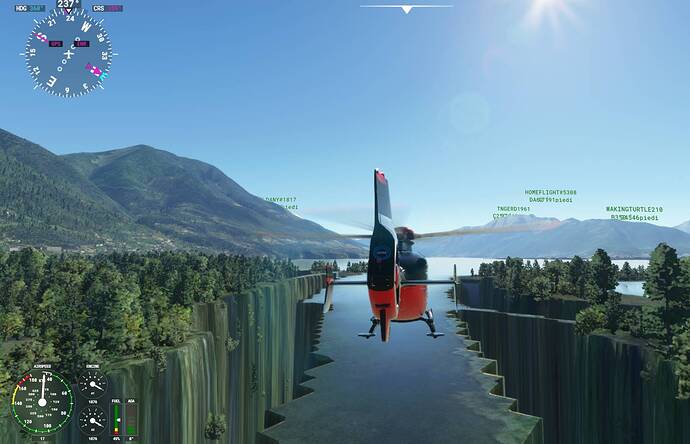 Try deleting your rolling cache, taking off from the closest airport and going straight to the castle. Let’s see if it’s back. I have a working theory that we’re being strangled on bandwidth due to lack of server capacity. After I had been flying a while, I went over Aarhus Cathedral, which looked much like your picture of Edinburgh. It was flat as a pancake. I deleted the previous way points so that I went to Aarhus first, went straight to the cathedral, and there it was. Looked pretty good, too. I went down to the southern edge of the city, turned around and came back, and it had been nuked again. Photogrammetry has nothing to do with this.

I took 3 screenshots of the same scene. 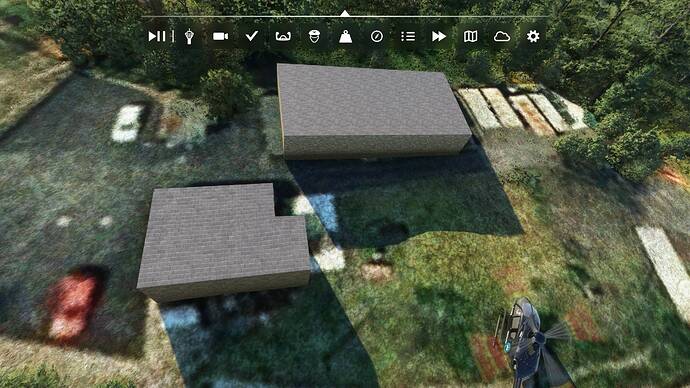 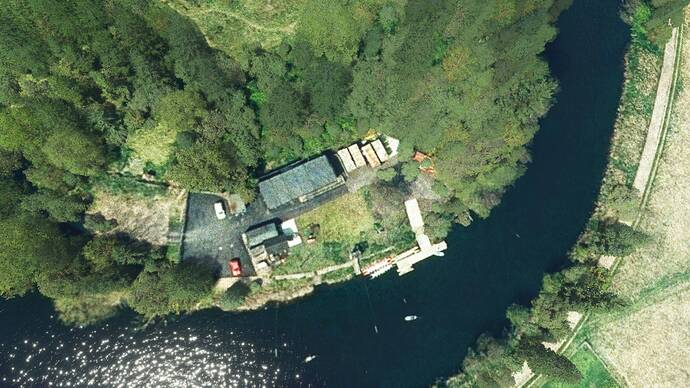 My biggest suspect is bandwidth just now but it really needs sorting out. Places do not look good rendered in this rubbish way.

What I immediately noticed (graphicly) since the update is that the terrain at higher altitudes appears to be blanched and the clouds are now cartoonish. It’s quite disappointing that PC users had to take a graphical hit so they could force this onto consoles. I hope they will work this out in the future.

Do you have any proof that they are forcing you onto consoles or are you just making an assumption? By proof, I mean concrete evidence like a written statement from Asobo or Microsoft.

You might be right although I have exactly the same at 0730UTC this morning. I put this in as a Zendesk bug report … although I suspect they have a lot on their hands right now.