I was just browsing the new marketplace releases and noticed a new plane I hadn’t heard of before. The GKS (Golden Key Studios) Mig-21Bis. They previously released this for P3D and were apparently hoping to have the MSFS 2020 version out the door back in november.

This is the associated website as far as I can tell, though it hasn’t been updated in a while: https://www.aviasimhd.com/

As a huge Mig-21 fan - who’s flown the DCS one extensively - I’m rather tempted to buy it. But at 40 euros, I’m hoping someone else’ll take the plunge first for a change

I’ve been waiting for Soviet aircraft (the Sukhoi by IndiaFoxTecho i would’ve gotten, but they had to make the cockpit in English >.<), so i’m def keen on the Mig. At the price though, it’s one that i for sure am gonna wait to hear some reviews on (not 'cause the price is bad, it’s just a lot for me) 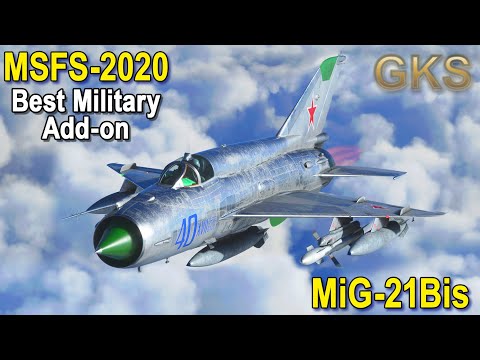 Yeah, saw that one as well. Though it’s not the best of previews. And when they themselves label it as the ‘best military add-on’, weeeelllll…

There’s a few other tutorials and clips from the P3D version, but I can’t quite seem to find any reviews on that.

Usually I’d jump on this as it looks decent enough, but since I already own the DCS Mig (which is regularly on sale for like half of this new GKS) it seems prudent to wait for some reviews at the very least.

Defo Overpriced due to marketplace fees I guess…

Something looks to me,

It is not, PF looks very different

Oh man love the Mig-21 so much. Beautiful plane. Keen to see a review of this but yea too pricey to buy off the bat for me.

Oh wow this is out??? It looked really well done in P3D and had pretty deep systems. Not a fan of the marketplace though.

Hopefully it’s available somewhere other than the Marketplace since it’s large array of weapons will most certainly be absent. Even if they’re static.

Well, I’ve looked on Simmarket as the site implies the P3D could be purchased there… but neither the new MSFS - OR - the P3D version are on there. Their own website hasn’t had a news update since november, their forum doesn’t appear to have new messages, their latest YouTube video is five months old…

If you told me this developer had disappeared off the face of the earth, I’d believe you. And yet, here’s a release. Very strange. Usually devs tend to communicate when they release things.

Hello, the GKS team is here! Feel free to ask any questions

Hey! First off I hope you are all safe in Kyiv! I’m very excited for this release, I just was curious if it will be available outside of the marketplace, as I’d like to be able to mount some weapons on it. I had read on another forum that due to piracy concerns it would only be available on the marketplace, is this true! Either way I’m excited to try it out!

Everyone’s staring at each other, standing around the pool, waiting to see who jumps in first lol

I will def be purchasing it. I wanted it for P3D but I had already abandoned that platform by the time it was released.

Thank you for this info, does the version on the marketplace have the functional drop tanks?

Is there a manual somewhere? I cannot find any pdf in the mod folder?
Kind Regards

As of right now don’t buy it. I’m having a ton of issues with it. For starters you can’t even go max throttle 80% is all you get