Just popping in to see the discussion … Patiently waiting

Would love to glide along the Lake Superior region and the Great Lakes region basically for people with sailboats are in the Great Lakes in the summer till fall, then some go winter on The southern Lakes and spend Spring in Lower Texas for best wind seasons in the USA

Ohh wauw!! I really hope you make this happen.Really miss flying a hangglider in Msfs2020.So yes! hope you can finish this project.Would be so great for flying your baby.
Please keep up this wonderfull work and drop me a message when ready.
greetings
Andre

Hi everyone, my first post here … as finally decided to get into MSFS2020 gliding after many years in FS9 and FSX gliding and gliders flight dynamics modeling and instruments tunning (but no yet with a MSFS2020 rig)

Does anyone know whether Mr Peter Lurkens or Mr Max Roodveldt or Bulau or Mr Wolfgang Piper are active in MSFS2020 gliding development?? …

i,ve seen B21 around which is a great thing to know but to have all the pioneers onboard would be great … from here i encourage all of them to get back into bussiness.

My ASW27 H4 cockpit overflying Segovia Spain (one of the best gliding areas in Spain, have a look into OLC Fuentemilanos airfield)… you all may recognize the hand of all the pioneers in it … as well as my own is in there

Good to say hello to all of you, soon will put money into a new MSFS2020 rig and be able to try all of your great and new developments and hopefully learning how to put also my hand into MSFs2020 internals …

Good to say hello to all of you

Hi Jaguair - you’re certainly quoting right names from the 2004-FSX gliding era - I think it’s fair to say there’s a new crowd involved with gliding dev in MSFS. Wolfgang has permitted a couple of his glider models to be ported over but the ‘FSX ports’ suck for various reasons and we’re doing better with new-built MSFS gliders (incl. Discus 2, DG808S, AS33, Pilatus). There’s a whole new generation of tech involved which has left a fair bit of the FSX dev community behind - Asobo didn’t help with poor documentation for the SDK but that has improved a huge amount since the launch. Modern gliders have much more code in the panel instruments than the FS2004/FSX days, and TBH the MSFS support for that is in a different league than the C++ and XML for FS2004/FSX, but not everyone is familiar with HTML/CSS/JS. The most advanced glider I was involved with in FSX was the ASH25 (working with Wolfgang who did the 3D model) - the AS33 for MSFS is already a generation ahead of that (flight model is better, panel is much better, ballast modelling with the 5 tanks is much better, AS33 has a retractable self-launch motor which was really hard to do in MSFS and I don’t think we could have done that half as well in FSX).

Mostly for MSFS we’re anticipating the ‘Gliding Support’ due for delivery next year (hence this thread), which we are assuming will include thermals linked to the cloud system - when that arrives MSFS will be in pretty good shape for soaring.

If you have the enthusiasm to learn a new stack of tech for MSFS, you should have a lot of fun. Sticking with the FSX tech but trying to apply it to MSFS is a mistake, IMHO, even though MSFS has some support for that.

Hi Ian, than you for your reply and your welcome.

Yes, it is fair to thank and congratulate all the new crowd of people involved in gliding dev in MSFS 2020. I do not know all the names jet, however i´ve already had the opportunity to see the work of some, as Madolo´s and yours new AS33me & and Alex Marko KineticAssistant and DG808S (these were that have fished me back to MSFS gliding and gliders dev/tunning). So thanks, congrats.

It will be great again to learn out of all your new gliders and addons the new technologies involved (HTML/CSS/JS) and to continue enhancing my aerodynamic models using the new MSFS modeling and design tools. Looking forward for it.

Meanwhile, i do not want to loose the opportunity to encourage Alex Marko to enhance the XCSoar link he has included in KineticAssistant to not only send out of MSFS GPS like NMEA sentences ( $GPGGA $GPGLL), but to include other sentence like $POV (from the Openvario project) so intelligent vario data as true airspeed, static/dynamic/total air pressure, extrenal temp, or total energy vario data, or polar and wingload commands, could be sent to XCSoar so all its gliding computer power could be used with MSFS gliders. Hope Alex finds this new feature in his software as useful for the virtual gliding community as it is in real gliding. If you also think this feature will add value as i do, please i would appreciate you also send a encouraging message to Alex.

I remember well your (and Wolfgagng) ASH25, it was a starting point for me to learn to dev/tune my own gliders aerodynamic model and gauges, it was so fun, and by those days my own modeled ASW27 H4 and DG808S H5 were borne.

Meanwhile, i do not want to loose the opportunity to encourage Alex Marko to enhance the XCSoar link he has included in KineticAssistant to not only send out of MSFS GPS like NMEA sentences ( $GPGGA $GPGLL), but to include other sentence like $POV (from the Openvario project) so intelligent vario data as true airspeed, static/dynamic/total air pressure, extrenal temp, or total energy vario data, or polar and wingload commands, could be sent to XCSoar so all its gliding computer power could be used with MSFS gliders.

Thanks for the suggestions. Not much feedback received about NMEA feature so it stuck on very early stage. I will check the possibility before next Kinetic update.

I will use this opportunity as well =) I’m doing some experiments with WASM scripts last several months, currently working on FLARM device - it has very basic functionality yet and just point into nearby aircraft and ground objects direction, but with time planning to improve it into properly working device. It will be available for free usage so glider developers can plan where to fit this tiny thing. 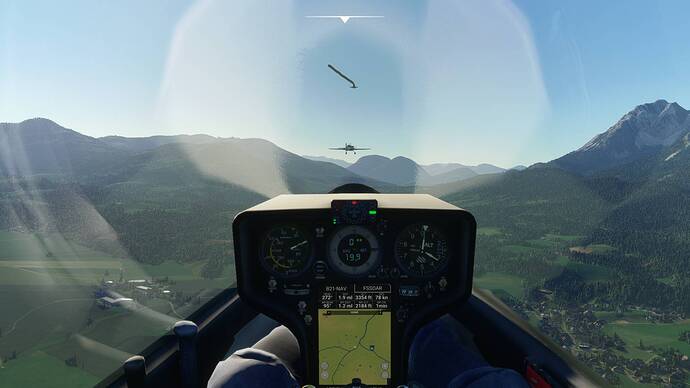 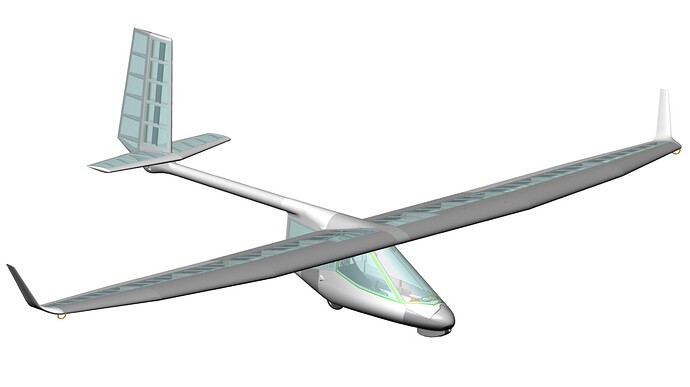 Why this glider and not one of the high performance ones?

Great to know that you will have a look to the $POV sentece specification from the Openvario project to enhance the XCSoar link.

Your FLARM prototype looks great. So far i´ve never seen one simulated anywhere. XCSoar has also support for NMEA style sentences from FLARM devices and can display planes around in its map and issue alerts. To have all integrated as in real gliding sounds like a dream. I would help in such a project anyhow (even it could motivate me to spend the great money needed for a new MSFS rig … jajajajajaja)

What is so special about how it launches?

Ah foot launch … yes indeed that is funny, until you break them

The high performance ones climb pretty well … you would be surprised, even with water on board… of course the wing loading of the one above is close to nothing … one gust and you are gone

In case anyone missed it - I found out that by setting extreme weather conditions - like temp >50DegC, cloud layer from around 1000m to 18000m MSFS2020 indeed have reasonable thermals (average clib rates around 1.5-4m/s) under towering clouds! It is not a random convection - those thermals really are only under the clouds. This is very impressive as for a long time I thought that those clouds are only pretty visuals unrelated to weather - this proves otherwise. I made two races you can use to test it RACE-THERMAL-78-EPPR - Touching Cloud and free flight RACE-THERMAL-104-EPKZ - Touching Cloud - you can use “Race files for manual installation” to download flight plan and weather file or use Albatross software to try it yourself. I made around 10 cross country thermals flights with it, I am long-time RL glider pilot and software dev so I know what I am talking about

I have an acute problem with the DG808. After about 5 to 10 minutes of flight time, the machine tilts over one wing. It no longer reacts to the elevator, but also does not speed up in a dive. It is no longer possible to save the machine on this dive, because it does not react to the elevator. When I switch to the outside view, I see that the elevator reacts. I am clearly above stall speed. But even with a stall, the machine must stabilize again. Something is very wrong with the flight model. I also checked the center of gravity and reset the values to default. No change. I can’t fly the DG808 for 10 minutes without it being stuck in the ground. I have real flying experience in an ASK21 and DG500. Does anyone have an idea? Possibly it is also a SIM problem that lies outside the DG808.

I have experienced this unrecoverable snap stall too but am not a real pilot. Someone else has also reported this in the Touching Cloud Discord channel for this sailplane.

Check out the ALBATROSS & TouchingCloud community on Discord - hang out with 1,036 other members and enjoy free voice and text chat.

Thanks for the hint. I posted my problem also on the discord. Will keep an eye to see if anyone responds.

this topic is not about DG so let’s continue discussion in Discord. thanks.