Having fun with new RTX 3070 Ultra Setting maxed out!

These screenshots don’t do the pics justice.

Just under 30 fps and flyable stutter free. Sacrifice FPS for the visuals!

For those interested I also uploaded a video of a short flight around LA . There are some parts where it stutters (Did not in San Fran) but not much and given the amount of terrain and air traffic to be expected. If I set the render back to 100 percent it will up the fps.
Hopefully it may give those curious about how much of a difference it will make getting this card a peek.

Now try it in an airliner lol

Thank for enjoying your sim !

GA flights are also my single way of using MSFS and with my 1070, I enjoy quality, stutterfree at 25-30 fps with HIGH settings

I’m really hesitating acquiring a 3070 (not to mention availability) because of the “only” 8 Go of vram. Will work for the next months but block me as a roughly 2 years investment.

I also guess that upcoming DX12 support will increase this need on memory size as we saw out-of-memory errors with P3D.

Thank you again for sharing !

@ColomboBrasil20, I know you’re frustrated, but please don’t attempt to derail somebody else’s thread with off-topic comments. It is in the Code of Conduct.

I added a video I uploaded as well on the original post so you can see the RTX 3070 in action.

It’s still in beta phase. They only let us in because people were anxious and to get free beta testers. With such a large group of people using a sim problems are noticed more often. My take on this. No way this sim was slated to release so early. I still enjoy it though.

Looks brilliant, may I ask what resolution your playing in?

150 will upscale the sim to 4k its not actual 4k obviously but its noticeably sharper compared to 100.Don’t see why not might have a performance hit though

Upscaling uhm, it’s not even like you are getting true 4K. I did see a video from Digital Foundry where they looked at setting it at 120 render resolution but found very little benefit beyond that. Their optimised setting actually had the render scaling at 90 as the TAA is pretty good at filling the rest in. I would just keep it at 100 but that’s my preference. Hope that helps.

We know its not actual 4k.100 @1440p still appears blurry.100@1440p is blurry and the render scaling helps a lot if you have the GPU power to spare.What ever he chooses to do is up to him. Not what suits you will suit him. ‘‘Opinions’’

Ok mate take it easy, I was just giving my opinion. Everybodies so on edge LOL!

Just under 30 fps and flyable stutter free. Sacrifice FPS for the visuals!

You got me wondering so I’ve tried as close as possible the same spots, using the settings I’ve documented in the following post and I’m quite pleased with the results: 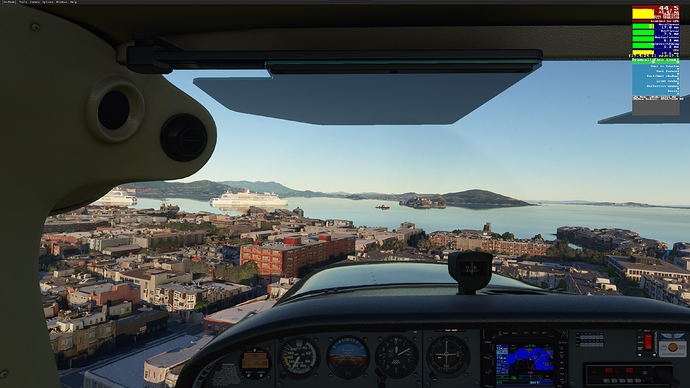 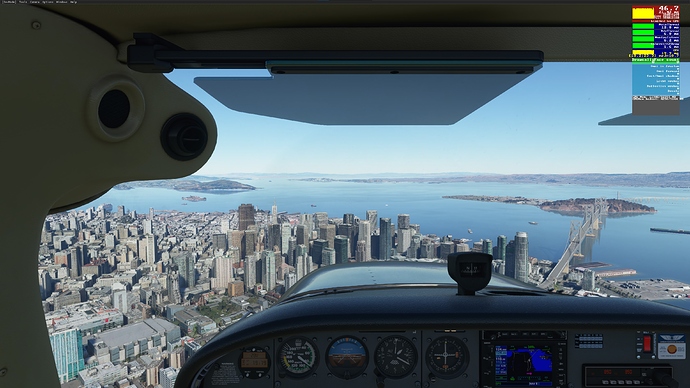 I can also notice in using super sampling 200% you get finer details too, but I’ve also disabled in-game sharpening post-process and I’m not sure the NVidia CPL Sharpen I’m using instead is actually captured in the screenshot.

Your screenshots definitely make wanting one of these new 30xx card.

Yes, I am using 200 percent terrain rendering. If you can afford the fps drop it really does add to the detail. I’m running 1080p btw.

On my screen shot on the dev monitor it shows 5120x2160 effective (?) and on my video same rendering which also has my graphics settings when the video starts.

Around 76 degrees celsius constant. I’m not sure they make a water block for this yet but from specs I think the maximum this card can go is 93. It was toasty but not bad.

Also, I edited my original post to add the flight around San Francisco and a few more in LA for those that wanted to compare my screenshots to an actual flight around SF.