How can we find the stutter reasons

yes unfortunately its in a thread which has 500 odd posts , this is of the same theme
Multiplayer is unplayable at the moment , just hope it gets fixed soon …

I think thats a bit of a red herring , as it would be causing stuttering with multiplayer off as well
plus its a security update , Im not going to uninstall that , besides it was working fine when that came out
WU4 has caused this im sure

multiplayer is for sure a culprit – I think it’s not just one thing, unfortunately.

We also must take into account all of the mods and liveries that we all use – if these don’t get updated after each update, you’ve got incompatibility issues, stutters, FPS loss, etc. I do hope asobo gets it fixed soon.

yes i have heard about the liveries , thing is people have got this issue if everyone else is using the same liveries and another user has a different livery …it causes everyone to have stutters
I dont know the answer but like you and many many others , hope it gets fixed asap

I don’t use multiplayer mode. Never have. Still have horrendous stuttering.

I can confirm after uninstalling the windows update the stutters are gone. But flying the 787 I still experience CTD…so far the other aircraft are good. (although, I haven’t tried the 747-8)

Left is multiplayer, right is offline. Next to the much lower frame rate there indeed seems to be a stutter every second or so.

One other reason for stutters could be that many people are using monitors which are too big and too high resolution for their GPU’s. I have a GTX 1050 Ti 4Gb and I was using a 3840x2160 28" 4K HD monitor until the stutterfest update, now I’m using my old 1920x1080 27" SD monitor at the same FPS but it’s a lot smoother.

I’m on a rtx 3090 with 1440p monitor. In multiplayer mode Gpu usage is really low so sim is limited by cpu. so resolution wouldn’t matter. When flying the 787 for example, the sim is always cpu limited. I get exactly the same performance with 80% resolution scale vs 200 because of that.

Ofcourse having a gtx1050ti in combination with 4k is a bit optimistic. But not the reason for the stutters as in the video above.

I followed you setup, and it worked for me. I only had stutters now and then, but not often. Still, none is better than any.

I am only getting stutters - about one per 3 minutes - in Bush Trips. No stutters when flying otherwise.
I have removed the recent Windows 10 update which has been identified as a possible cause but it made no difference.

This is my present FPS.
BTW all “heavy games” run perfectly! This wasn’t before! 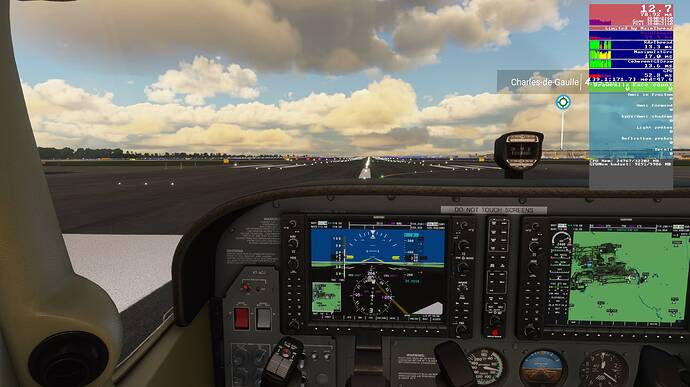 Left is multiplayer, right is offline. Next to the much lower frame rate there indeed seems to be a stutter every second or so.

Excellent comparison, thank you for taking the time to do it!

Yes you’re right, I have a screen 43" 3840x2160 4k and my 1080TI is a bit limited.
I hope that a 3090 can behave better with this screen, when they are available and that this stuttering will be gone.
Even on the video on the right there is stuttering

Please don’t buy a 3090 for this sim. Almost all low fps scenarios are due to the cpu and not the gpu. The gpu will give you better performance in less demanding areas with less demanding aircraft. But as soon as you fly an airliner or around a busy airport you’ll be cpu limited again and your 2500€ gpu is chilling at 40% load. No matter if it’s 1080p or 4k. Better off with a 3080 or even lower for just gaming.

No need for 3090 unless you do rendering (3dsmax, blender, etc). That’s where this monster excels. It’s overkill for pretty much anything game related. I have the rtx3090 and tbh for msfs it does the same thing as my old gtx 1080ti. I even doubt you need a powerful GPU for msfs since it’s mostly cpu bound. My fps are still low.