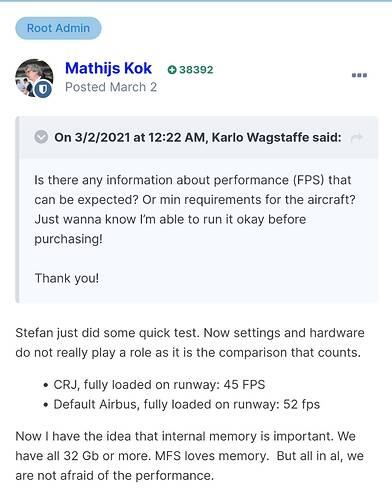 Out of curiosity, do you achieve 45FPS? I get around 27 no matter if inside the Cockpit or on the outside view.

What are your system specs?

Runs very smooth for me. I get 43fps in flight.

I have a very high-end computer, that I bought to run the sim. I believe a lot of problems are caused because the computers are not strong enough.

I find approaches very difficult. I guess I’m low too soon and slow too soon.

Yeah it is worse fps then expected. The CRJ in P3D has the option to switch off the co-pilot instruments. But that is not (yet) available in MSFS.

Why they did remove this option from the EFB is a mystery to me. Especially because the instrument refresh rate function jn MSFS is not working ( confirmed by Aerosoft due to a different programming language / setup )

However … there is a manual workaround that should add 7 to 10 FPS. Did not test myself and will do that early next week. But looks hopeful.

Try this and test on 2 identical situations.

To everyone wanting to improve FPS

Hello Aerosoft CRJ Club! I bought this plane yesterday and had some performance problems. (my pc is not the best) I increased FPS by 10+ by going to the panel.cfg in /MSFS FOLDER/Community/aerosoft-crj\SimObjects\Airplanes\Aerosoft_CRJ_700\panel and...

It’s an amazing plane and I can’t stop myself from doing flights to learn as much as I can in its operations.

Is anyone getting that weird throttle behavior in detents? I noticed that even when I move my throttles to a detent (e.g. CLB), if I move my throttles in small increments, I stay in CLB but the N1 changes. So basically, the detents are a range of N1 based on my physical throttle position instead of being fixed and giving FADEC full control. Is this expected or maybe a throttle calibration issue?

In addition, I found that tuning the radios manually via the FMS is not optimal. First, if a frequency has that .005 in the end (sorry I don’t know the technical term), the FMS will not accept unless you also include the 5 in the end.

Second, the standby frequency logic does not behave correctly (comparing with CJ4 WT and P1D’s YT vids). Correct me if it should really be different, but from what I know, typing a frequency then pressing the LSK for COM1 should make that new frequency active and the old frequency on standby. Pressing LSK for standby should swap the active and standby freqs.

Third, I think the squawk code (ATC1) is not recognized by external programs (e.g. Pilot2atc, vpilot), so if the external app doesn’t have an override for squawk, it might be troublesome.

In short, in terms of radios in the FMS, I find the CJ4 to be much better modeled and functional. I hope this is something that is planned to be refined in the near future, as working with radios efficiently is going to be a huge factor in vatsim.

Update: I tried entering the frequencies and squawk codes via the RTU and there it worked fine. Personally I’d rather use the FMS, though, as typing stuff in is faster than dialing them in, at least for me.

Thank you for that. Will try out tomorrow when I am home.
My setup may not be the best, but it isnt that bad either, so I really expected more FPS. The fact that it is not possible to change the CRJs display refresh rate may add to a even higher Frame loss.
Maybe it is even related to the current Performance issue with SU3, so I hope to see an improvement when the Hotfix drops.

So vissualy it will be a difference for me if i can make it above 30 fps .

Whats a good power setting for cruise that everyone is using? Other than a few growing pains seems like this aircraft is pretty rock solid and I am enjoying it.

While im no expert with airliners as im just getting started with them, but ive been keeping the throttle in “maintain mode” (notch below Climb) and this seems to work well. Its keeping it easily maintained at cruise speed.

Did one flight so far and it looks and performs great. I was concerned about performance since the FBW 320 hits my system pretty hard but this I find is much smoother. So far the only issue I’m having is it seems to have issues tracking the flight path. It takes some pretty steep turns to make small corrections and usually overcompensates, though I could be missing something.

I’ve made a third flight in the CRJ, from KSNA (Orange County, California) up past Reno, Nevada, then jogging back to KSMF (Sacramento, California) for a night landing. Went pretty smooth!

And honestly is it worse than the default MSFS behavior of just straight up messing up and flying backwards?

Definitely finding I’m having less trouble with throttle management as I get the hang of managing speed manually on an airliner; if I actually pay attention it works a lot better than if I let it slow down and stall, or speed up and overspeed.

Sometimes it seems clever to use “speed” (IAS) mode to maintain a fixed speed, but it seems to go worse than using VS mode for me and then dialing in the throttle to match it. shrug Your mileage may vary?

Still haven’t done the full-on start from cold & dark, but tried using the tablet controls to shut everything down and spin it back up so I at least have a feel for what systems are turning on and off and how long they take to “boot up”. (There’s no progress bar on the tablet for state switching, so you have to sit there and make sure everything’s actually done before you continue.)

Flying somewhere over the mountains between CA and NV: 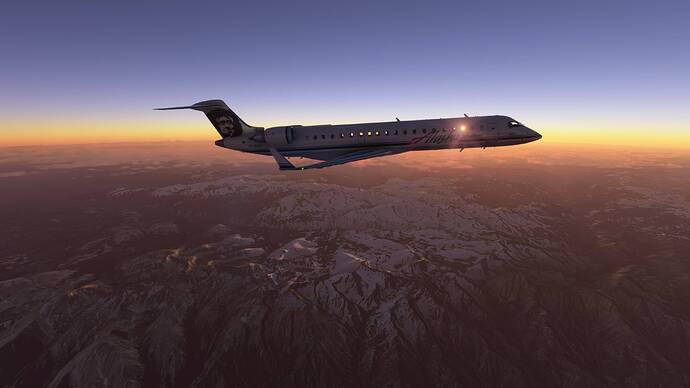 Figured out how to turn on my interior lights and the HUD. Nice. 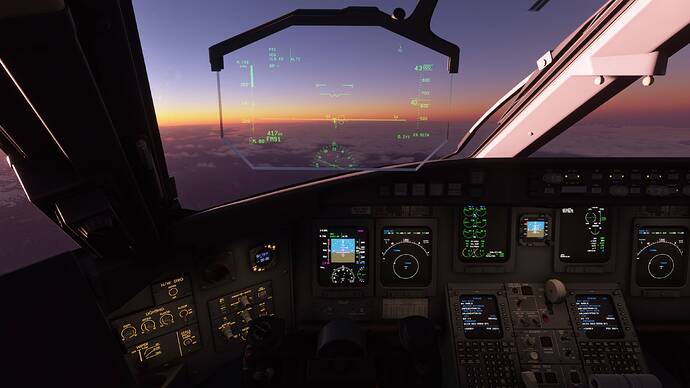 Flying over the desert, little irrigation farms. So cute! 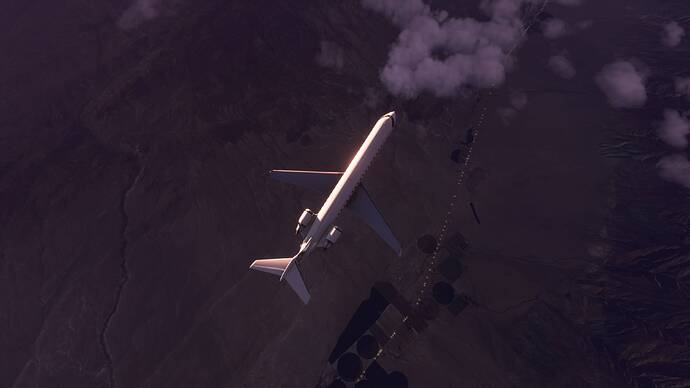 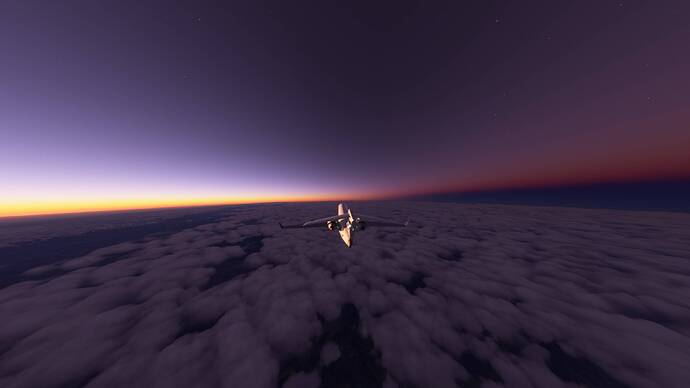 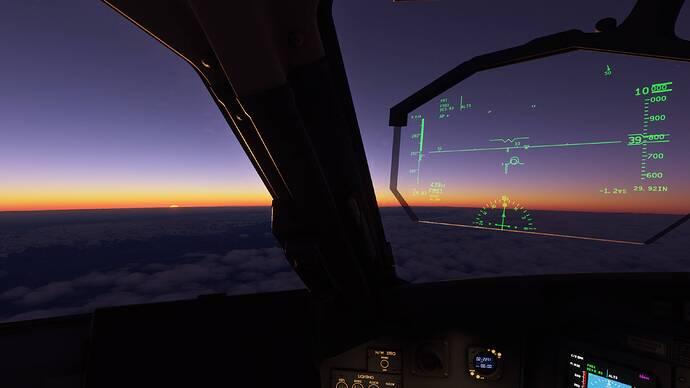 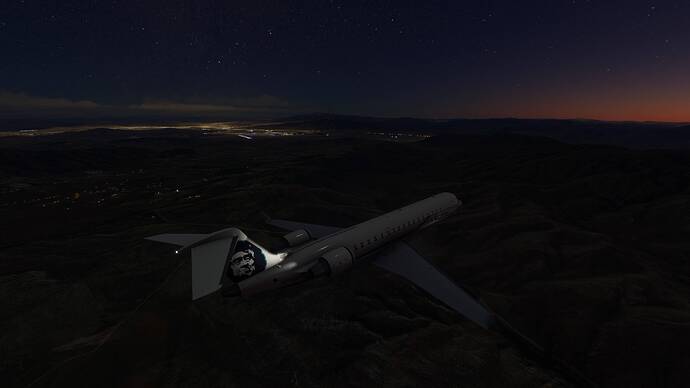 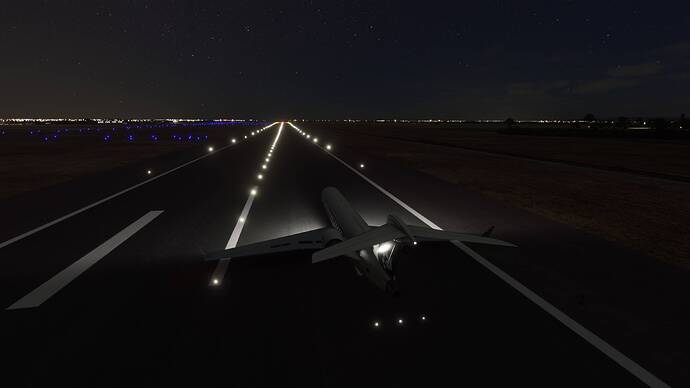 I have problem managing climb to FL400 and the throttle.

I use autopilot, speed knob at 290, throttle at climb detent but my speed keeps decreasing until the aircraft stalls.

Any help is appreciated.

Do you change to mach .74 when passing this (by pressing speed bug)? At FL400 due to the thin air I guess an IAS of 290 is not what you should aim for…

I also advice to watch some tutorial, Filbert Flies has an excellent 1hr tutorial.

It is a very steep learning curve but I’m super impressed with it. You can change how it starts using the iPad but I want to do it all from cold and dark. Had I not flown the Zibo 737 in X plane 11 I’d probably be really struggling but this is a proper enthusiast level aircraft.

The only thing I’m really having an issue with is the plane keeps plunging towards the ground in Approach mode. I can’t work out what I’m doing wrong and have to keep recovering it and then landing manually.

If you are getting the autopilot diving towards the ground after it captures the glide slope, I would encourage a report to ZenDesk using this link. Aircraft that use the MSFS integrated GS hold function are subject to this problem.

The good news is a custom solution for the CRJ is being tested now by Aerosoft. If nothing goes wrong, it will be in the first CRJ update. (edit: unfortunately the tweak in the CRJ update still has problems with the glideslope “Death Dive”. Please keep submitting details to ZenDesk if you experience it)