How to fly without waypoint markers

Try this for learning the basics https://www.fsacademy.co.uk/vfr

In essence you plan your route from one outstanding terrain feature (like a town, lake, river, major crossroads, rail tracks etc.) to another. Keep your legs short (10-30) minutes and cross check your position every few minutes and you’ll be fine. This is the basic flying you learn during a PPL course.
It’s not praying, it’s navigation.
I don’t believe the HDG in the navlog is a good parameter because it doesn’t take into consideration the wind and I have no idea what speed it is based on, which is a critical parameter.

You can try an app called “VfrFlight” for VFR flight planning. You can put in the speed, wind and it will print out a nice navlog to follow.

If you have any VOR’s / NDB’s on your route you can of course use them, either as waypoints or to just cross check your position.

For VFR flights I use a combination of visual navigation (recognizable mountains, rivers, roads, landmarks/buildings, airports, cities, etc) and looking at an external mapping tool like ForeFlight on my iPad, just as I would if I were flying a real plane with no built-in GPS.

(Disclaimer: do not (yet) fly real planes. But researching doing a sport pilot license, and trying to make my simulator experience realistic!)

That’s how you should do it. Theoretically it’s not even legal to follow a GPS in a VFR flight. It may only be used as an aid, not a primary flight instrument.

Honestly, flying up and down the US west coast my primary visual reference is Interstate 5.

Seriously though – roads and rivers are GREAT nav aids when they line up with your route. And roads are lit at night, making them easier to see if you wanna do night flights – whereas rivers are kinda … not lit.

Well… VFR night is kind of an extreme sport. Requires good preparation and planning. In a lot of countries it’s not allowed at all. It’s impossible to do in areas without any light sources, like roads, towns or cities.

Yeah I’d never do it in real life it’s too scary for me.

(And sport pilot license wouldn’t allow me to do it anyway!)

Fun to try in the simulator things you couldn’t do for real though!

Try out the tutorial missions. You actually fly using visual navigation as part of the tutorial series. That will teach you how it works.

There are also VORs and NDBs to help you navigate around.

I follow visual markers, currently the i80, but do occasionally use the built in vfr map (v I think in the keyboard).

I’ll be looking at some of the tutorials posted in this thread to get a better at it. I need to work out a way of understanding how wind is drifting me off course when following a heading with nothing visual to guide me.

I would suggest you check out the training flights in MFS.

Have a blessed day

Can i also import 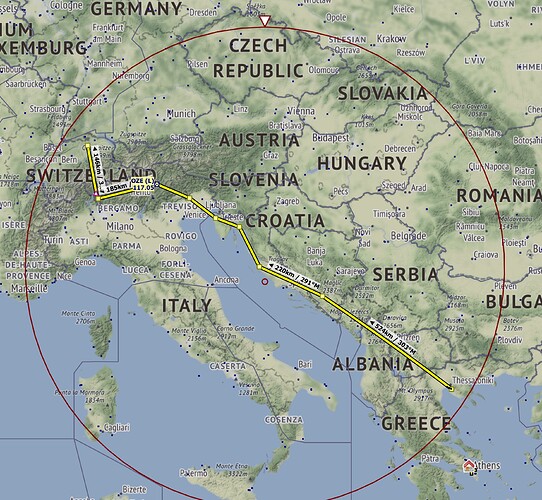 Also worth learning some rules of thumb, such as the 1 in 60 Rule:

If you travel 60 nm, then an error in track of 1nm is approximately a 1 degree error in heading.

60 is a very important number in aviation (it really helps if you are good at multiplying and dividing by 6). Some general knowledge (some of these will seem obvious, but think about them in a wider context):

I export the flightplan to my users directory (C:\Users<your name>\AppData\Roaming\Microsoft Flight Simulator *) with this menu item in LNM: 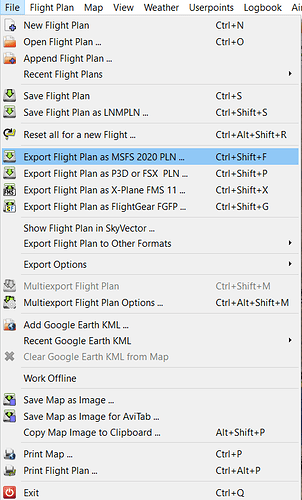 export the flightplan to my users directory (C:\Users\AppData\Roaming\Microsoft Flight Simulator *) with this menu item in LNM:

I do the same. Works like a charm. Then I load that up in MSFS and I’m good to go.

I also do a copy of the raw route in LNM and paste that into Navigraph if I’m doing an IRF flight so I have my charts handy.

It’s exciting to prepare your nav and apply it in flight after.
Preparing the nav is already traveling

Thanks.I will try it

If you have an android phone or tablet, I like to use this EFB. I use it for real flying too. It’s free, but they’d appreciate a small donation to help keep the servers running. They keep the charts up to date.

The other sources I’ve found discussing how connect Avare to MSFS were rather lacking and missed some steps, So I wrote them up here. Follow the instructions on the web to download “xConn v05” and the “FSX Simconnect” programs. (search Google for Connect MSFS 2020 to Avare and you’ll find the links) YOU DO NOT NEED THE AVARE I/O Plugin!!! It’s been built into the software for quite a while now. You can download xconn here You can download older simconnect for xconn here. Install all three …

I wish I could get Avare. It looks like it would be awesome. Unforutnately, it’s blocked by the Google App Store in Canada, as it’s not Transport Canada certified. Even with a VPN, it won’t let me download it. I suppose I could side load it if I find the APK on some sketchy 3rd party store, but I’m always leary about that.

Why does it need to be transport Canada certified? It wouldn’t be legal to fly to use to fly an approach or anything anywhere as it’s not on certified equipment. Seems silly. You might want to check out their forums and see if there are any workarounds.

I looked into it a while back. That’s what was recommended to me - to get the APK from another app store.