How to fly without waypoint markers

Given the bug I reported with the flight planner and non-GPS planes, I can no longer rely on nav markers/routes for flying in consecutive sessions.

My question is – how do people fly without waypoint markers in non-GPS aircraft? Is it basically fly to the HDG in the navlog and pray?

I wonder if the HDG would remain accurate in the navlog given the bug.

I’d appreciate any advice - I am new to aircraft in general so may be missing something obvious. I’d really love to fly my non-GPS planes again. I see a lot of streamers flying without nav aids.Thanks for any tips!

I don’t know if this will answer your question but, I think it’s a good place to start
From the FAA’s web site
“Pilot’s Handbook of Aeronautical Knowledge”
PHAK Chapter 16 (faa.gov)

Holy Toledo. Does this work in real time with the sim? If so, you just saved my ■■■■!

I am doing a world tour with the Cessna 152 relying only on VORs. So it works without GPS and all that stuff

I’m super new to this stuff. How do you do that in a nutshell? I like Little NavMap but the window takes up a huge amount of my screen.

i use a paper map, following coastlines, roads.
using a plan is even simpler, just follow the magenta line, and i never use autopilot…

I can recommend some videos on Youtube if you want to dive into this topic.
For the beginning maybe Little Navmap - Installation, Importing data and Basics - YouTube and followed by VOR tutorial like FS2020 Tutorial - Radio Navigation VOR - YouTube

It pays off to invest some time now in the beginning, it will make flight planning and flying so much more fun.

Most people put LNM on a second screen. There’s quite a good manual. Just read it and follow the instructions. It’s a really great piece of software!

Yeah, trouble is I only have one monitor. But this may be worth it to use a laptop and the networking feature.

Yes sure! Just scroll through the Post your cockpit thread and you’ll see that almost every simmer uses at least two monitors. Could be a tablet, or some dusted off cheap old beast that sits around somewhere on your attic.

I guess you need to understand the basics of navigation first.
If you fly planes that dont have GPS, you have two options:

True VFR: Visual Flight Rules.
That means you will need a map. Either a real one for the area you are flying, Google maps or LittleNavmap.
Then you plan your flight along streets, railways, valleys or other prominent landmarks like coastlines etc.
Thats how its done in the real world. Also you could use dead reckoning, but it will need you to make calculations based on heading, wind, airspeed, etc.

Or you fly VOR to VOR or NDB.
For that also you would need a map where the Navaids like VOR and NDBs are visible with the frequencies for each. LittleNavmap would help a lot ffor this. This way you can use your analog instruments to navigate.

Heres a video that explains how VOR navigation works: 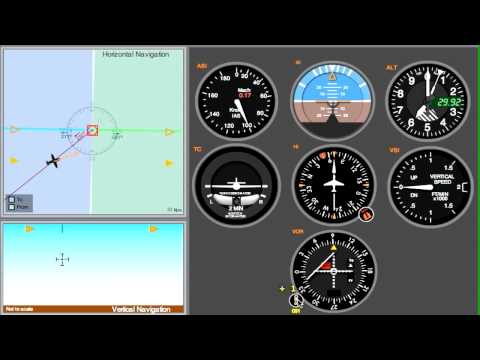 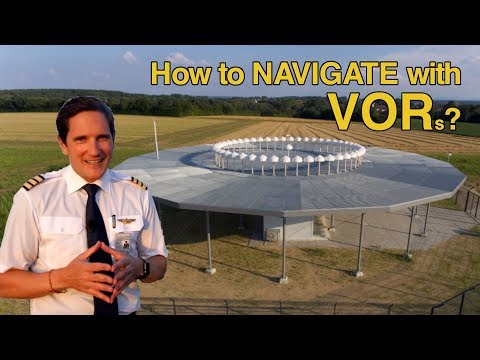 As addition, there is also https://skyvector.com/ . Mainly for US/Canada, europe is not very good covered. But it lets you create a flightplan and export it for the Flightsim.

Here is an example of a real pure VFR flight i have done many times in the real world:

Flying from Hohenems, LOIH to Leutkirch, EDNL. As there is no useful Navaid (VOR/NDB) we just follow the mainroads (Autobahn/Highway) which is very prominently visible, and in this case, it leads us directly to the EDNL airfield. IRL, we have the charts for each airfield of course, that have additional infos like the traffic patterns for each airfield, attached you find the pictures to make it more understandable: 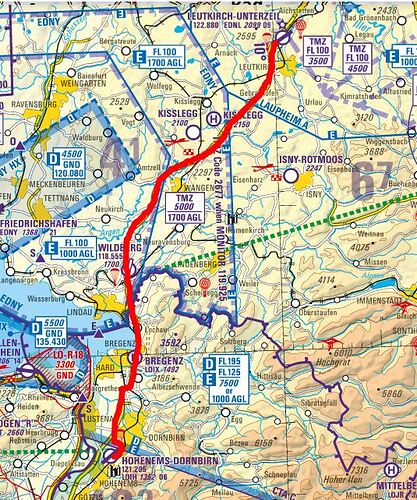 Charts for each airfield (can be displayed in Littlenavmap: 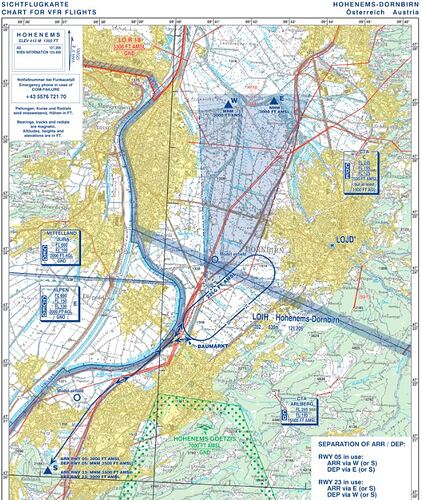 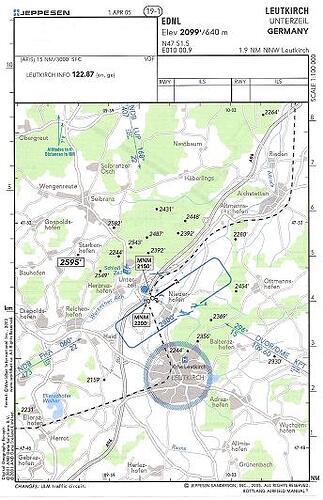 Of course, IRL you have to respect the Airspaces that are enroute. Either you fly above or below them or you have to cconctact the according ATC to ask for a crossing permission. In this case, there is also a TMZ (Transponder Mandatory Zone) which means you have to set the Transponder-Code as seen in the chart and monitor the according Radio Frequency. But this is another topic, best is you start to learn proper navigation and you can learn about Airspaces and how to handle them later. In the sim, all this is not really possible to simulate because the Sim-ATC doesnt act like it would in the real world. But it is possible to ask for a crossing.

I can only stress that LittleNavmap also has the airspaces displayed and it can help you to understand them better.

Thanks for all the useful advice.

I have been experimenting with Little Navmap and I can say for 100% certainty that the networking feature does not work as described. I can get it to connect to my sim, but it’s partially broken. The flight plan simply does not show up if I follow the documentation. It seems like the best course of action is to run Little Navmap on the same PC as the sim. I only have one monitor on that PC, so i’d have to tab out and back in to check my navigation. Guess I am back to the drawing board.

From your description I understand that you expect the MS2020 flight plan to show up in LNM. This is not happening automatically - you would have to actively export it and import it to LNM. Done it and it works. BUT this is not the way to go. If flying VFR (or even IFR) do your whole flight planning in LNM, connect to the Sim and fly, while following your progress and course in LNM. This comes close to IRL, when you would take one of the mobile Garmin moving map devices onto a small GA plane, which does not have a built in GPS. Done that a lot in the past as built in GPS require airworthy certification and have been quite expensive in comparison to the mobile units. Good luck.

i use skyvector as map (for US), Geoportail for France (OACI map), a chronometer, vor/adf/dme, according to the equipment of the aircraft. And as it is VFR flights, don’t forget to look outside for POI like freeways, forests, rivers, towns etc… 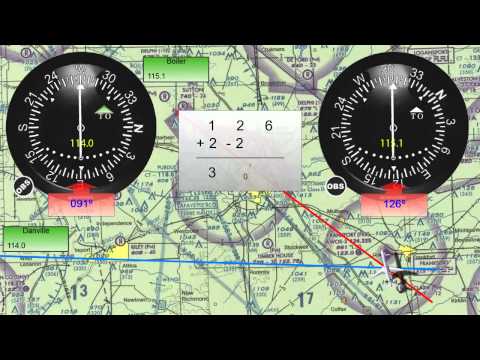 I’m currently en route to Darwin (Australia) from London in ‘full VFR mode’ and am using LittleNavMap, however I’m avoiding using the connectivity to another device/monitor to go full ‘retro’ (I am, after all, following Amy Johnson’s route). I’ve been surprised at how successful I’ve been so far - I’m now over Pakistan and haven’t really got lost, yet. Rivers, lakes and coastlines have been my saviours. I will admit that modern mapping is a godsend.
Like SierraHotel2873, I set up my initial plan in LNM and exported it to MSFS, though I have recalculated my route several times (though I’ve never updated MSFS)

Flying without a GPS is simply a matter of using traditional navigation methods, namely a map and compass. You can work out headings and distances from a map (the built-in flight planner will give you these), and then you fly using either dead reckoning or pilotage, or a combination of both.

With dead reckoning, by knowing your start position, heading, and speed, you can calculate the time it takes to get to your next position. (‘dead’ is a word meaning ‘exact’ - like “dead stop” or “dead ahead”, “dead right”, “dead on” etc.)

With pilotage, you follow markers in the landscape - roads, rivers, towns, pylons, prominent buildings etc. to get to your destination.