I switched from LINK to VD and the results are amazing!

I started with a LINK setup. Although it was graphically appealing the performance at time would suffer randomly. I switch to SteamVR and VD.

My flights are so smooth and graphically nice with very minimal stuttering.
My first VR capture via OBS (stutter is only on the recording).

My settings are as follows: 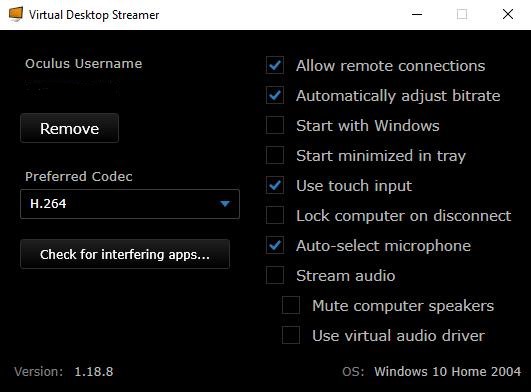 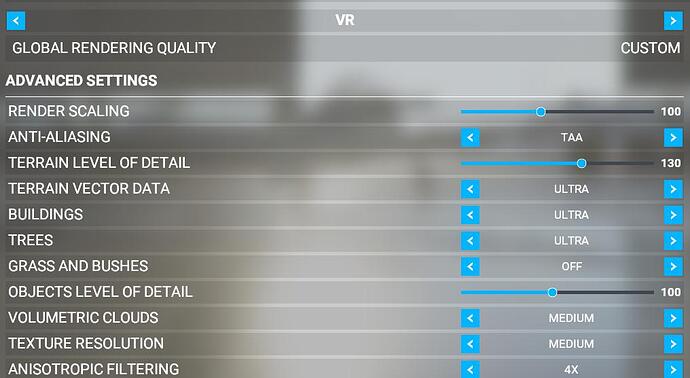 I am experimenting with Virtual Desktop also. What resolution settings per eye do you use in SteamVR?

Here are my settings for SteamVR. Basically Auto but have the per app set as follows: 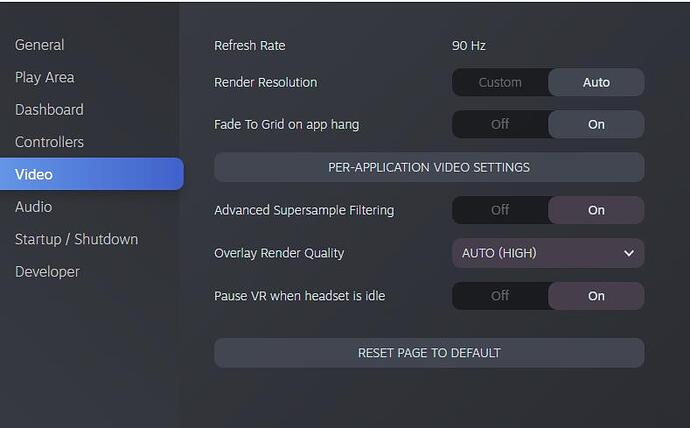 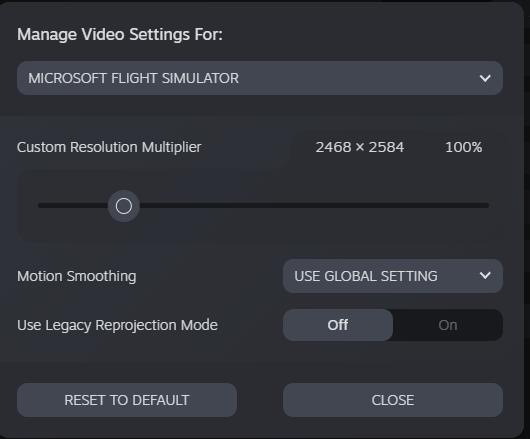 If i start via vd and i get only Black screen, but sound i have IT.

Do you know what is the problem?

You are using SteamVr as your OpenXr conduit I assume as that is needed for VD to work.

How can I opt-in to SteamVR Beta?

How can I opt-in to SteamVR Beta?

Also did you patch VD via sidequest?

My guess is when it switches to a black screen instead of the VD , the OPENXR is not working right.
Perhaps uninstall and reinstall Steam VR and set it for BETA again?

Did you check registry to make sure still set to Steam for the open xr?

Im have good performance. No stutter on the link. But I really wish I could see buttons and text better in the cockpit without having to lean right in.

Does virtual desktop help? Or it it more a performance fix than an increased quality fix? Because we would be trading quality for latency no?

You do get a faster connection to your PC with virtual desktop but the downside is you can’t use the Oculus tray tool to optimise settings in the headset. Also, from what I saw going through the virtual desktop app you have to use SteamVR (if you have the Steam version of the game obviously) and SteamVR just adds another unnecessary layer into the mix, for me anyway.

After weeks of tinkering around the best set up I’ve got is using the link cable, getting rid of SteamVR and using the tray tool to optimise the headset.

I’ve got an RTX 3080 with almost all settings on ultra. The only issue that I’ve got now is the stuttering which hopefully the new Nvidia drivers will sort out.

I would say what is your scaling in MSFS2020. Anything less than 100 makes the cockpit blurry. For me the guages are clear enought but again the compromise is you will never be as clear as 2D as we all are used to. Hence the right mouse click option they incorporated into VR mode.

If you have the right available bandwidth with VD (using wifi 6) you can make the most of the quality of the stream. That would be the right path to making the VD the best quality you can while balancing the lag time from the VD Desktop stream from the PC. I say turn on the performance overlay in VD in the headset app to figure out what adjustments you make are trending the stream better or worse to push the quality/lag as best as you can.

@Mobias7 I agree the LINK is the best method for bandwidth because you are wired but it was opposite for me. Day and Night. The LINK I was constantly trying to fight it as it had it good and bad days. At times the PC would indicate i dropped to a 2.0 connection instead of 3.0 even when wired directly back to the motherboard. The VD worked for me on a consistent basis and while losing the OTT, I guess the alternative is tweaking the settings in the VD app in the Quest 2. Also using the LINK you have to have the LINK app running as well so is that not overhead as well?

Both (LINK app and VD Desktop) software are responsible for streaming to the headset (one is wired and the other wireless).

With either solution you will most likely have 2 pieces of software running with MSFS2020.

One advantage of VD is that you can walk around freely as long as you have enough IRL room…
I am glad it works with your Wifi 6, with my 5ghz wifi, I get 866 Mps, good renders, small latency but my Quest 2 disconnects from router for a few seconds every 10 minutes exactly, no matter what I do. I just hit pause when it happens, it reconnects and I continue my flight. I couldn’t get any help on Oculus forum about that, Wifi 6 routers are a bit expensive for me, I hope a Quest update will solve that wifi problem, I know I am not the only one having Wifi disconnection with 5Ghz routers and Quest 2.

Also, from what I saw going through the virtual desktop app you have to use SteamVR (if you have the Steam version of the game obviously)

not sure of that, when i tried VR, i used Steam VR and my MSFS is not from Steam, its a downloaded from Microsoft Store, but it worked well with steam VR in full wireless mode.
but now i came back to Link, and i remove all Steam and i have quite good performance, but i agree that stability is not perfect, i also experience some crashes of the game after some flying time, randomly…

not sure of that, when i tried VR, i used Steam VR and my MSFS is not from Steam, its a downloaded from Microsoft Store, but it worked well with steam VR in full wireless mode.

I confirm VD and steam VR, work even with MSFS from Ms Store, that’s my case. They just serve a a couple of software used to stream VR to Quest 2.

Appreciate this post because I’d given up on using Link. However, I can’t figure out how to activate both Steam VR and MSFS 2020 in VR mode. If I enter SteamVR, I go to the start room and MSFS isn’t listed as one of my games. If I start with MSFS, when I activate VR it says no headset found.
What am I missing?

I notice playing with VD+SteamVR, the color is wash out and hightlight image quality (say in sun direction, snow ground) got clipped (totally white).

SteamVR just adds another unnecessary layer into the mix

Same for me, I notice some FPS boost without going thru SteamVR.

Did you opt in to the BETA option in STEAMVR? You have to in order for OpenXr to work.

Did you buy the steam version of MSFS2020? If so it should be listed as a game. If not, use the ADD NON STEAM GAME to add it to your Steam LIbrary

Okay first do you have the patched version of Virtual Desktop installed via Sidquest on the Quest 2?
You then have to run the VD streamer program on the PC.

On the headset run the Virtual Desktop program and it needs to connect to your PC first so you can see your PC’s desktop in the headset. Using your left Oculus controller press the oculus button to bring back up the VD menu and go to GAMES. You should see the MSFS2020 as a game to run.
This way it will automatically fire up SteamVr (don’t run SteamVr on your PC seperately) when it launches the sim.

Once MSFS2020 is running on your desktop (I usually let it load all the way to the main menu), use the CRTL+TAB to toggle to VR mode.

If I recall wasn’t there some color improvement option in the VD app in the headset? Under the STREAMING options “Increase color vibrance”

Not sure it will make a difference.

Thank you so much for such a detailed reply. I had not done the SteamVR BETA, think I confused it with other BETAs. All the rest of the things I had done so I could play HLA. Haven’t tested the changes yet but I’m hopeful enought to try again. I’ve been going back and forth between LINK and VD trying to get one that works half way decently.

I thought it would be easy to add non-steam game but it isn’t. Found this: About

At the time of writing the way Microsoft Flight Simulator is installed on your machine when you bought the Microsoft Store version prevents Steam from accessing the FlightSimulator.exe making it impossible to add it as Non-Steam Game, thus the Steam Overlay cannot be enabled. Also taking ownership of the Flight Simulator files does not work.

Therefore I created a workaround that makes it possible to add the Steam Game Overlay to the Microsoft Store version of Microsoft Flight Simulator.

Maybe the solution but I’m reluctant to try as it adds an additional layer of complication with no guarantee it will work in VR. I presume you were able to add your version of MSFS. Was it from the MS store? Was there something special you had to do? Mine was MS store by via GameStop gift card. Don’t know if that messed things up or not. Appreciate any assistance.

i have a microsoft store MSFS and i succeed to use it through Steam VR easily, without USB cable, only Wifi.