I’ve noticed you can deploy the landing gear in water and taxi out on a beach. Is this by design?

I was able to drive around for a bit before having a mystery crash.

"Can the A5 taxi out of the water on a ramp under its own power?

Yes. The A5 has demonstrated its ability to taxi out of the water and up a boat ramp, maintaining good directional control. The maximum recommended gradient for the ramp is 9.6% with the wings in the extended position."

Ohhhh… didn’t know that. Always just “beached” myself. That’ll be one of my next things to try. Thanks!

@ImpulseCello286
I haven’t tried it lately. In the very early versions of the sim, we weren’t able to actually taxi out of the water very well. Will be interesting to see if we can find a spot where we can actually do it now!
Regards

Yeah, it’s super crash sensitive. I was able to do it at the beach on the Florida coast. The sand would have been the real killer but that’s not modeled.

I think crash off would make it more realistic. I would randomly crash into nothing I could see sometimes.

I tried to get out of the lake in my neighborhood and pull up to my house. But the sim had land masses there that don’t exist IRL and it caused a crash.

The solid mass bridges become annoying too once you are a boat.

I think I’d be able to hop in one of these A5s IRL and do some fun stuff.

I also found, if you do a pushback into the water it initiates a collision.

Nice that they’ve finally enabled this on the Icon. You can do this IRL with the plane. Not sure when they added this as I haven’t flown that plane in forever now.

I think it’s been able to do it for some time now. I can say for certain that it’s had the capability for 4-6 months at least. I remember when it couldn’t, and then one day it just could. Good stuff

Glad they did it. It’s been at least a year since I last flew the Icon. Not sure when was the last time I tried to drive it out of water. Just know it didn’t work at the time.

I really need to take that plane out again actually. It’s been far too long.

It’s got amphibious capabilities in deep waters too…

You’ve been able to creep from water to land for truly amphibious operations for a while now… although you sometimes run into weird collision detection issues where the geometry of a shoreline isn’t what it appears to be.

Yeah, I’d make sure to turn collision off for a more realistic experience. I wonder if that would make getting under bridges a possibility?

I did a road landing too and tried driving around but the ground geometry has abrupt transitions. I think they do this so we don’t see how bad things look from the ground, lol. Everything looks like overgrown ruins.

Wing folding and parachute next!

I had some amphibius fun and flew from Key West to Fort Jefferson. I was able to taxi out of the water and explore the island. I wasn’t able to land inside the fort. But there is a bug where the ground level is elevated to the openings up top, which might make it possible. I think the Shock could make it.

I’d like to spend a night here IRL. You can fly in by seaplane and camp overnight. 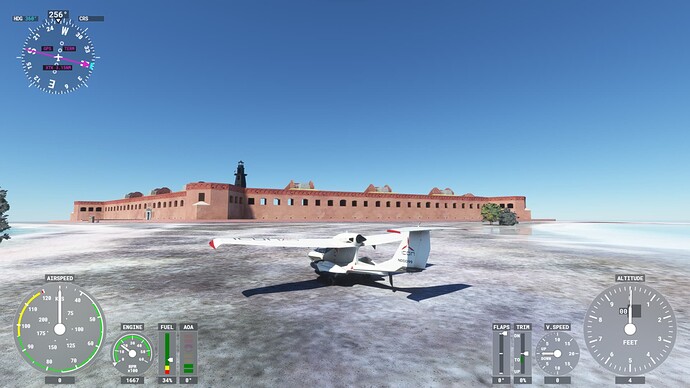 You forgot to rise your water rudder.

I wonder, does it “Flip Over” if accidentally landing on water with the gear expended…
Will have to give that a try…It should flip…

I suspect you’d just get the typical notification that you’ve overstressed the airplane, or something like that! But give it a try and let us know how it goes!!
Regards

I took off at Pensacola International (KPNS) and landed in a close by bayou (Wheels Down) >
The aircraft landed normally and gave no indication that I had made a water landing with my landing gear extended so I took off from the water (Wheels Down) and landed at Pensacola (KPNS) wheels up and just slid to a normal screeching halt straight down the runway…ha
So, I suppose the flight dynamics for a gear extended water landing in that aircraft is simply ignored.
Guess that is why they call MSFS a Flight Simulator Game.

You forgot to rise your water rudder.

I was waiting for someone to point that out, lol.