Hi, I’m trying to follow/understand this training. The training start with ‘it’s shown as a blue needle on the HSI’.
I don’t see a blue needle anywhere.

Can someone please explain me how I can get this blue needle on my display?
I am probably overlooking something very obvious - but I have no idea what :-/

I made this tutorial about a year ago but I think it will answer your questions. NDB Navigation Tutorial - FS2020 - YouTube

There is this tutorial as well with a movable card ADF that is often found in less technologically advanced aircraft. Similar to the top video with the RMI, but slightly different. How To Use an Automatic Direction Finder (ADF) - FS2020 - YouTube

And that is exactly the video I watched after posting my question here, thanks

Aaaannddd we can also conclude that the tutorial in FS2020 is utterly useless.

Well shoot. I just can’t believe Asobo would make something that is bugged.

It’s faint but there. This is screenshot from the NDB tutorial. 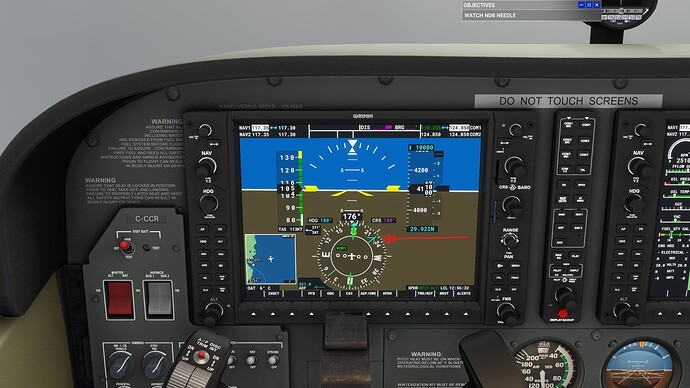 Yes but not without setting the correct more first and the tutorial doesn’t explain which buttons you have to push to get that needle in the display. With the previous VOR tutorial it was the same for me - tutorial didn’t mention to switch it to VOR mode first.
When you know these things it seems obvious, but a tutorial is useless if it doesn’t explain these things :-/

I just flew both to test. There is nothing to set up, touch or change.

You start in the air, everything is set up and all you need to do is listen to the instructor and follow her instructions.

The only things you do need to control or touch are Throttle and Yoke.

Apparently it bugged out on me. I tried the lessons multiple times. In both VOR and IFR lessons I had to manually set up the display correctly (for which I had to watch a youtube tutorial to learn how to do that) before the arrow would show up.

Same bug here. Have to set the mode by myself. Xbox.

I have redone both the NDB and ILS and confirm that the indicators are NOT present after the the first attempt.

Also there is a problem with the ILS mission at touchdown. It detects a crash. It’s been reported.

The reason why you shouldn’t teach basic instrument flying in a glass cockpit. But Asobo also chose to do the basic attitude flying tutorial in a mountainous area with no straight horizon, not surprised.

Stay on topic.
Opinions have nothing whatsoever to do with the topic or the problem.

Calm down captain happy. Of course this has everything to do with the problem, who learns basic instrument flying on a glass panel display with a tiny blue needle? An analog RMI or RBI is what you should use to understand the principles behind basic radio navigation. You can then transfer those skills to glass cockpit HSIs with bearing pointers.

And since this is a forum there is room for opinions. Neither is that up to you to decide, if you have a problem with it you could flag the post for moderation.

A little discovery today. The missing course needle in the VOR lesson and the missing bearing pointer in the NDB lesson are caused by having the G1000 NXi installed. More a problem with the lesson code rather than the NXi in my opinion. Either way it’s simple enough to delete the NXi from your Content Manager if you are planning on flying the lessons and then re-install it for other flying.

Ah! I indeed have the NXi installed, never thought of that being the problem. Thanks for finding out!

Good to know. Thanks for the information.

Interesting. Now I wonder if the crash on landing during the ILS tutorial is related with NXi (not that the NXi is the problem, I have succefully landed on different planes with NXi). Will taste later.

UPDATE: nop. the plane still crashing when landing on this mission.

when I try to check ADF, it says inoperable , but I think i did install the NXi so maybe uninstalling it will fix it

The default G1000 is so bad that I don‘t see the value of learning anything with it. The NXi at least operates correctly. Press the bearing buttons to call the NDB needle and go.

I figured out how to setup everything with the video but what then? I just keep flying at 180 like the voice and objective says and it shows green in the objectives but that’s it. Nothing ever changes and finally I lose the adf signal and I eventually the voice says where are you going and ends the training. I’ve tried just turning on my own after a while and the voice yells at me for going off course and the green goes away in the objectives. I’ve done the training like five times now. I had a g1000 mod installed at one time in the community folder but I haven’t had anything in the community folder since before the game of the year update.

Edit: I did also have the nxi mod installed. Deleted it and everything worked as it should.