After creating a plan using the in built Flight planner I cant get the ILS working on any of the planes ( Cessnal 172, Cessna 208 and others).

What’s the specific issue and which aircraft are you having the issue with?
Regards

Cessnal 172 Skyhawk , Cessna 208 and Daher TBM 930. They follow the flight plan (created with MSFS) but on approach they dont capture the ILS course and also the Approach button does not work

Is this just since yesterday? There was a small “working title” sim patch that mysteriously appeared with no release notes for it. All a mystery. Could it be coincidental?

Let me remove the WT G3000 update (from the community folder) and see.

I re-ran all those planes on an ILS approach/landing that I use for testing on an unmodded sim and didn’t have any issues. BTW, I reran all of them today since there was some kind of update, and still didn’t have any issues getting the Garmin to recognize and capture the localizer/arm the GS and then capture the GS as expected.
If you’re still having issues, we’ll continue to try and work the issue.
Regards
P.S. Just to double check, you didn’t happen to end up in “susp” mode did you??

P.S. Just to double check, you didn’t happen to end up in “susp” mode did you??

Please explain. What is susp? Also Can you create a flight with MSFS and the plane follows the route and also captures the ILS ?

Im getting similar type of behaviour, end up flying around in circles trying to get the thing to capture the ils.

The type of approach you make is never part of the flight plan and there’s not even coding to make it happen in the real-life IFR system, so it won’t be emulated here. There are a lot of reasons for that, but short answer no.

“SUSP” is suspended mode on the GPS, in which it halts sequencing to the next leg until you press the soft key underneath, after which it will resume sequencing. You really don’t run into SUSP unless you are encountering a hold, a procedure turn, or when you fly past the missed approach point (where it does it automatically - unsuspend to fly the missed).

I’d also check to see whether your CDI mode is set to VLOC (“green needles”) or if it’s GPS (“magenta needles”). ILS, LOC, and LDA approaches must use the VLOC mode for final course navigation.

Failing that, I don’t know what else it would be as I’m not having the issue. Unsolicited advice: treat it like an autopilot failure (happens all the time in real life) and learn to hand-fly the approach!

Thanks you for your explanasions. What puzzzles me is that befor the SU11 when I was creating a flight plan with an ILS approch everything worked OK using the Auto Pilot and with the GPS on ((magenta needle).

Hi, I just want to confirm you that the sim is working fine on my side with default C172 G1000.Yesterday I made 2 IFR (low altitudes) flights, planned ,as you do, on world-map, and they ended without ILS problems. No doubts you know how to manage the CDI mode as far as you did it previously. So,I would focus on interfering mods on Community folder (if any,remove them and test) or maybe you use a different Garmin?

I always used to leave the CDI mode showing the majenta line and the C172 G1000 used to capture the ILS automatically. Has anything changed? Also the flight plan that I created with MSFS is not showing, before it used to. 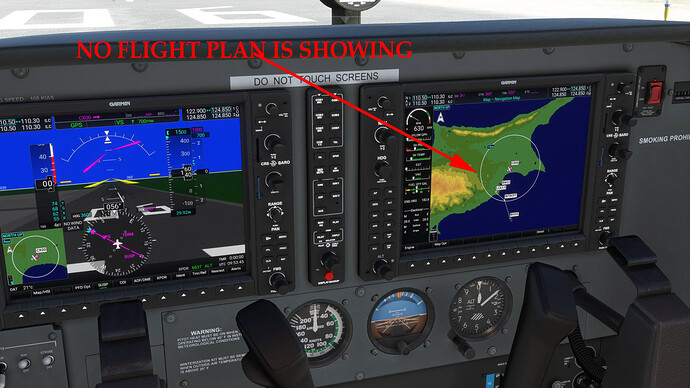 To activate the ILS capture you must once click on CDI and it will show LOC1 in green.On the top left yuo’ll see the ILS freq you have set (it’s set by deafault if you make a flight plan from world map) in Green.
I mostly fly on Asobo A320 and time to time I fly VFR, without any flight plan, joust for sight-seeing but ,at this time, doing an IFR flight ,I noticed something different from the past but not sure what.

BTW,when you activate LOC1 make sure that your route is already straight to the RW otherwise ,if you are still turning,while in GPS mode, to enter the final you may loose the route . This happened to me twice.

Thanks I will try that. Also why the flight plan is not showing on the screen?

It MUST show up if you do it correctly on world-map by selecting your : Departure - arrival - approach (ils ones)

OK I have loaded another flight plan and now it shows on the display but how come in the World map the ILS approch is shown and not in the aircraft display? 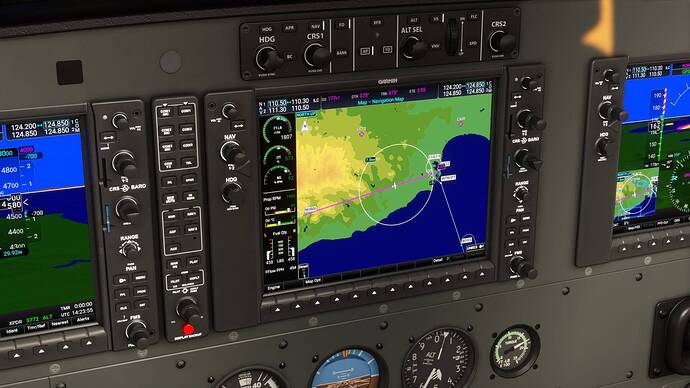 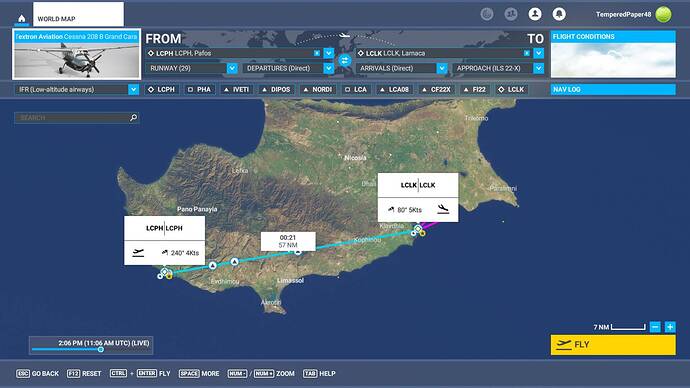 On world-map you should imput a “departure” and an “Arrival” from the blue dropdown arrows.(don’t leave them “direct”) You choose the combination that gives you the best flight plan.

I do that as I choose a depatutre airport LCPH and an arrival airport LCLK with an an ILS approach as you can see the magenta line on the World map. and yet the ILS is not showing in the aircraft display.

On your pic of the worldmap I can see that departure and arrivals are set to : direct. Try to assign a SID and a STAR as shown on my pic.Furthermore, it could help if you post a pic of the VFR map too.Furthermore,the garmin map (right panel) is not that clear .It should be magnified a bit more.

EDIT : I have flown your original flight plan without sid and star. I have landed with ils approach.No problems apart that ,when you are on final approach you must be at 800 ft ,no more, to be able to intercept the ils signal.

If you still don’t see the ils approach on your display,well,this is a non repeatable case .
You should have noticed that the ILS appr. track is very tiny on your display pic.Try to magnify it and see if it’s there!!
You can always try the flight with your settings and, eventually , hand flight to the runway using the LOC1 if you want ILS assistance. 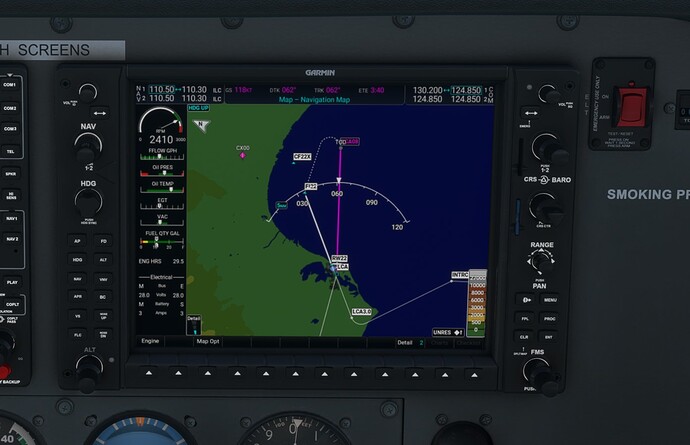 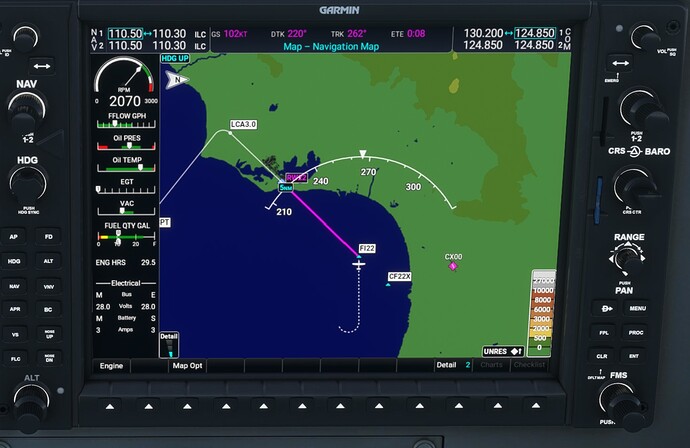