Improve AI Traffic at Airports and in The Air

it also could be a collision issue where ground services get glued together like fuel truck+baggage cart & therefor neither being able to operate? The gate connection didn’t respond either ,the staircase was spawned,but obviously there was a gate here.
I guess AI plane traffic on airports is in the scenery category? A week ago or so, ground service warned during taxiing “caution for vehicle” or something along the lines.It doesnt do it for other planes
on the taxiway. Could also be code issue I guess,or a combination of collison & code …that is ,if these planes aren’t supposed to be scenery…
Sometimes when requesting pushback,the pushback truck turn around in all kind of weird angles on the front wheel of the plane too.

That seems to be a pathfinding issue tied to the specific scenery &/or to the aircraft being used.

Maybe thats just it ,a pathfinding issue.
I also usually save a game before landing attempts & this flight they suggested I climbed to 12000ft again after loading that save where I was in landing phase & no such thing was suggested prior to reloading.
It was like the game was backtracking all the previous flightpoints 1 by 1 after I reloaded that save.So the pathfinding issues might be on multiple levels too.

In the air, I also often have an issue when I lower the flaps in landing phase…it often launches me in the air,even if my throttle is low.I suddenly go from like 3000feet to 15000+ ft in several seconds
where my altitude bar is stuck at the top of increasing altitude. Maybe its cause I have winds enabled? Disabled auto pilot assistance while landing just to be sure…Still happens.Or is it because I increase the flaps too soon ? I’m not sure if this is supposed to be this way.If its an error on my part or a bug.(usually when flying an airbus)

Also the finished screen no longer seems to pop for me after installing my plane at the gate. Usually I put it on auto pilot to check if the plane needs to be moved forward a bit to pop it.That has worked once or twice in the past…but now the green square just vanishes & nothing pops up.I’m not sure if that is needed to save progress? I went to check my achievements & it says I’ve only landed at 6 airports so far.While i’m sure its about 40 or so by now(play it through steam)

I used to wait as a plane crosses the road while taxiing but guess i’m too kind.Sometimes the plane just stops responding & after several minutes its still there.Then after few minutes I discover I can ride right through it 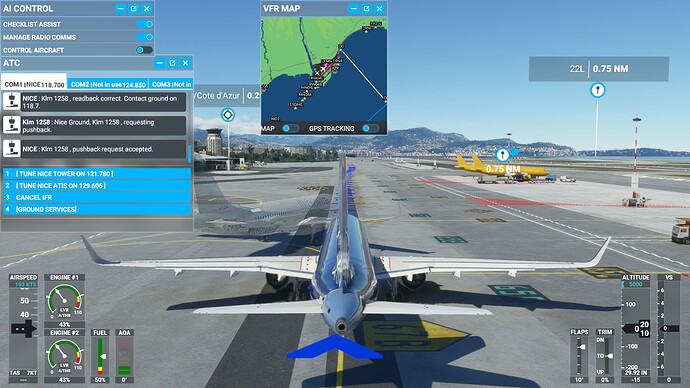 The pushback often seems to bug out a bit too 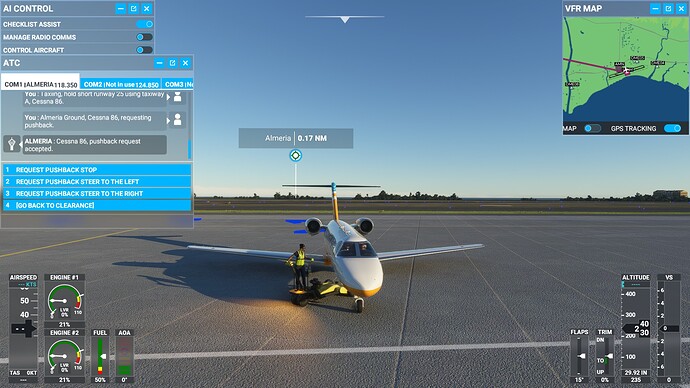 I think there also is an issue with AI planes freezing on the runway & blocking it. Took off in Lisabon & had to wait like 10 mins before the runway was cleared.I decided to keep an eye on the runway & the plane was just standing there & then poof it vanished & I was cleared to take off;But after my departure another AI plane had same issue on the runway I think as the message to clear runway kept spamming 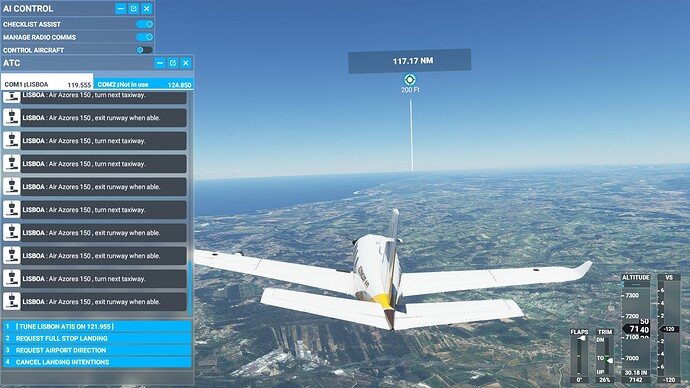 Lovely AI traffic there @Wilster2070 . In current version of FS the AI traffic often seems to freeze on the runway & once I’ve seen a plane freeze while taxiing. Shared the image here too,where the airbus with blue skin is taxiing through a transparent plane

Maybe some AI gets caught up in a loop of sorts? Just had another issue requesting taxxing IFR; 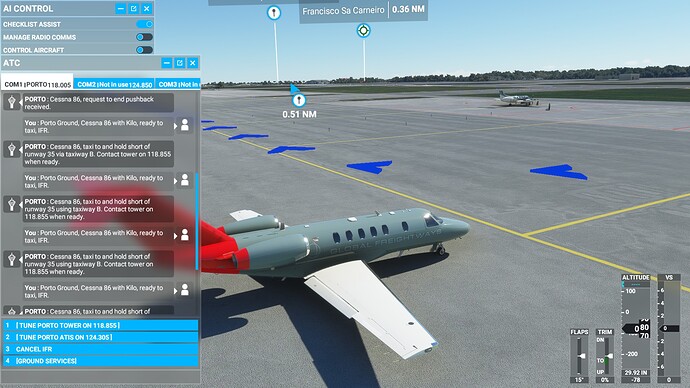 20210713181514_11920×1080 550 KB
it also got caught up in a loop & kept repeating & pilot kept answering.In the screenshot it says “ground service” but I had the impression I was in wrong menu/stuck in ground service menu,cause had to click clearance tab & ask once more,before it finally worked.Another pathfinding issue of sorts perhaps as suggested earlier.

Aslo after arrival I had issue with the game not recognizing that I had landed, 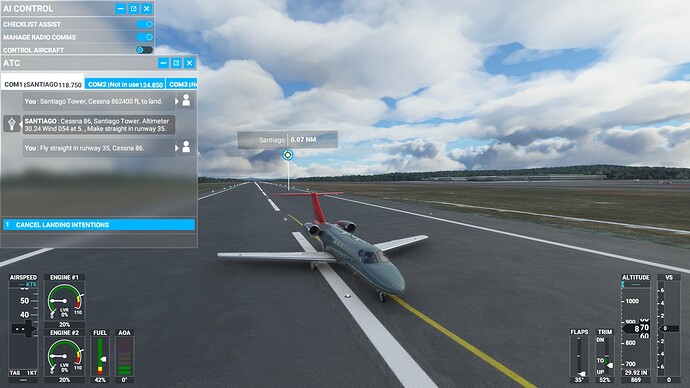 20210713202820_11920×1080 428 KB
And clearly it was an airport with parkings & gates.
even after coming to a complete stop ,it didn’t proceed
to ask me to clear the runway ,just “cancel landing intention”.Maybe my save is corrupt or so? I did reload several times after failed landing attempts with Cessna, very hard to land with this plane & easy to overstress.
.After the game didn’t switch to recognizing me as landed ,I reloaded the game again & let the AI control aircraft,but still same result;
only “Cancel landing intention” & it didnt skip the entry pattern or anything.
I also tried to cancel landing intention even though i’ve landed ,but then I got very basic options,
only pushback.I was unable to finalize my flight before returning to main menu.It was nice flight though.

Also had to request landing when I was very near to the airport,at 7000 ft…While it usually instructs to descend when approaching destination.So there might be path issues from A to Z.

Detach ground services from ATC system
Mid-air and on ground collisions with other aircraft
AlexJTot July 14, 2021, 11:36am #72

Just wanted to add my support for this thread.

Obviously, we have been in a pandemic since the sim released, so I’m sure that is responsible for a lot of the lack of traffic.

Nevertheless, it is clear that many real-world flights are missing. In addition airports that should have, at minimum, a handful of aircraft on the ground are deserted, while other aircraft trying to land simply circle around forever for no apparent reason.

The other day, I was at Amsterdam-Schiphol and four KLM aircraft all flew over the top of the airport at the same time, all with different callsigns, as if flying in formation.

The delay on real-time aircraft frustrates me - I’ve passed an AI aircraft carrying out a real-world flight at 38,000 feet, looked up its callsign on FlightRadar24 and found it’s actually just landed in real-life. I understand a very small delay to allow for processing time, but often “real time” actually means 20 minutes behind in practice. I don’t understand why the delay needs to be this long, or indeed the cause of it.

I agree wholeheartedly with the solutions proposed on the original post of this thread and hope Asobo will continue to work to improve AI traffic.

Two things I would ask @Abriael to add to the list:

I was able to make ai aircraft faster after touchdown. I just disabled reverse thrust´s and they wont brake so effectly now. But, can i somehow increase power of idle thrust? Sim shows thats ai aircrafts uses only 0,1% thrust when idling (taxiing with 10-20kts). I want to ai aircrafts to exit litle bit faster so 20-30 kts all the way taxiing would be a killer solution. Now it is close of 6-10kts when exiting.

When you install an airport addon or add a new airport, you have to dump airport list.

Hello, I guess it’s time for me to write a more in depth wish on this topic

I, just like many others, really enjoy the live traffic option but there can be much improved over the next 9 years Asobo wants to support MSFS

As of now ai traffic seems to be completely broken as planes on ground don’t seem to get ground service or they don’t properly spawn. The aircraft won’t get pushed back and start their engines.

Anyway there are more things which are really strange:

Anyway, as that is a Wishlist topic I got some ideas

These are just some of my wishes for now.

Nah, you are not alone on that one - Sometimes I simply love watching other traffic as it’s kinda stupid but relaxing

Let’s hope ai get some spotlight in the coming years

Please make use of all parking types on vanilla airports! Travis AFB and other military fields got civilian ramps in this simulator but there would be MIL_COMBAT and MIL_CARGO available. This would prevent airliners and tons of GA to spawn on these airports,

I too am frustrated at seeing all the civilian aircraft, at KNBC (Beaufort, SC). I found a F22 aircraft, and when I slew over KNBC, there are several F22’s, but there are a ton of GA aircraft cluttering up the airport. I’d love to have a way to prevent the GA planes from appearing.

You can actually do so on your own - there is an aircraft.cfg (to be opened with text editor/Wordpad) located in each aircraft which hast one line at each livery definition ([FLTSIM.X]) that enables use in ai traffic:

If you just want to reduce the amount of aircraft you might look into correct model matching. In the [GENERAL] section of the aircrafts you will find some icao information you could change from “GENERIC” to some real life types. That model matching will work with Life Traffic then if you set ‘icao_generic = 1’ to ‘icao_generic = 0’

If an aircraft is set to ‘icao_generic =1’ this aircraft will be set to every other aircraft which has no model matching but other matches (engine type, engine count and wake turbolance class (WTC). That’s what asobo does on their traffic to match real aircraft

I think its a real shame Asobo haven’t addressed any of these points in a year since release. It seems that like the weather engine they don’t want people customising or producing improved AI. So we are stuck with this broken traffic engine.

Just announced that Aersoft cancelled a project due to SU5, reason being: “The latest Sim Update has “wrecked” the project as it has changed how AI traffic was injected into the simulator. Not only that but the files that Simple Traffic relied on have now become encrypted, meaning that the files are locked for editing or changes by third-party developers” More info here in the article:

Sad that they haven’t said much about this in the last Q&A, simply saying they are working on it and with AIG.

This thread was opened up a year ago and still MicroAsbo have done nothing in this regard. Not even a move in the right direction. I believe Aerosoft was going to take on AI traffic generation until they saw what Sim or World 5 update did to this simulator. Apparently they were so horrified that they dropped the project.

You would think companies would fall over hills to join this juggernaut but quite the opposite. Man there is something really decaying in the current management is all I can see.

I just pray and I hate wasting prayers on this company but that someone their has innovation and takes the helm from the currents.

Is AI traffic still the same after all these months?

This is really sad.

As Asobo said in yesterdays Q&A there is no actual plan on improving the classic (offline) ai traffic right now but on improving live traffic when it comes to models, amount and liveries.

They already have a bunch of meshes (3D aircraft models) and liveries prepared but still are collecting licenses from manufacturers and airlines because Microsoft has to have these.

Another issue currently is balancing when it comes to framerates at large airports and data provided by FlightAware as many flights are missing which is being investigated.

Jörg Neumann also kinda said that the traffic topic was a bit on the backburner now due to other stuff but they hope to catch up as soon as SU7, Reno and GOTY Edition are released if I recall correctly from what I remember

fixes to the AI logic of the online AI should have direct impact on the offline AI as well, since both use the same “baseline” within the Sim (at least from what I know).