Just managed to stumble upon this when checking the Aircraft section - have been looking forward to this launch ever since it was announced!!

simMarket: INDIAFOXTECHO - T-45C GOSHAWK - MSFS
Indiafoxtecho | Facebook
Will update when I fly around in this a bit more.

Really excited for it, I really liked the MB339, jet trainers in general are really fun to fly.

Hoping it comes to the in game market place soon (waiting for the P.149D too).

That was a quick decision. Just today they posted mentioning they weren’t sure it was safe to release it before the patch or after a week. Looks like they went with it.

If it’s anything like the 339, this one will be a pleasure to fly.

Incidentally, they just made it available on Orbx as well, for those who don’t love simmarket.

Maybe they got the changelog from Asobo.

out of interest, why wait for the ingame marketplace?

Orbx Direct is cheaper, gets updates quicker and even installs it for you.

aside from the exclusive stuff like carenado, I wouldnt dream of using the marketplace.

This looks so good. 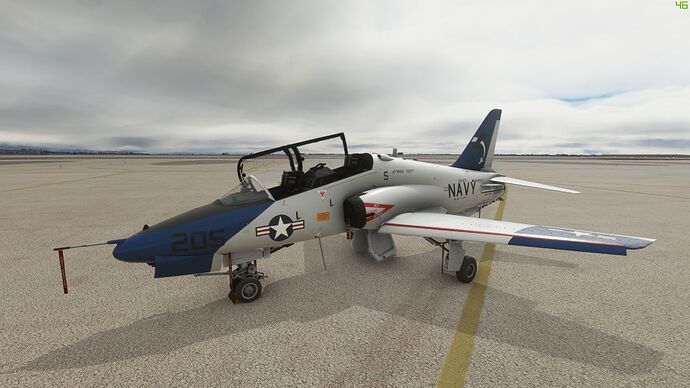 How bad is it in cockpit and what are you running for hardware. Just trying to figure out what my performance index would be.

It’s something of a slideshow for me. It is a lovely looking thing. The camera positions are not great though.

Oof. Ok, thanks. Presumably you are running High/Ultra?

Yes, most on Ultra on 1080p resolution

It really needs a moving, high definition high fidelity, fully functioning CARRIER…
The first developer who manages that for MSFS would make a few friends in a hurry

It’s an awesome, awesome aircraft, but the manual is somewhat lacking. I like real life manuals like the next guy, but they should be accompanied by sim-dedicated manuals that present the information in a way that isn’t sunk by a million of data points many of which you don’t know if they really apply to the sim. For instance, you’re instructed to press the paddle Switch… which isn’t there.

Also, I’ve seen some rather sharp frame drops, at seemingly random times, but I can’t say if it’s the aircraft or something else.

It’s going to have an interesting learning curve, for sure.

What I don’t understand is that there is freeware out there like the F-22 that is in development that has working HTML gauges, it’s not impossible/that difficult to code them in HTML.

I think there is one already… With tailhook support and all.

Re carriers you can’t give a moving model a solid surface. It’s pretty niche but maybe they’ll address that.

I can’t see them ever bothering to make a moving item an offical runway the sim can work with though. Or maybe that’ll happen a long way down the line. Perhaps someone will solve it independently.

The folks that made the AI ship traffic mod mentioned solid tops will come in an update. Not sure if that’s based on actually knowing how to do it, or simply hope lol.