Is HDR even worth it?

Anybody rocking HDR in the sim and can see any major improvements?

For me, I find HDR a bit useless. It makes inside of cockpit even more darker than what it is and really don’t see much of a huge difference in contrast compared to standard.

Anyways, just curious how many of y’all prefer it or not.

I think its okay, you just have get reshade or run nvidia experience and use the shaders in that, to refine the picture. If you on Win 11 dont forget to get the win hd calibration tool, that will help alot with the picture as well.

I like HDR because there’s more contrast between light-colored things like white parts of airplanes and super-bright things like sun reflections, but my current monitor’s fairly mediocre (400 nits, boooooo) so I’m not getting as full of an experience as on a brighter set.

Personally I don’t find cockpits too dark, but I know some people have been having that experience with SU11 beta.

If you on Win 11 dont forget to get the win hd calibration tool, that will help alot with the picture as well.

I have found that the Windows HDR calibration tool has zero effect on MSFS display.

I have better, more vivid colors, graphics with Win 11 HDR = Off.
My screens displays at 1500 nits.

Note: Display has capability of 1499 nits.

HDR gives you a lot more colours and is much more vivid. As the main use for my rig is msfs, I set my colours, brightness and contrast, etc. in the Nvidia software. Overall, I do find the sky and clouds can be a bit too bright and the terrain a bit too dark a lot of the tme though.

Can’t do screenshots with HDR, so I switched it off again… the colours do look a little better with it. Mostly the gradient between sharp dark and bright colours is better, but in the other hand it’s not that exciting

For users of the Nvidia screenshot tool, I have written an HDR to SDR converter tool which you can run to automatically flatten them with some set of default options, or do one-off conversions with custom options (eg, you can adjust the exposure). Currently it runs on the command line, no comfortable graphic user interface sorry 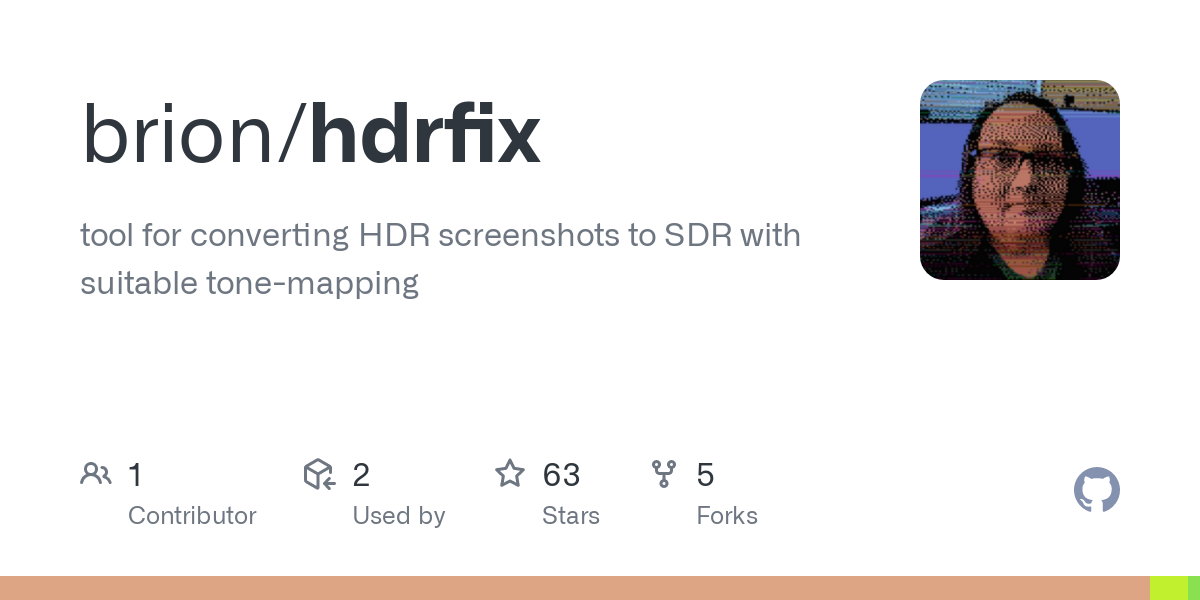 GitHub - brion/hdrfix: tool for converting HDR screenshots to SDR with...

I think the HDR is great. It brings back the dynamic reflections on the clouds that used to be there before SU5 I think it was when they ‘fixed’ the lighting. I can see a tremendous difference between with it on and with it off but my monitor doesnt give me any good options for adjusting the imagery and with the adaptive eye effect (that changes with each airplane you fly) it can really be excessively bright sometimes. But at least the bright reduces the ‘overly yellow’ cloud problem.
I hope Asobo chooses to give users the ability to cap the brightness of the adaptive eye effect so I can set what I think is realistic. Bright? yes. Blinded by the light? no.

Today I spent some time flying in clear skies and the horizons were blindingly bright with HDr on. Theres no reason for that at all. I can see where reflections off water or planes or glass windows might be blindingly momentarily bright and clouds may have a pulsing brightness about them but the clear sky horizon should not be overblown like that.
But then I went to Tampa FL with some clouds that looked truly amazing – even if there were lots of ‘too bright’ places. It was still quite an experience.

Can’t do screenshots with HDR, so I switched it off again

Try Win key+Alt+Prt Scrn key. This is a Windows game bar screen capture function that will create a .jxr file and a .prn file of the screen image.

Then I would definitely say you need to adjust your screen settings for HDR mode. My QLED TV has a game mode that when used with HDR will automatically crank up the brightness to max cause you need to turn up the nits for HDR.

I don’t like HDR at all. Looks too colorful to me.

Anyways, just curious how many of y’all prefer it or not.

If sports and movies look great in high-definition, why wouldn’t MSFS 2020? Unfortunately, the sim only supports the HDR10 standard which is the lowest standard for HDR. While it’s better than standard def I’m sure it will get better over time.

I know I’ll never go back to standard-def!

Actually, it is your display. OLEDs, while great for their per-pixel lighting and perfect blacks, cannot get very bright, which significantly dulls the effect of HDR. That means that on an OLED, some of the main benefits of HDR, like realistically bright specular highlights or expanded “color volume” (the combination of the size of the displayable color palette and the range of possible luminance of each of those colors) are not nearly as impactful as they are on an LED TV that can get extremely bright. OLEDs also cannot hold their brightness for as long as LEDs can, and so they all use ABL (Automatic Brightness Limiter) to dim the picture if a bright scene is on the screen for more than a few seconds.

LEDs, on the other hand, can go very bright. The TV I run FS 2020 on is a Sony X930E (a 2017 model) which can exceed 1,500 nits of brightness, and can hold that level of brightness pretty much indefinitely. Most OLEDs can only reach about 400 to 600 nits, and they can only achieve those levels for a few seconds before ABL kicks in and dims the picture.

The practical effect of this is that HDR on an LED TV is spectacular and lifelike. In flight sim, the sky is realistically bright and the sun glinting off the aircraft, off glass buildings, off distant lakes or streams, etc. produces realistically sparkling highlights. The additional color volume produced by the ability to go so bright also enhances more subtle effects like fog and haze. On my TV, if I’m flying and suddenly turn toward the sun or catch a sudden large reflection off the exterior of the aircraft it’s actually bright enough to make you squint, just as you would instinctively do in real life. It’s hard to describe if you haven’t experienced it, but HDR on an LED TV with a high maximum luminance capability just makes everything look far more real and gives it greater depth.

Most 4K Blu Ray discs are mastered at 4,000 nits, and the Dolby Vision standard supports up to 10,000 nits, so you can see how important the developers of HDR content think brightness is to the equation. Sony has demonstrated micro-LED TVs that can reach 10,000 nits, though they are so far only prototypes or very expensive units for commercial use, but it’s only a matter of time before that technology filters down to consumers. Micro-LED is already available to regular consumers, but more in the 1,500 to 2,000 nit range so far.

Not to knock OLED, because it definitely has its strengths (and there is no perfect TV technology - each involves trade offs), but OLED’s ability to wow you with HDR is severely compromised when it can only produce a few hundred nits versus LEDs that can display a few thousand currently, and mastering standards that anticipate luminance levels as high as 10,000 nits eventually.

Try Win key+Alt+Prt Scrn key. This is a Windows game bar screen capture function that will create a .jxr file

Thanks for this. I just discovered that the Windows photo viewer can actually view the .jxr files. I wonder if we can upload them here? EDIT: nope, cannot upload .jxr files. oh well…someday soon I would think.

and on another note: does the ‘Bloom’ switch not work with HDR on? It doesn’t seem to do anything that I can tell.

Thanks for this. I just discovered that the Windows photo viewer can actually view the .jxr files. I wonder if we can upload them here? EDIT: nope, cannot upload .jxr files. oh well…someday soon I would think.

The .jxr file won’t upload to this forum because the file is too big. It is meant to be displayed on an HDR screen because it has HDR screen attributes embedded in the file so probably don’t want to upload it to this forum anyway. Just use the .prn file to upload and if it’s too big you can easily downsize it.

and on another note: does the ‘Bloom’ switch not work with HDR on? It doesn’t seem to do anything that I can tell.

I would recommend using the Windows HDR screen calibration app to calibrate your HDR screen first - it’s dead simple to do. Here is a link in the Win 11 app store: Windows HDR Calibration - Microsoft Store Apps

Thanks for your info & knowledge concerning HDR.

In SU10, you couldn’t turn on HDR without jumping through hoops but in SU11, that got fixed and HDR now works. It’s interesting that you had HDR working in MSFS at one point a while back but now it’s not. I’ve cut and pasted a table which shows for the HDMI 2.0 spec which resolutions HDR will work with. 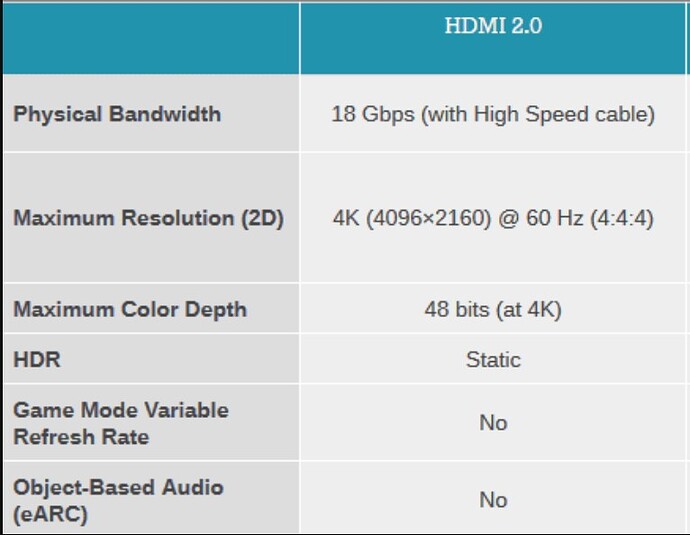 Note that with HDMI 2.0 at 4k resolution it will only support a refresh rate up to 60Hz. Also, if you are using Nvidia Gsync or AMD’s Freesync it will cause HDR to not work. Bottom line is that if you turned on some additional features or upped your refresh rate it could impact HDR.