Welp, first benchmark right here without DLSS. By the looks of it, it might be the answer to give at least 70+ FPS on MSFS no matter what resolution. And that’s with DLSS off. 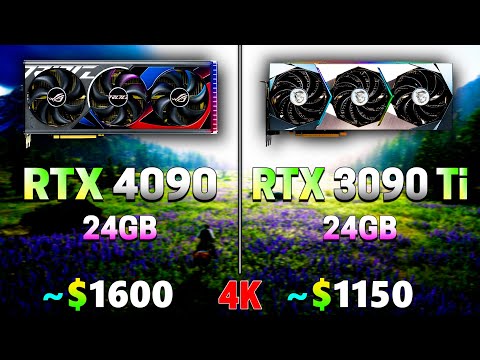 Is it worth it ?
Well, to me, NO. It is not worth the price.
I tend to be annoyed when a company “gouges” my fellow citizens.
They know they have and so do we.

If you slap that card into some older system to replace a 3090ti there won’t likely be much difference on MSFSs end imho.

Not to mention next year Q1 or Q2 NVIDIA are going to be swapping out the memory modules on the 40XX Cards for GDDR X or 7 I cant remember the name. This is expected to bring 20% more performance and lower power draws. The memory can only be delivered next year however. If you can wait, I would wait. I have a 3090 and as long as I am getting +30 in MSFS I dont care, things like Spider man etc I am getting 60+ @4K max settings with DLSS.

Wait until MID level 4000 series that support DLLS3 instead.

How come the embargo hasnt lifted for anyone else? And he didnt test DLSS 3? I’m a bit suspicious. Could a viewer cash in

I could get about 8 hours of flight instruction time for that price.

A 5090Ti GDDR7X 48GB paired with Lunar Lake + „then-popular“ DDR5 would be my own dream for next two years.

I spent more on that a year ago for an MSI 3080ti, with half that VRAM.
That might be true for a great many.

No way are they/we spending that a year latter. We already chased the cards which should have provided an optimal experience for MSFS 2020. If it can’t be made to shine on the better 30-series cards…

A bit too late, I think.

AMD has yet another opening to seize a large chunk of the user base. But will they?

Well, during the Covid and the crypto boom, 3090’s were going for $2000+… To get more than 60 FPS in nearly every situation, extremely stable VR performance, and the prospect of DLSS 3.0 introducing a native motion reprojection-like feature sounds incredible.

Also, considering current inflation, a Titan Pascal in 2016 was $1,200 - That’s about $1,500 by today’s standard. The 4090 will be the best card on the market, just as the Titan was. I really don’t think their pricing is that outlandish, they’re just marketing the top of the line card more intensely, where as the Titan Pascal was released after everything else was. In this case, they’re just putting the high end card out first.

But really, as flight simmers, many folks are happy with 30 FPS, and today’s hardware can easily achieve 30FPS in all situations. I don’t see that crowd updating their hardware any time soon.

Then there’s the 60 FPS crowd. I think this new generation of hardware will allow MSFS to get 60FPS in all situations (on ULTRA settings), and 45 FPS in VR with high settings in all situations. This is honestly a bit sooner than I’d have expected, still thought we were a couple of generations away from that, but everything is looking promising.

A 4090 paired with a 7800x3D processor will probably be the best flight simulation setup. Until this hardware actually releases we won’t actually know, but this may be the generation many folks sit on for years to come.

Official review embargo hasn’t lifted yet. I wouldn’t trust these ‘last minute benchmark leaks’ videos trying to cash in on the hype.

Do you have any sources on this? I dont see any sources claiming this will happen and I think its highly unlikly.

So I don’t see a test with MSFS here, what’s the point if we
are CPU limited (no matter how fast)
Even my RTX3090 is not really used to capacity and if you give LOD over 200, it is so and so over with the FPS.
I’m not stingy at all, but here in Europe we’re talking $2000 - $2500 (at the moment) - used to completely assemble a mid-range computer and that’s just for a graphics card - yes performance or not but then where’s the limit!
It’s always the same now or the same shame - everything is unnecessarily hyped and I haven’t seen any significant difference between swapping from the 2080Ti to RTX3090 (at MSFS).
Advancement or not - the price is still not really justified, but NVIDIA’s shareholders need to be kept happy - that’s all this is about.
I’m not sure, although this is my favourite hobby I’m willing to invest so much in, but that is only my opinion,
everyone should do what they think is right.

Indeed, I will be waiting for the 4090 Ti FE as well. At that time if anyone here in the UK wants a 3090 with one careful owner, and an average amount of miles on the clock, PM me.

Perhaps we need a Hobbs meter for GPU’s…

Well, according to NVIDIA, the 4090 is supposed to provide CPU with enough help and reduce workload. Something like that. Which is why it supposedly gives it a big performance boost.

But yeah, I think we still need to wait and see.