I’m looking to upgrade my old Logitech Ectreme Pro 3D. I have a few things I really want.

Joystick thumb trim buttons. So trim up and down in my thumb while holding the stick.
Thumb hate button.
A few other assignment buttons on stick for things like breaks (I use trigger) and would like a suitable PTT button for Vatsim.

I’d love a throttle with detents. But think that will blow my budget.

And twist for rudder.

Is there anything that won’t break the bank?

VKB Gladiator NXT. I have the premium edition but the standard should be fine for MSFS. As for the PTT on VATSIM I use the red button.

Not sure what you mean.

The deflection range isn’t too short ?

I can make a video if you want.

Why not ! Thank you.

Topic moved into #self-service:peripherals and tagged with #advice.

This is bone stock without adjusting the sensitives at all, I’m sure it would be better if I tuned it.

That VKB Gladiator looks amazing. But I’m lost a bit on the chat afterwards. Is there a deflection issue with it?

That VKB Gladiator looks amazing. But I’m lost a bit on the chat afterwards. Is there a deflection issue with it?

Not that I’m aware of. 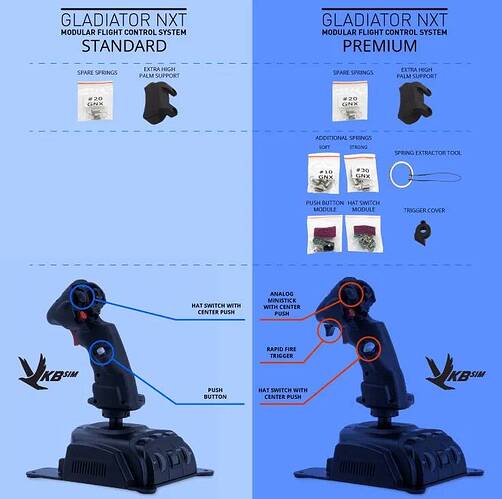 Thank you so much for the video

I use Saitek X52 Pro. Decent enough and certainly won’t break the bank

Happy to have been of help!

Thanks for the comparison. This looks pretty perfect. I guess the throttle has no detent. Not the end of the world. I mostly fly GA. Hoping to get more into the Airbus. Just battling to unlearn the XP11 Zibo 737.

Can the rotorry dials on the base be somehow used to change heading/altitude? In VR it’s so hard using the mouse on those. Even on desktop screen, with movement, I find it hard. If these rotorry knobs could be used to change thr altitude and heading - that would be crazy cool!

I bought the Vkb Gladiator Premium 2 weeks ago.

Before that, I had a Logitech G Extreme 3D Pro for years which is completely sufficient for beginners and is also a good all-rounder.

When the Logitech was slowly worn out, I bought a Titanwolf Vulture plus the extra Throttle.

The Vulture was a waste of money, cheaply processed, too light springs and the worst: it lags with the inputs, if I move it it takes up to half a second until you can see the effects in the sim. And then they sell this thing for 80 € ^^

Precise flying is of course not possible.

The Titanwolf Throttle is ok for the 40 € it has enough buttons etc. and can be easily combined with an existing joystick.

Then I got the Logitech X52 Pro which was a significant difference to the two before in all respects.
The joystick is just a little big and doesn’t sit well in the hand, the springs are a little too soft for me, but the throttle is great.

When the X52Pro got older, I looked for a replacement and then bought the Gladiator.

And they are 2 different worlds.
The Gladiator is much more precise and has hall sensors even on the rudder axis.

Lies 1000 times better in the hand and has better quality buttons and switches. The feeling using this thing is another level compared to the other before.

So I really recommend the VKB Gladiator, whether standard or premium everyone has to know for themselves.
The part is definitely worth the money and feels 5 times more valuable than the others described.

So now i use the VKB Gladiator plus the Titanwolf Throttle and im fully good with it.

Can the rotorry dials on the base be somehow used to change heading/altitude?

they should be, i use them mostly for trim, so basicaly the same thing.

Edit:
Tested it and yes works without a problem

For those new to joysticks, standard resistive element potentiometers wear out over time and cause glitches in your controls. Most cheaper sticks use pots.

For those looking to avoid that headache, look for joysticks that use Hall sensors. Those don’t have contact between the magnets and sensors, don’t get glitchy, and last much longer. Other stuff has to fail to ruin the stick.

Or, just be aware that with heavy use, standard pots wear out. Some are commodity items that you can get replacements for through electronics parts houses. Some are full custom and if you can’t get parts through the manufacturer, you’re buying a new stick.

Just got through replacing the rudder pot in my Thrustmaster T-Flite HOTAS. Decent quality potentiometer but slop in the handle rotation axis (twisty stick) allowed loads that caused the pot wiper to lose contact with the resistive element and really bad glitches. Without buying replacement parts and a little stick surgery, I’d have had to throw away a year old stick.

An option that is even more budget friendly is the Thrustmaster HOTAS X. It’s not as fancy-looking as some of the suggestions here, but it is a perfectly competent HOTAS with twelve buttons, a HAT switch, stick rotation and also an analogue “rocker” axis on the throttle. (I use it for rudder, rather than twisting the joystick.) The throttle can be detached from the stick to suit, though I keep it attached so I can rest the whole setup in my lap.