Just found out about this new release. It’s absolutely huge!

I remember some people have complained about the default airport, hope it’s much improved now. Anyone with first impressions?

And now Asobo’s release of a KATL with the next World Update has no urgency. Will they still release it as they said they would , or make a minimal effort at it now that a developer has released one on the Marketplace?

Anyone with first impressions?

Just bought it. Will let you know.

How are the runways modeled? Flat or sloped? 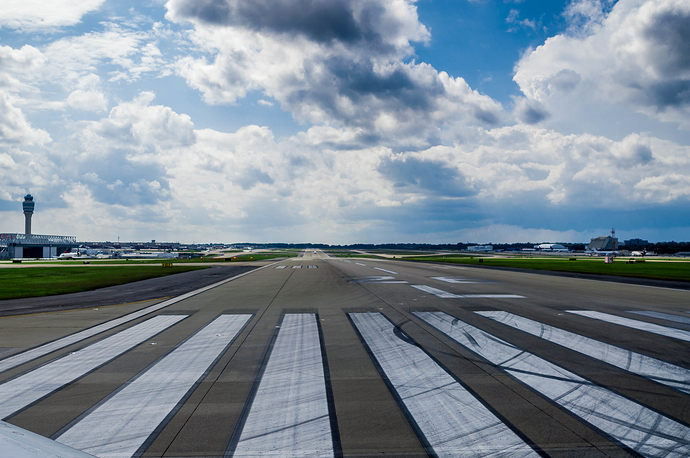 Heard Asobo is bringing this handcrafted in update 7.So far I have not been impressed with the default airport performance and visuals.It will probably purchase this.

Born in ATL, airport in Sim now is fairly good. Asobo’s will be much better, and every time they release a patch/update, you have to reinstall this new airport into sim, and the developer will have to release a new update, because generally Asobo’s fixes break aftermarket items. I aint buying nothing except the IFR Training, for this simulator, I don’t want dozens of things I have to remember to move each and every patch cycle so the Simulator does not CTD or not even open up. Good Luck.

Trust me that won’t stop people from buying this and I doubt the Asobo version will be better.We shall see.The default airport in the sim is a far cry from what it looks like irl

Off Topic Some: - In FSX I fly mostly the C-17 so military bases for most part. Have tried the 737/747, but on approach, I cannot see out of the front windows, so do not have visual on RW, keyboard controls to raise my position don’t work for me. And the approach into KPDX is one of the most beautiful ones you will every fly, just a wonderful experience going down the Columbia River Gorge.
However, we try to avoid ATL and it’s AP like the plague. At least 3.5 million id-10-t’s live there. It’s not the town I was born and raised in, it passed crazy long time ago. Although got to say, we flew out of there last year to go get a new RV in Oregon, the security was faster than I thought it would be, especially as it is the worlds busiest airport. KDFW actually has the best security bar none. Every airline has a place, you go to the door closest to that gate, enter the door, security is right there, once through that, you are in the terminal. Food/beverage/ etc. in every terminal, and just an easy AP to get around in. Worst possible experience is KPDX, takes forever to get through Security, when lived there, I always added an hour to my schedule so I would not miss plane.
KSFO is also a great approach, and it’s laid out well, at least the Runways are. Right out over the ocean and coming into being able to see the skyline is great. Have not flown into/out of KJFK, and need to plan and execute flight into and out of Maine, just to see what is there.

Here are a bunch of pictures. 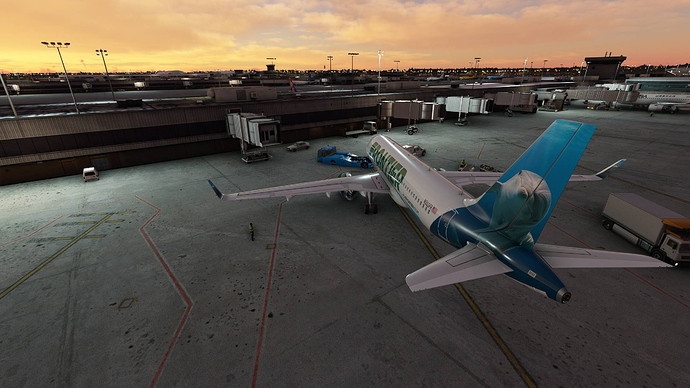 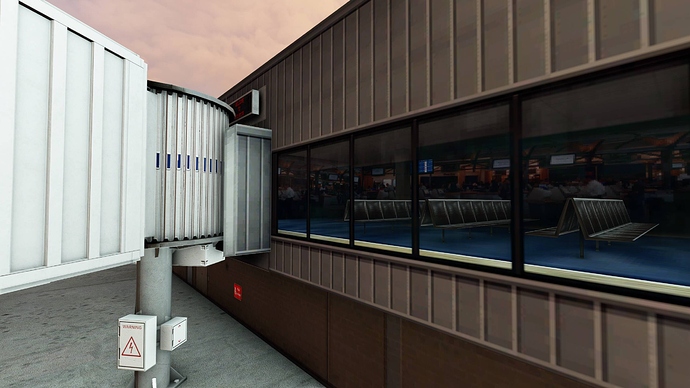 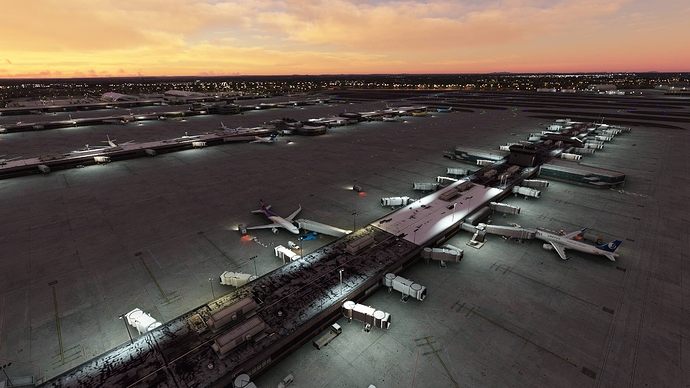 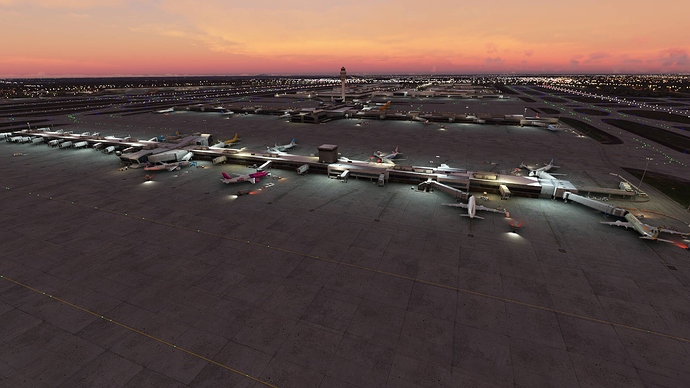 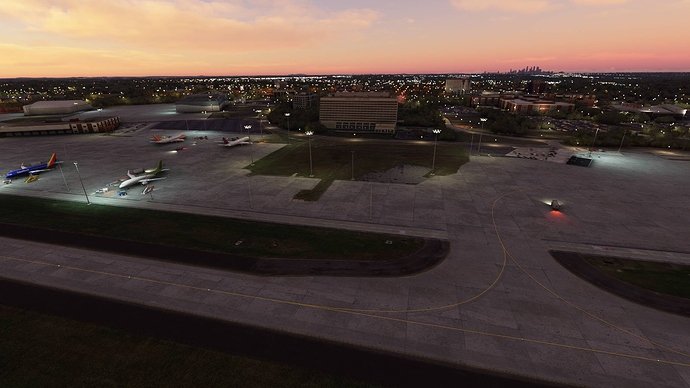 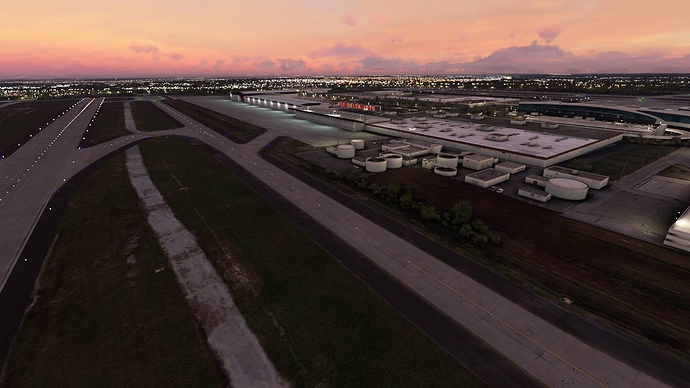 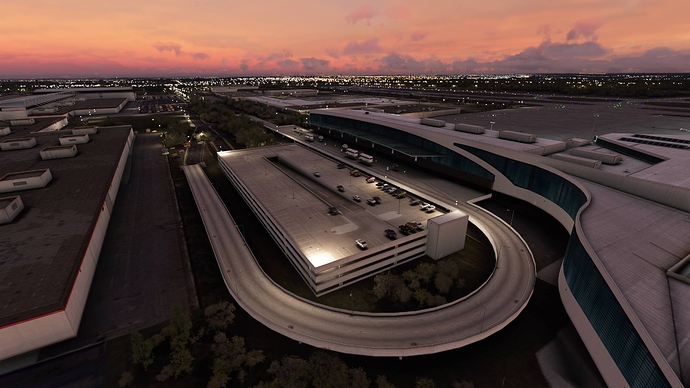 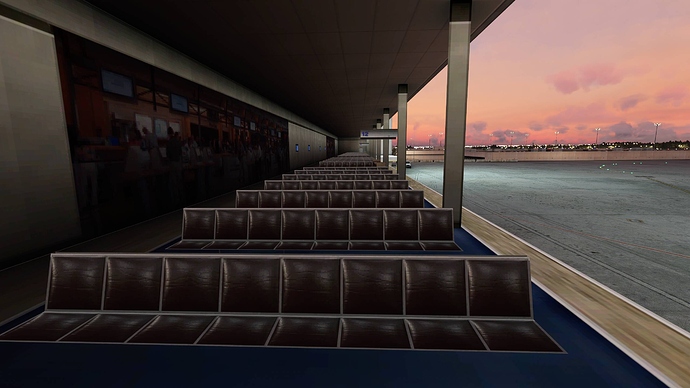 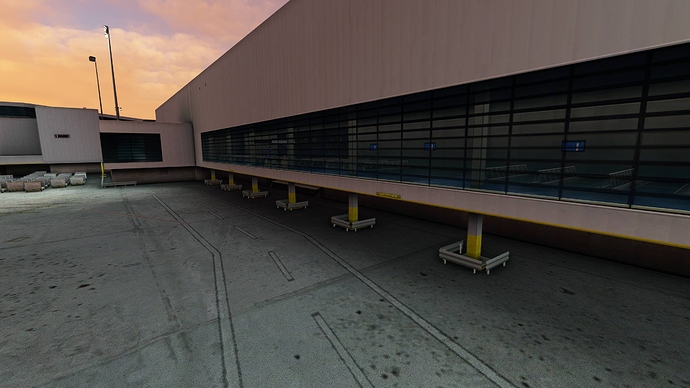 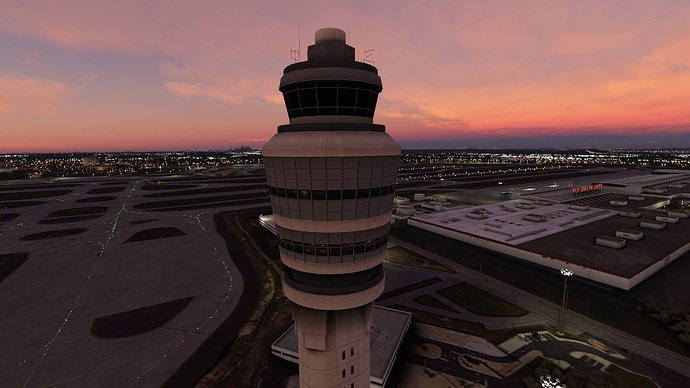 Great screenshots. Thanks for sharing.

Born in ATL, airport in Sim now is fairly good. Asobo’s will be much better, and every time they release a patch/update, you have to reinstall this new airport into sim, and the developer will have to release a new update, because generally Asobo’s fixes break aftermarket items. I aint buying nothing except the IFR Training, for this simulator, I don’t want dozens of things I have to remember to move each and every patch cycle so the Simulator does not CTD or not even open up. Good Luck.

I bought this yesterday. It’s very nice and will likely be head and shoulders above even the enhanced hand crafted update.

Taxiing past the “Fly Delta Jets” hanger alone was almost worth the price of admission.

Looking good minus the annoying stuttering in the sim atm might be worth picking up.

No, have not purchased anything in MP. I just bought the IFR Training from Sim-Market, and have not checked the ATL package you speak of. Every time they issue patch, aftermarket stuff breaks either it or the simulator. I refuse to chase my tail fixing things every time that happens. I am going to wait until this thing is at least 75% more stable, then might buy some stuff. I am not Criticizing your enthusiasm of the product, I just think any purchase now is premature. Nice Video, here is Flight aware showing real time traffic, when I looked, about 6 planes in KATL area, i.e., arrivals and departures. When normally, about Takeoff-Landing every 15 seconds when normal operations going on. Bleak now for sure. Also assuming, no copyrights gained so airliners are without livery’s, same in game, but ATC is calling some by company. Like I said, long way to go. https://flightaware.com/

It also should be noted, Delta air lines has NO Boeing 747-800’s in their fleet. One is shown in the video. www.deltaair.com search for ac types.

And, it’s very accurate, as the concrete batch plant shown in the video is in real life there. I found it in google earth, must have one almost at AP because of all the construction which takes place there almost 24/7. Interesting, I would have never known that fact. Google earth picture is from April 2020. 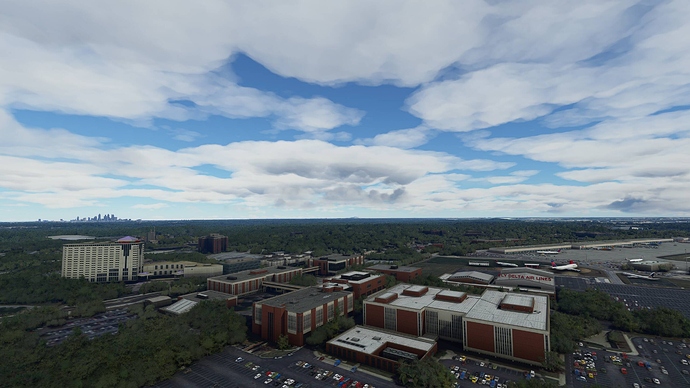 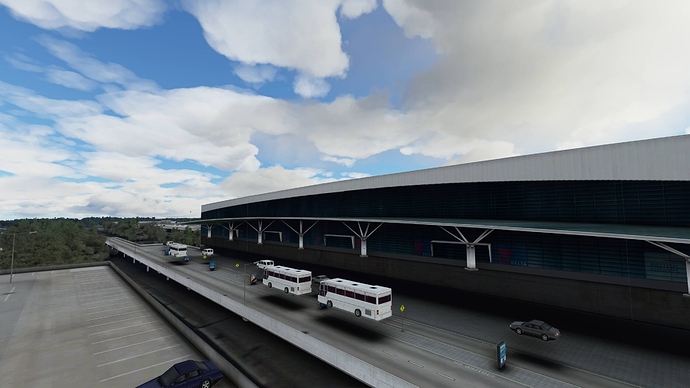 [EDIT]Sent this in to ImagineSim and heard back almost immediately. They confirmed that they will be issuing regular updates to the scenery and that they have already fixed this issue in an update scheduled to be sent to the Marketplace this week.[/EDIT] 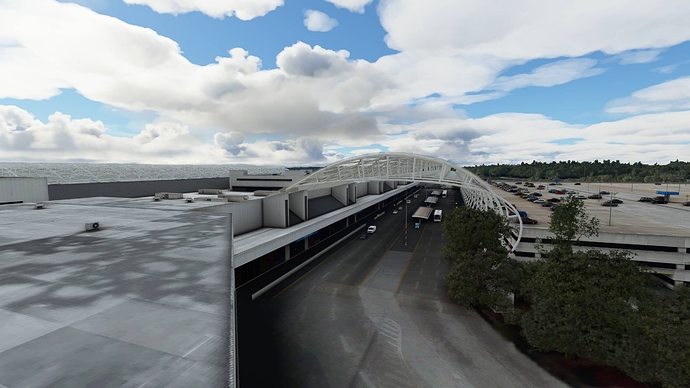 image2560×1440 275 KB
The main terminal entrance area is much better. No modelling of the interior though. 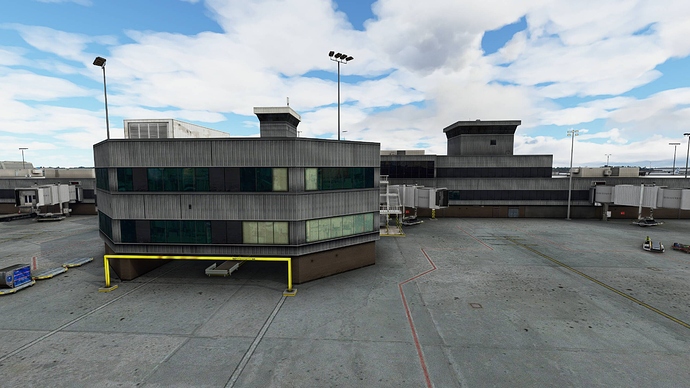 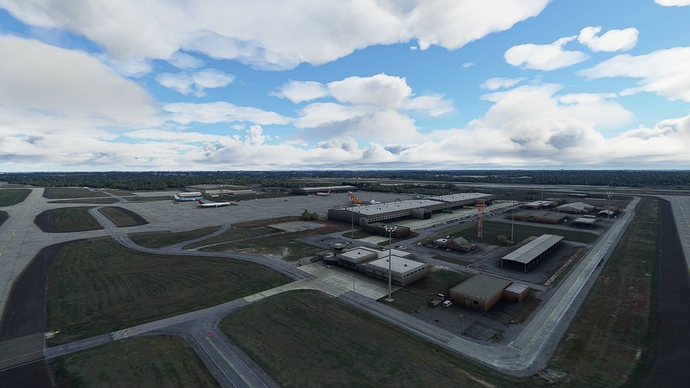 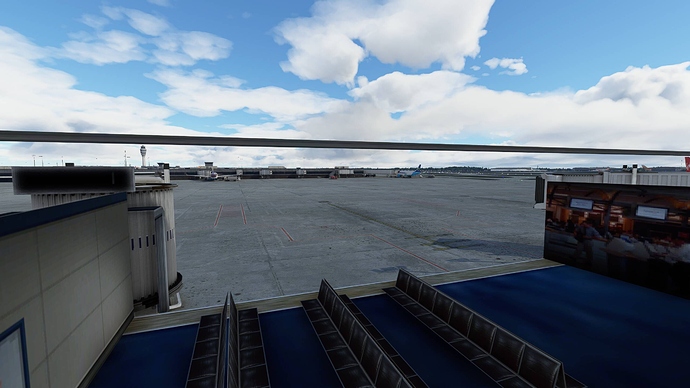 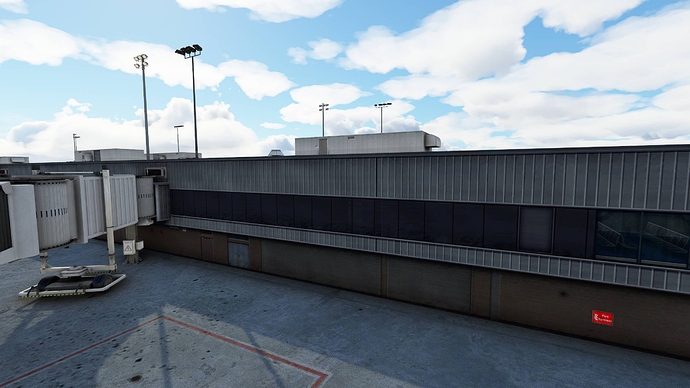 well giving the Fact GAYA are doing the world updates alongside Asobo and the stunning WSSS we got with Japan update i fail to even agree with your comment. One thigns for sure the handcrafted one wont have the floating cars etc like this payware in the above screenshot

Well one thing for sure with the rate of things are going I am not expecting KATL to be actually fully accurately represented such as Delta hangars etc due to copyright reasons.Payware will always be better than default.The guys at Imaginesim guys here mentioned it will get updates so sit back and enjoy the ride! Floating objects happening with default scenery too!

nothing to stop the community releasing “a mod” that can apply real world branding.

Nobody is forcing you to buy it.Not interested? Move along and wait for the so called Asobo version.