Couple questions I was hoping to get some help with on the new Kodiak.

*"The SWS Kodiak comes equipped with a detailed ECS as well as simulated heat *
*transfer between zones, temperature change from opening the doors and window *
and heat leakage between aircraft and the outside environment" 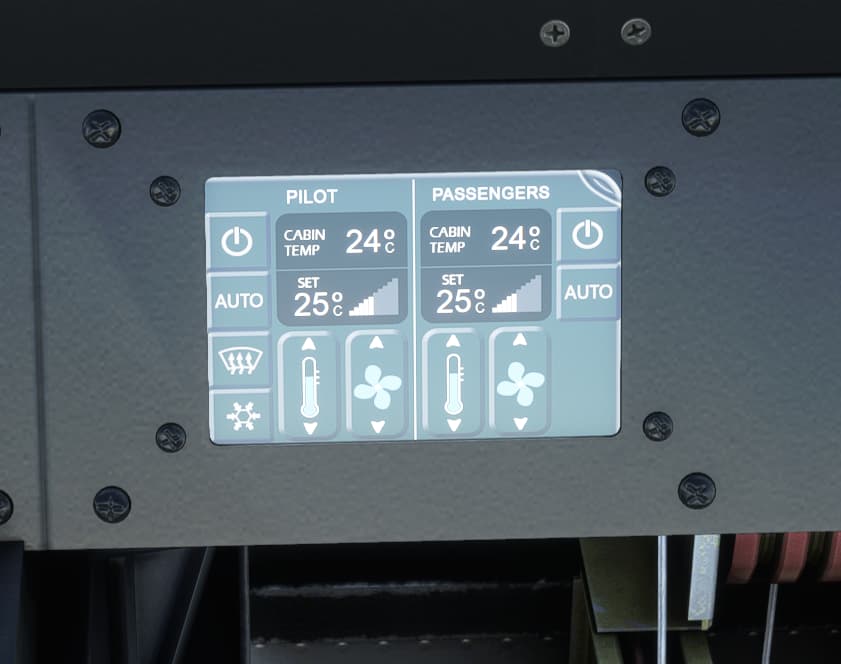 Thanks for help with these! Great plane overall just a few things to iron out.

I believe number 3 is on Asobo’s end, since the Nxi covers so many different aircraft.

On #2 – It does work; I’ve seen it working on mine. I think the problem you’re seeing is that the plane apparently initializes at 25 degrees, but doesn’t start to change to ambient until a variable arises that would cause a change to occur.

In other words… I bet you’ll see it work if you open a window or door.

I had the opposite problem, actually – I couldn’t get the cockpit temp up to the selection. It was consistently 10 degrees (F) below or so. Turns out I had the weather window open…

hey there. so yep the system seems to be partly working. the temp def drops when opening a window. however it always starts at 24c and never changes even when climbing into the frigid atmosphere.

it should work by beginning cold and dark with the ambient outside temp. then it should drop as you climb into the upper atmosphere. currently it remains frozen until you open a window or something.

The yaw damper and the heater problem are some kinda strange things in that simulator that does not seem to operate correctly in various planes.
The PMDG Cloudmaster has a sophisticated heater system too - but the temperature stays always on a specific (set on the ground) level, for exampe 75 Fahrenheit. This temperature does not drop even when the heater fan is switched off or the fuel to the heater burners is cut, with -30°C outside temperature and with the windows open.
I reported this to PMDG after noticing it, and they promised they will fix it.

The heater of the FlyByWire Airbus works good so far, but I have to admit that I have never tested both engines out on 40.000ft ceiling height with -70°C outside just to see if the cabin and cockpit temperature drops (and if I would do so, the displays showing the temperature would go out after a minute, and when I start the APU to make the displays switch on again the APU is powering parts the air condition and the temperature should stay okay while the APU is running) - that´s why I don´t exactly know if the heating system of the FBW Airbus is fully correctly simulated untill the Fenix Airbus with some intense several hundred pages PDF´s is released to read everything about the Airbus heating and pressurization systems.

The yaw damper seems to be inoperable on the otherwise so detailed and fantastic Aerosoft CRJ 700 too. (Or as many YouTube videos stated, some parts of the overhead and between-the-seats panel have kinda buggy cockpit switch illumination - I don´t mean the cockpit backlight this is FLAWLESS perfect in the CRJ700 and looks fantastic! But the little LED lights in the switches indicating the on/off status of some switches.
Some CRJ700 switches don´t light up at all / or are always lit no matter if they are switched on or off.) The CRJ700 yaw damper is one of these switches - it is always having an illuminated YD logo on the switch no matter if it is switched on or off, and the yaw damper does not seem to do anything related to the aircrafts flight dynamics.

These missing engine gauge labels are a highly annoying bug I have mentioned two times in this forum including screenshots of the Bushpilot Kodiak 100 YouTube videos clearly showing engine gauge labels like oil temp oil pressure ITT and others.
The answer is always “it´s the standard Asobo Garmin1000 but it´s an otherwise good plane…” but in my opinion a 30€ plane SHOULD NOT “use the standard default G1000” but should at least use a modified version of the standard G1000 with correct labeling to prevent fully breaking the immersion every single time I look at the middle cockpit panel

It´s kinda sad that such a beautyful well-crafted plane with such high polygon interior, great texturing and perfect AAA good looks is using these simple and ugly default G1000 for this beautyful cockpit. Even when installing the NXi G1000 the bug with engine labels missing is still there.
I thought a modder might take care of this problem, just like it was done with the JPLogistics Cessna 152 or TBM930 overhaul and Salty747 and many other planes - but no system overhaul mod for the Kodiak 100 mods so far or even planned

I will take them in reverse order:

#3 is an NXi problem. Not all types of labels are supported yet, we hope this will be sorted out.

#2 the plane was made to initialize at 25oC as there are some limitations in the sun that we are trying to work around. Opening a door will change temperatures, but there is a bug that will not allow them to change if you are still on the ground.

Temperature leakage with AC off and while flying (all doors shut) will depend on the temperature difference between cabin, outside air and airspeed. The losses are very low, but flying fast in freezing air should drop the temperature after a while.

#1 coming from one of our Kodiak pilots: the yaw damper is not rudder autotrim. It just reduces oscillations in yaw if, for example, you go through turbulence. You have to trim the rudder manually.

I hope that helps!

The Kodiak is (nearly) all I fly at the moment, as was the case when the PMDG DC-6 was released.

It is a wonderful model, and flies beautifully. Landings are really fun, and I’ve finally got the takeoffs down pat. (Watching all the Missionary Bush Pilot vids has shortened the learning curve and answered several questions as well.)

The Kodiak is an amazing aircraft, and the model for MSFS is quite well done. Cheers!

Firstly allow me to say that this is a wonderful aircraft, and all I fly now. I do feel however that the cabin temperature control needs a little attention. Most of the time I forget to turn on the climate control and the other day I was flying for nearly two hours with the outside temperature at 0 deg C and even with the climate control switched off, the inside was a comfy 25 deg C. It’s not a big deal of course, but it is just another feature that adds to the realism of this lovely aircraft and if you can get it working nicely, well, that would be great!

@SiRRiPPERORiG On the topic of questions about the Kodiak, I do notice that with my Thrustmaster rudder pedals the aircraft will turn really sharply on the ground with even a little rudder input and no differential breaking. With full rudder it will actually turn on the spot! This is not realistic, if you want to achieve something like this in real life, you need to stomp down pretty hard on the break for the respective wheel (left brake for hard left turn for example). I don’t want to adjust the overall sensitivity of the rudder pedals in the sim because a linear setting (as suggested by Simworks) works well for flight control. Is there a setting somewhere in the config files where I can drastically decrease the effect the rudder has on ground handling, thereby requiring differential breaking for sharp turns?

Good catch. I am not the FD modeller so I cannot comment on it.

On the RL Kodiak, the wheel will turn to 57 degrees max IIRC, when you go full pedal AND brake. For our implementation we go 57 degrees with full pedal as we could not find a way to make it work like this.

We are working on overcoming such limitations but until we do, we go with what works in most cases.

Question about the battery.

I always start colddark an turn on the avionics and enter in my flight plan.

However this does not seem to impact the battery. It stays at 25 volt no matter how long I dabble with the flightplan. Also sometimes use the climate control panel and that is also not really affecting the battery.

PS just so nice to be able to ask questions an a real person actually replies. New first ( well there is the Airbus h145 where you can get the same pampering)
for me.

Good question, I always do things this away around as well. The other day I got dragged away by the other half just for a minute !! turned in to half an hour, came back expecting the battery to be as flat as a pancake, but all was well. So I thought maybe it simulates having ground power connected or something when in that state.

Loving the Kodiak as well great job from the team on this one.

We have a rudimentary air conditioning system currently used as a placeholder in the A320neo, but a fully-modeled one is almost here - you can check the progress and take a look at the blueprints and code here:
https://github.com/flybywiresim/a32nx/pull/6220

It stays at 25 volt no matter

Do you have ground power enabled? I use a widget for the stream deck that shows me 2 decimal digits and the voltage goes down the very second I turn on the battery. It just stays above 25V for a while, as the Kodiak has a pretty big battery.

No ground power as far as I know.

Will check and try to leve avionics on for some time to check.

I wonder if someone might be able to help please. I am probably doing something fundamentally wrong, but for some reason I can’t seem to get any audio/sound feedback for the ATC in the Kodiak at all. When I am tuned into ATIS for example, just no sound. I have played around on the Kodiak’s Pilot audio panel, tuned up what I believe are all of the volume knobs on the audio panels as well as the G1000 NXI etc, however for whatever reason I can’t get any ATC audio. I have scanned the forum but couldn’t see an obvious answer, so would be grateful for any help thanks.

I am still struggling with the take offs wit this bird, otherwise landings flying are all awesome.

What tricks/tips can you share for takeoffs? This is the only part that ruins the experience for me.

The biggest thing for me was letting it basically letting it fly itself off the runway, not pulling back too much on the elevator. I’ve found that it really wants to takeoff almost on it’s own and if it don’t fight that then it performs really well. Once it’s airborne, simply let it build some speed flying the runway heading or thereabouts with a gentle climb before you begin your begin your climbout in earnest. 85-100 knots seems to be ok to begin maneuvering away in my experience. Flaps 20 to 10 at 85, then flaps all the way up around 100 and you’re good to go!

tldr: let the plane take off basically on it’s own and let it build up speed before climbing/rolling out. Small pitch inputs on takeoff are really the key element I would say, but other more experienced folks can correct me there.