Ground effect in MSFS feels unrealistically strong and aircraft “float” excessively on landing. I couldn’t find a thread specifically about this, so wanted to start one here to discuss.

It’s hard to quantify, but in many cases (particularly in the TBM and CJ4) it feels like you have to reduce pitch to touch down at normal speeds without floating the length of the runway. In other words, angle of attack at touchdown, at normal touchdown speeds, is significantly lower in the sim than in reality.

The low wings of the TBM and CJ4 will produce some float IRL, but the float in the game feels more like a glider in ground effect than a TBM or a jet. In the sim, propeller disc drag seems to be underrepresented (e.g. this thread), but that wouldn’t explain the float I feel in the CJ4.

Has anyone else experienced this or have a good way to quantify/demonstrate it?

It appears that the ground effect tables with multiple points in previous sims have been replaced with the following in the ‘flight_model.cfg’ file:

Drives me crazy. Thanks for the ground_effects tip

Oh it’s not me! First time flying the CJ4 for the current landing challenge and I was amazed how far the CJ4 with speedbrake on full and full flaps will continue to float down the runway with the stall warning blaring. Like you, I feel the need to fly it into the runway and pitch further down at initial wheel contact to keep it from bouncing.

It appears that the ground effect tables with multiple points in previous sims have been replaced with the following in the ‘flight_model.cfg’ file

Interesting. I don’t have the SDK or any data recording tools for the sim, but for what it’s worth I tried a few different values in lift_coef_ground_effect_mach_table and wasn’t able to notice any difference while flying the length of the runway at a given height + airspeed + power setting in the TBM. I arbitrary tried 0.027:1.25, 0.054:1.25 (default), and 0.054:0.

I always find when trying different values in config files to go extreme with the changes. This way you can see if it actually has any effect at all rather than trying to hit the right number and wonder if the change did anything at all. Your changes seemed fairly close to the default values… go big, whats the worst that can happen?

I notice the same G/E floating everywhere I land and it’s consistent. In the R/W it changes with density ALT, runway type and temperature etc… But we certainly cannot expect the development team to address all of those variables! Having said that, landing the CJ at Jackson Hole at the correct speed, the plane shouldn’t float as much as it does. Even at near stall, pulling back over the runway still gives plenty of float - enough to overshoot the target. I’m not game to play with those figures but maybe the geniuses in development can reduce G/E a little??

Massive changes first, see if the plane reacts, then you know its working.

I’ve played with this one on a few planes and it seems to work. Convert kts to Mach value, and your lift factor value. There seems to no limit to the table, either, with-in reason.

In general, ASOBO has still has a real “weight and inertia” issue with all planes, and they feel like they float on a string almost and won’t settle down on the run-way.

Drag is another that is not really well accounted for.

Any updates on this issue?

In the SDK description of the flight model, there is a listing of the aero parameters from the flight_model.cfg file. There is a color coding (not described) for each of the parameters. The type font color is either red or black, with nearly all of them being black. I believe that the red ones are the only ones used in the modern flight model, while the black ones are legacy parameters.

lift_coef_ground_effect_mach_table is in black, meaning (I think) that is it not used in the modern flight model. I just did some testing using values 0.0001:10.0, 1.0:10.0 and 0.0001:0.0, 1.0:0.0 and did not discern a difference. (If this table is consistent with their other mach tables, the first number is Mach and the second is the scalar applied to lift for ground effect.)

So, it looks to me like ground effect is hard-coded in and is probably based on parameters like wing span, wing area, wing location (high or low), and, of course, airspeed.

This is a major issue with many aircraft, even the one that should be about as correct as possible, the 172.

When landing airliners (B748, B787, but haven’t really flown anything else to check if it is present on other aircraft) at Vref speed as indicated on the FMC, after cutting power at ~30ft and beginning to flare up, the aircraft starts climbing initially and then floats about 10ft above the runway.

Video can be found here; 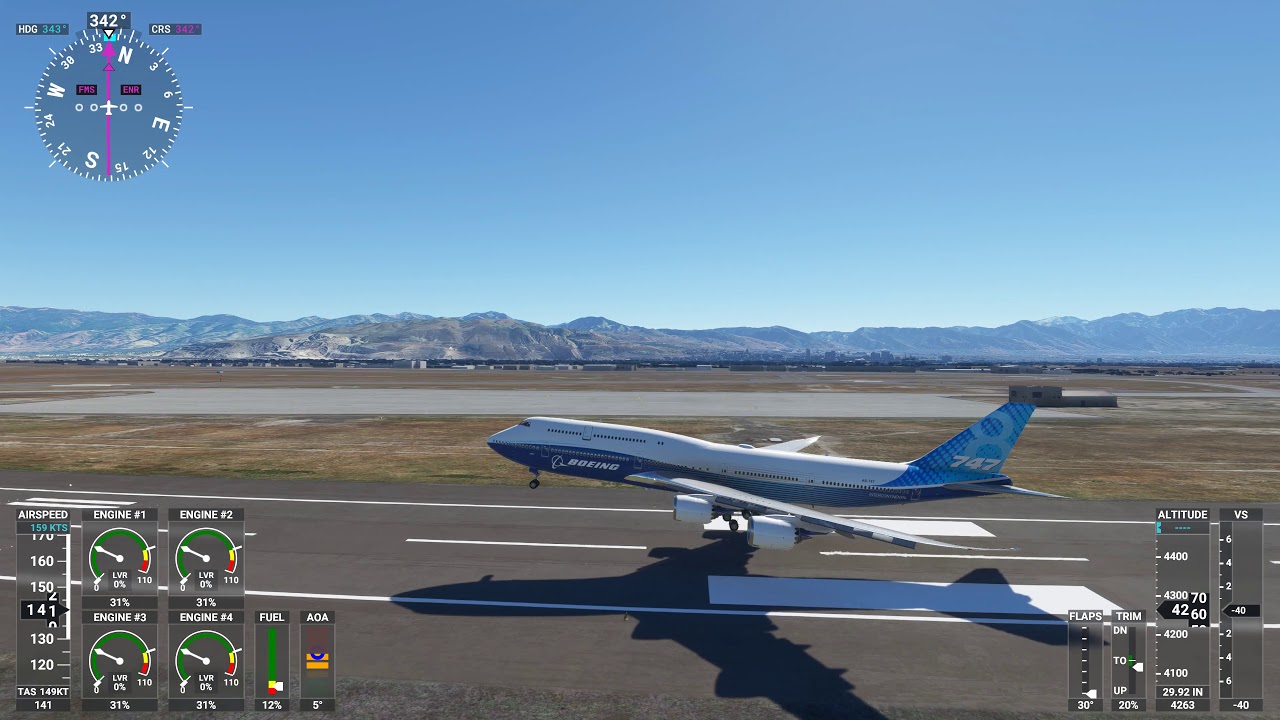 Details;
A landing at KSLC (Salt Lake City) in the clear conditions preset showing off the ground effects which I think are way too exaggerated. I had to reapply power after the aircraft started climbing and then floating down the runway, and ended up getting a touchdown speed of -72FPM according to Gees landing analysis.

Aircraft had a Vref speed of 146kts at 30deg flaps (which was set) indicated on the FMC.

Land an airliner at an airport.

"A landing at KSLC (Salt Lake City) in the clear conditions preset showing off the ground effects which I think are way too exaggerated.

Aircraft had 30 degree flaps set, however I don’t know what the Vref speed was as since the 1.12.13.0. (Sim update 2) patch this sometimes doesn’t appear on the PFD on my system. I used a speed very close to other landings that I have done with similar landing weight where the Vref speed did show.

Touchdown of -382FPM according to Gees landing analysis. 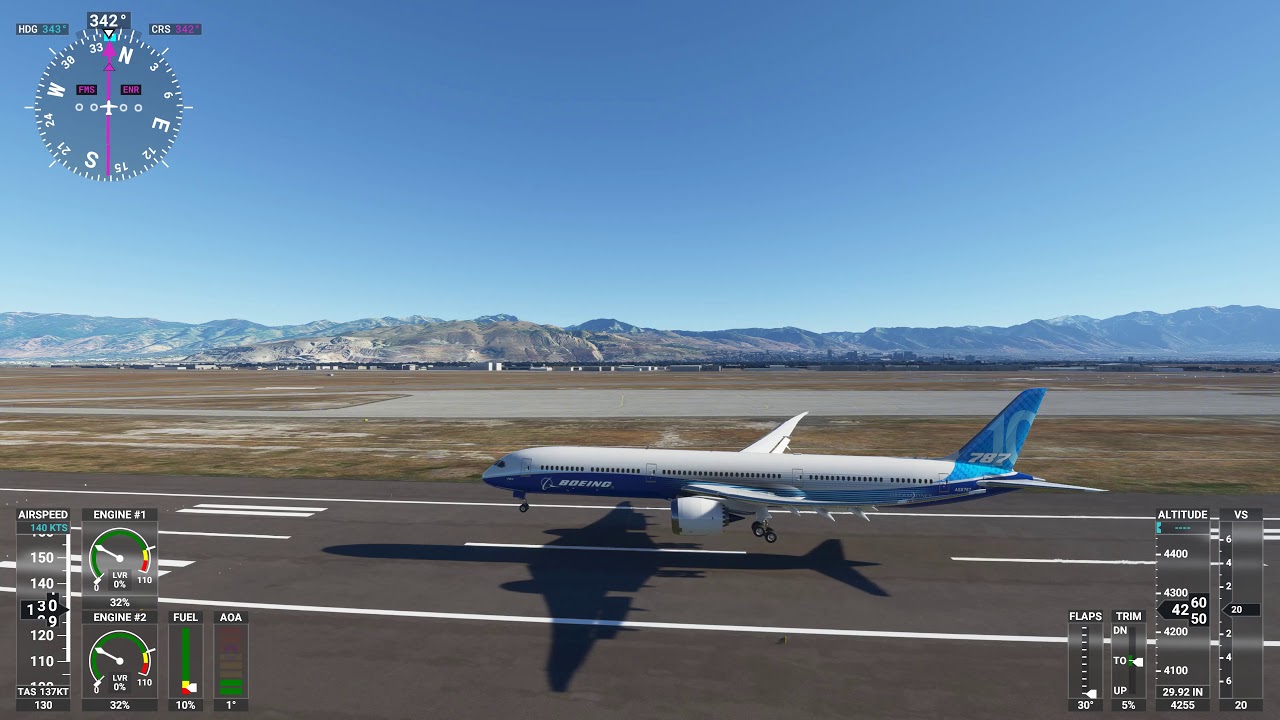 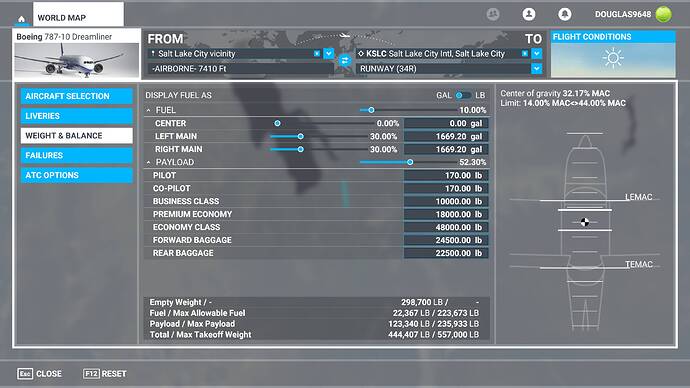 Glad we got a thread started on this.

yesterday I did a test comparing the legacy vs. modern flight model, and as bizarre as it is for me, the legacy flight model seems to behave much more realistically on landing.

realize that in the modern model the plane tends to go up again even with raised spoilers and autobrakes. and speed below the minimum lift speed …

I realized that from 80knos if you pull the stick, the a320 raises its nose in a frightening facility as if it has no inherence.

my conclusion is that i find the FS2020 flight model much more dynamic than the other sims when the aircraft are in the air. however, landing is one of the worst physics, not to mention the fact that the control surfaces of this simulator are so sensitive (probably due to this problem of inertia).

OK so I wasn’t going insane after all.

After about a month away from MSFS (1 week of P3D4 and 2 weeks on a business trip flying an actual airplane) I fired up MSFS only to notice that I had to effectively pitch DOWN to force the airplane onto the ground - this applies to everything from the Mooney to the 747, but the more pronounced the larger the plane. And yes, I’m flying these aircraft at the appropriate speeds for their weight/altitude combinations, so it’s not an issue of the plane simply coming in too fast on approach and ballooning like you see in so many student pilots IRL.

It feels like as you approach the surface of the runway, a giant invisible magnet is repelling the aircraft until it suddenly gives way when the aircraft is moments away from stalling.

For props. indeed the propeller drag seems to be completely missing, I’m also not sure if the propeller spoils the air behind it over the wings MSFS…

As for swept wings, the CL / a curve is much more flat when compared to a straight wing and ground effect should therefore have a smaller effect. Additionally there might also be a drag issue here.

But on airliners the center of lift is acting in front of the center of gravity, the stabilator forces are reversed, in short the complete force balance is wrong so what do you expect

But on airliners the center of lift is acting in front of the center of gravity, the stabilator forces are reversed, in short the complete force balance is wrong so what do you expect

I’m sorry, did you mistake us for a bunch of aeronautical engineers up in here?

Seriously, this is interesting. Are you saying that in general, small GA planes are designed so the CL is behind the CG, whereas on airliners it’s reversed – the CL is in front of the CG? That would mean the tail in small planes would have to exert a relatively constant downforce to stay balanced, while an airliner’s tail would have to exert an upwards force, right?

Why the difference? Is one more efficient than the other? Or is it a function of the higher speed? Airfoil shape? Curious minds want to know!!

It is the case in MSFS somehow. In real life the center of gravity is located in front of the center of pressure, at least in the normal flight envelope creating a nose down moment which is compensated for by downforce on the horizontal stabilizer. This is no different than a small GA aircraft. In MSFS this is completely reversed as can be seen in the dev mode.

It would be more efficient to have the CP located in front of the CG with an up force on the horizontal stabilizer, unfortunately it doesn’t work like that as this would cause longitudinal static instability.

To continue where we left on the topic longitudinal (pitch) stability from the developer Q&A. It is a complex subject with many rabbit holes but I’ll try to keep it simple. Since Asobo announced they are gonna improve airliner experience, please help bringing this one to their attention. The flight dynamics on the Airbus A320 & Boeing 747 (maybe also the Boeing 787) seem completely wrong when opening the Developer Mode. In short the Center of Pressure (lift) is far in front of the Center of Gra…