Ah, I installed Navmap today for the first time (and man what a great program it is) so apparently this added waypoint is a new feature/issue? One of the guides I checked was uploaded a week or 2 ago so I just couldn’t understand why I had this weird behaviour when loading a flightplan.

The added 1st “Climb to 600ft waypoint” is being added by MSFS, not LNM.

ie You will get it in MSFS, even if you are not using LNM

Maybe it’s not working correctly, as my plan showed an immediate 45 degree turn to a point 3 or 4 miles away. Also, it’s not a particularly useful feature for bush flying, in my opinion.

[Edit] I just remembered that there is a heliport on the runway heading so maybe that’s why there’s the 45 degree turn; however, 2020 doesn’t show any heliport at that location and it also doesn’t show in the satellite imagery.

so I usually don’t turn it on at all.

Maybe the MSFS rules to add that extra WP, needs a little enhancing ??
But its a start, compared to what it was a few months ago.

Maybe, when Bush Flying, don’t be quite so eager to slap on the AP at low altitudes

Yes I noticed that, when I open the plan in an editor that extra waypoint is not there, MSFS adds it after loading it. And again it’s not a real issue, I just found it weird that I had this while i couldn’t find a single post from someone having the same happening

Well, I see it as well, (since SU6 I think) and thought it was quite an Acceptable addition, even if a little messed up VFR / IFR etc etc. And why 650ft ?? Interesting altitude to have picked !

Ok that is weird too. In the plans I made the added waypoint lead me a short while in the direction of the runway, which makes sense after N6722C’s explanation.
But it’s still very helpfull for bush flights I think? I made a route along roads, lakes, stuff like that, gave each waypoint a description (although I have to figure out how to make that description appear in the MSFS navlog btw), but it works great.

I’m not a BUSH pilot, but do they really program their GPS’s to have such a detailed Flight Plan , to fly on AP – especially just after takeoff ?

I don’t know if that reply was meant for me, but I don’t use AP for bush flights and for this plan had my altitude at 1500ft.

I rarely use AP on bush flights, it just so happened that last night was one of those rare occasions!

This has been happening to me and started right after the hotfix following the last world update. It doesn’t break the sim, but it would be really nice if this could be corrected in next sim update. This would make the sim perfect for me.

And why 650ft ?? Interesting altitude to have picked !

That is very close to 200 m, coincidence? Does it mean anything?

Reloading the flight plan doesn’t fix it for me unfortunately. Are you sure reloading it works for you? Have you tested this recently?

On a semi related subject, the Flight Plan as depicted in the MSFS “VFR MAP” seems not to be the same as that depicted in a GPS.

IT seems that Asobo has decided to add some “Curve Smoothing” to changes in leg heading, and seem to have matched that “smoothing of a turn” to match the higher speeds of Airlines, making it totally inappropriate for slower GA Planes.

In addition, the Magenta leg on the “VFR Map” often extends considerably past the leg’s end way-point, where it does not do so in the GPS display. 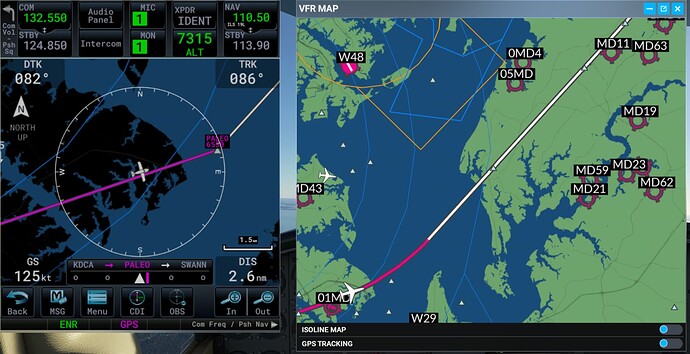 In the above screen shot, it can be seen that the “VFR MAP” magenta line curves and does not go through the way-point (Palleo) in an excessive way that would not be appropriate for slower flying GA planes, while the GPS magenta line goes to the the Wayoint, and is the actual path the plane will fly when on AP, using the FP in the GPS.
. 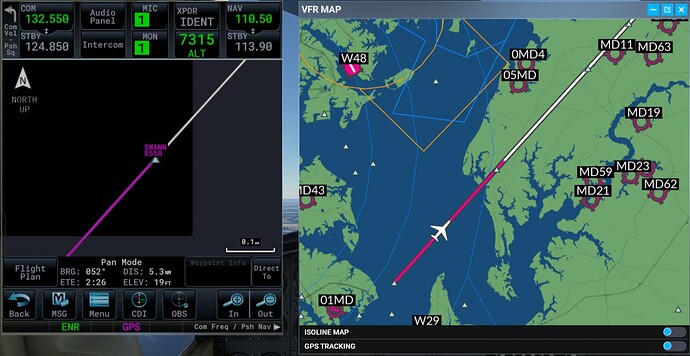 This the above screen shot, it can clearly be seen that in the VFR Map, the magenta line extends way past the end of leg way-point.

(Granted, this is more Cosmetic, and would seem to be a coding error in plotting the Magenta part of the Leg ? )

Do the CURVES really matter – probably not, as the “VFR MAP” is 100% a “MSFS SIM Feature” (like the World Map) , and not a realistic representation of anything similar in the real world.

Yes, it always works for me

Doesn’t work for me either.

Depending on the GPS, some users have had luck with inverting the flight plan twice. This removed the TIMECLIMB, and other inserted waypoints.

@N6722C Yes I noticed that too, the line on the vfr map doesn’t fully match the waypoints, the line bends way before each actual waypoint. Other weird things happen too - often the first part on the map isn’t shown at all until I fly for a minute or 5, then suddenly the line appears.

I think this bug has been logged already guys:

Asobo are already aware of it and hopefully it will be corrected in SU7, fingers crossed!