So when I am not online, I usually fly with the PF3 (Proflight Emlulator OnCourse Software) or with Pilot2ATC.

I also use those tools but not everybody does and many use the ATIS to compare the weather in the sim to what is displayed. ATIS should have the most updated weather and the insim tool should report correct things. That is really important

If the ATIS report correct Asobo can tell all the users to check ATIS for recent weather updates from Meteoblue. Also the ATIS data could be sent to other out of the sim planning tools via simconnect. But that only works if ATIS report correct thing of the weather in the sim. If that doesn’t work propperly we check for other sources of weather to find a match and those we know since release of this sim don’t match either because they are not observations of the sim weather.

The ATIS can’t tell IFR only condition when it’s clear weather for example. Thats totally wrong. And thats not the weather we have in the sim that is wrong. It’s the ATIS. I can’t understand why this has not got more attention actually. I asked that in a Q&A and got maybe 5 votes or something. Isn’t ATIS a really important thing to report correct information? To me it’s much more important than a real world METAR matches the weather in the sim because ATIS should report the most recent information about the weather.

no, that’s clear of course - I just mean that the SIM Weather might show the right thing as opposed to the internal ATIS report which is wrong in any case !

All I’m saying is that the weather should not just look good, it should be realistic as well and match the real conditions fairly well to which I think everyone would agree. Ofcourse we can’t have real life visuals for the entire world so which is why third party addon developers have been relying on METAR reports since ages. The extent to which they can interpolate and merge it in the weather model varies and which differentiates a good addon from bad ones so that makes the current MSFS implementation bad since they are just shoving the METAR conditions.

Now, let’s not suggest a band-aid solution here and keeping the wheels spinning. In fact, Asobo introduced METARs for a reason so most likely it’s not happening anyway which is why I’m keen on an overhauled weather model which seamlessly integrates local conditions with global weather model. There are many more elements that we would like to see going forward which devs used to discuss till last year but atleast as a first step, we want to get the basics right.

Where are all the thunderstorms?

They have been missing for months now. Seems thunderstorms are not simulated currently at all.

We used to have constant lightning when it shouldn’t have been there, now we are at the other end of the scale with no lightning or thunderstorms at all.

Hope we will see a return with proper simulation of those.

Lightning is there, but not where you’d expect it lol.

Lightning inside the cockpit Weather

[uuuuh what] Some streamers managed to capture a video. Also, how come the lightning is shooting from such lousy shallow cumulus clouds? There’s no cumulonimbus around. Lightning and weather sure needs an overhaul.

Agreed, but think about this, we are talking of a basic feature that should be in a sim, which is not correctly implemented. This is 2 years after it’s release! Just waiting for it to be fixed, we would have to spend years with bad stuff.

Stuff under development/progressive updates are for Beta testers, as they can give feedback.

We get releases after releases of features that are not fully/correctly implemented, and then the whole community has to wait for it to be fixed.

Ideally, it should be alpha testers/voluntary beta testers who use the under development features, until they are nearly perfect(nothing can be perfect, I understand). Only then, it should be put to the end-user.

Note that some users just buy the sim for leisure. They shouldn’t have to deal with this.

This message is for Microsoft/Asobo, to understand our pain. This sim is so beautiful, and it can be so amazing!

MSFS is so perfect that it actually looks imperfect

its june 6 in juneau ak Im using active weather or live weather by MSFS and for some reason I’m seeing snow on the ground with 56 deg weather and rain. I even pulled a cam of the port of Juneau and the dock is wet not covered in snow. I’m hoping the team from Asobo reads these posts and learns this is not a perfect sim. far from it 56 deg weather and snow on the ground…

ts june 6 in juneau ak Im using active weather or live weather by MSFS and for some reason I’m seeing snow on the ground with 56 deg weather and rain. I even pulled a cam of the port of Juneau and the dock is wet not covered in snow. I’m hoping the team from Asobo reads these posts and learns this is not a perfect sim. far from it 56 deg weather and snow on the ground…

Snow coverage in the sim is awful, the resolution of the map they use to determine coverage is too high. See these thread also and give a vote:

this is a similar topic… if you guys want to check it out: Snow partially at low altitudes at 19°C in LOWI

Snow partially at low altitudes at 19°C in LOWI Weather

hello Guys, no fix in side for the “too much snow” problem? I get snow in himalaya at 6000ft and 12C in Juni

Remember, as stated by Asobo that weather is an on-going project, after so many complaints on release about it they ‘are’ completely redoing the whole system. So wait to complain until they actually post that they have finished the weather system. Then you can complain.

Complaints, constructive criticism, and corresponding Zendesk tickets should be used as an indicator of how keenly the community feels this issue is affecting them. If we stop talking about it, there is the danger it could slip, and not be seen as a priority when scheduling in what changes make which SU.

On that basis I would advocate the opposite. But it has to be registered in the right way, not a ranting response to a thread.

Yes you are right, Asobo is constantly working on it and we appreciate their effort. What is really frustrating and source of many complaints here is that at release weather depiction was really realistic and very nice. People were not complaining so much, just requesting for improvements related to winds, turbulences, lightings, temperatures, METAR integration. Unfortunately since SU7 and METAR integration they broke how clouds are depicted and it really breaks the immersion. Why are they trying to rebuild everything (that will take months if not years to be back at level it was) if they originally had a very good weather engine with multi layers, clouds variety, good overcast like IRL and just needed some improvements. Meantime many people stopped playing or are not spending hours as at the beginning because weather looks unrealistic, not challenging, break the immersion for people that are looking more for a simulation than a video game. Some people like me just simply don’t understand why weather regressed so much and no explanations have been officially provided, just suppositions from the users that are interested in that matter since for a flight simulation, weather is really important.

Now same problem as many updates back!

I set LZPE airport and upper right Icon shows Rain as indication of real weather (also here in reality) but after load of flight - no rain and sunny with few clouds! This is same bug as before! Icon shows correct real weather state but in sim no same!

But pay attention to that Real weather Icon upper right at World menu where Departure and Arrival airports you can set. After set your departure airport (like me) that real weather Icon show to me correct expected weather but in sim not same, maybe postponed???

I was explicitly looking for an airport with currently bad weather. Right now, I’m going with a Caravan from Aberdeen to Edinburgh. The ATIS weather I get from Edinburgh is more or less accurate with the METAR I got from allmetsat. However, it seems like only the airport is overlaid by clouds, everything around it is… Charlie weather. 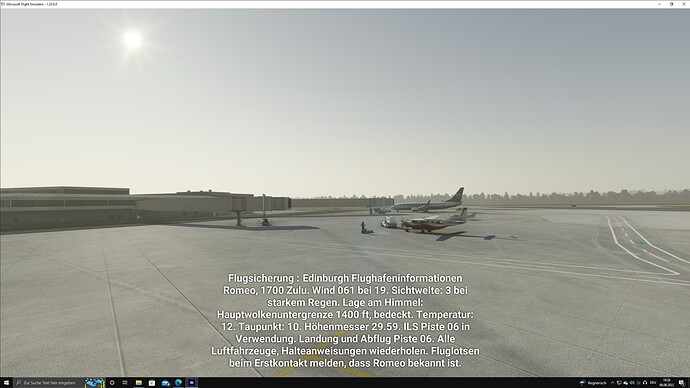 Edit 2: Fired up a weather app and searching for rain anywhere in the world.
Expectation: Rain in North Little Rock 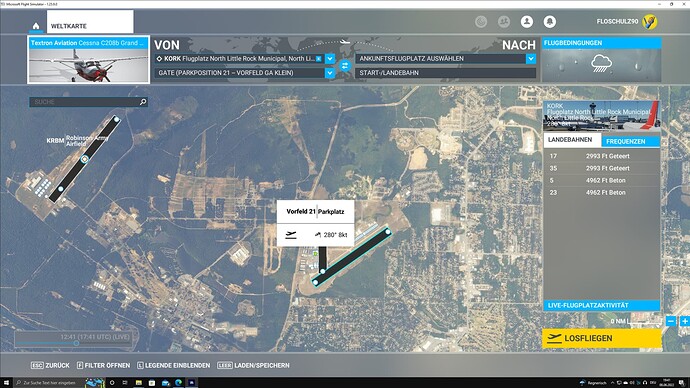 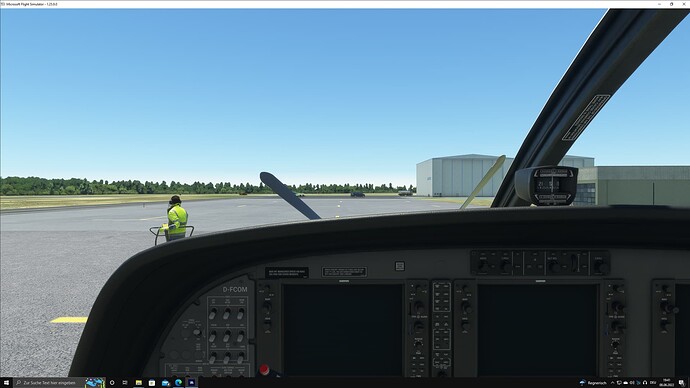 It’s really confusing i would say. The example above, where does the weather data we see in the sim comes from?