I think it’s a sphere, as elevation shows the same effect.

Need help!
Where ever I try to change terrain LOD in usercfg , it resets back to default settings without me changing? where as I edited and changed, saved
Any help

After you save the usercfg you need to right click the file go to properties and set it to Read Only. This should prevent the sim from overwriting the saved file when you launch the sim.

Yep, I am absolutely furious with the graphical downgrades. I saved up for a long time so I could build a top of the range PC for this sim. When I first got the sim I was blown away every flight, just stunning. I don’t get that any more, it is just not as good as it used to be, extremely disappointing to say the least.

I actually think these changes are potentially being made intentionally to support the new XBOX coming out.

I agree though, some LODs are terribly close. I run at 1080p and still get issues, can’t imagine playing in 2k or 4k on a big screen, let alone VR.

An example is flying past cliffs in central France, or near the unmodelled areas of the Dover cliffs in England. When you are only a hundred (or less) metres away they will morph and change in front of your eyes, completely ruining any immersion you may have gained. The same happens at further distances of 500m or so. Terrain settings all on maximum.

The trees and building draw distances have always been an issue since release, and steadily seems to get worse - the draw distance was much better early alpha I have to say. Mods that increased the tree draw distance have shown that having the ability to set it higher didn’t affect performance as much as you’d expect. The option at least should be there…

An example is flying past cliffs in central France, or near the unmodelled areas of the Dover cliffs in England. When you are only a hundred (or less) metres away they will morph and change in front of your eyes, completely ruining any immersion you may have gained. The same happens at further distances of 500m or so. Terrain settings all on maximum.

While it could be significantly related to the LOD distances, there is another thread that goes into more detail about this morphing issue. It could use some support!

Brief description of the issue: Doing flights over mountainous terrain, eg. between Innsbruck and Zurich, the mountains are continually popping and changing shape - others have described it as “morphing”. Never noticed this before the latest update (USA). This effect is very off putting as even if you try to ignore it, your eye is drawn to each one as it pops into a different shape. Here is a perfect example of the problem - look at the mountains changing shape as you get closer. H…

for the huge effort and detailed notes!
Lots of votes,

the devs move this to the top of their list!

This does not make any sense.

This does not make any sense.

Call it rambling on

Based on the OP’s findings,

Here are the OP findings:

I believe there is a bug in the FS2020 code using the Terrain LOD % slider not as a percentage, but as a square root of the percentage which is unexpected.

In other words if this is true, you’ll get an effective 200% LOD in solving this:

Wolfram|Alpha brings expert-level knowledge and capabilities to the broadest possible range of people—spanning all professions and education levels. 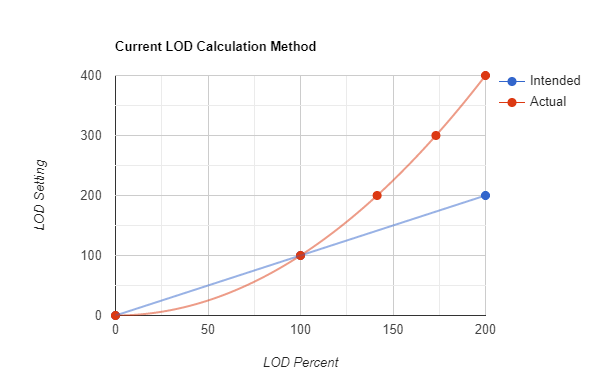 The LOD slider is related to the size of area rendered. Double the LOD is double the area. Thus double LOD is twice as much work for the game engine.

However since X times X is twice as much, X itself is only sqrt(2) times as much. Thus to double the draw distance you need to increase the area by 4, area size is what the LOD slider controls.

On the positive side, to half the workload, half the area rendered, only reduces draw distance to 71% of what you had before.

Body seems unclear, is it a complete sentence? Yes

Its easy to get confused… much like how I did a linear trendline based on the numbers but did not factor square root which is what the OP’s findings are based around and therefore not a linear line.

Again, I am doing this out of curiosity of the line it creates to visually determine what the actual percentages are of each LOD setting and the ones between because I find this whole thing very interesting.

If draw distance is 100 at the equator, it’s only 34 at 70 degrees North or South.
(and 0 at the poles, however there is nothing from 85 degrees up, no terrain, no water, nothing)

This is LOD 10 at the equator (Pontianak, Indonesia) 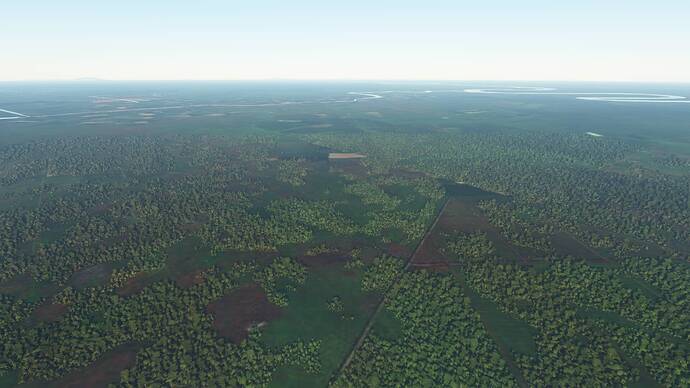 thank you for this graph! that explains a lot!
So if we had to revert back to 200 ingame setting now we need to set the Terrain LOD in cfg to 4.0! Oh boy…

Is this how it’s going to be from now on?

Increasing that alone already has a big hit on performance as you are asking your CPU,RAM then your GPU to do twice as much work. Maybe one of the reasons it s like that as I am quite certain the majority running this sim their rigs are probably struggling with that setting.
As DX12 roles in we may possibly have a preset higher than Ultra Lets see what Asobo does.
Personally prefer to see further performance improvements before tackling the LOD setting.