To moderators: this is a factual description of what appears to be a bug and this shouldn’t be merged with other “LOD” discussions otherwise this valuable information for the developers might be lost in the noise.

This is my next installment about the LOD problems in the simulator which I’m trying to rationalize in order to both help Asobo finding the root causes faster, if any, as well as to avoid judgements based on perception alone.

First let me try to explain what it is about: the simulator is dividing the aircraft surroundings in concentric circles and the farther away from the center, the less resolution and objects are drawing. This is a normal optimization. However if the rings are too close to the aircraft, the visual appearance gets degraded, because the rendered object or texture doesn’t match the optimal size/resolution it could display at. The possible visual defects could be:

Usually the distance between a ring and the next is double the distance of the previous one (exponential), which makes sense I guess because of Pythagoras:

In this post, I’m trying to measure what are the various LOD ring distance in order to find whether they could be too small and tightly packed, therefore causing visuals degradations too close to the aircraft. And I think I’ve found a problem with the LOD ring distance calculation.

First let’s start with the screenshots. There are 2 series of screenshots measuring from drone view the distance to the ground until the texture changes to the lower LOD. 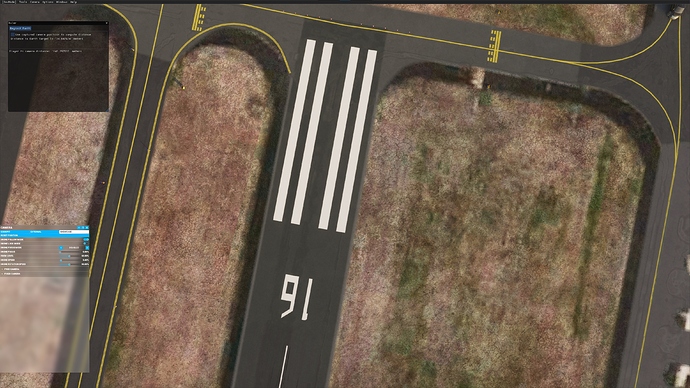 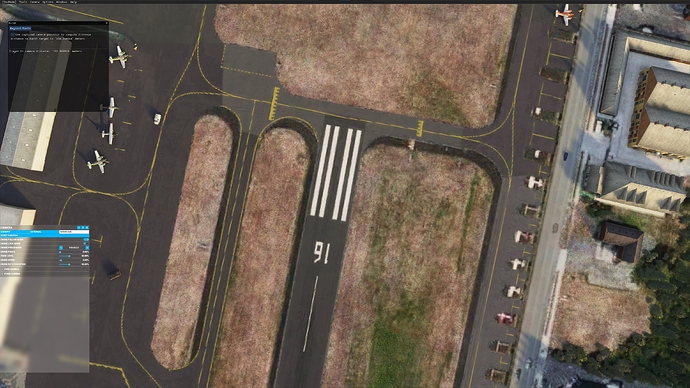 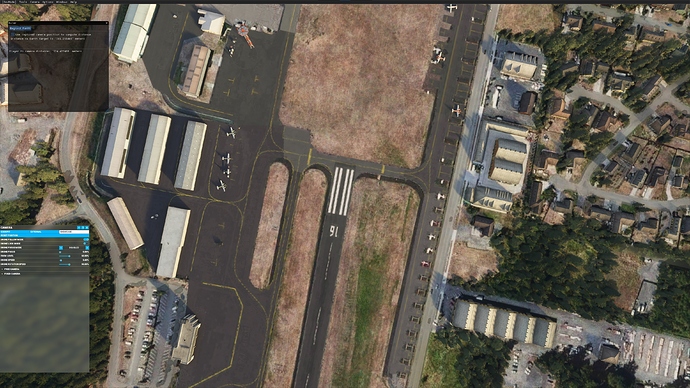 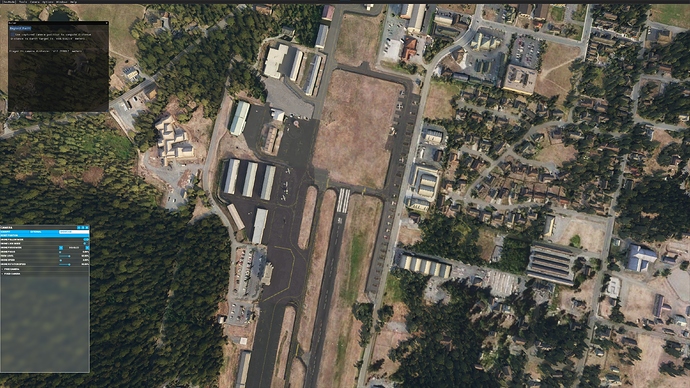 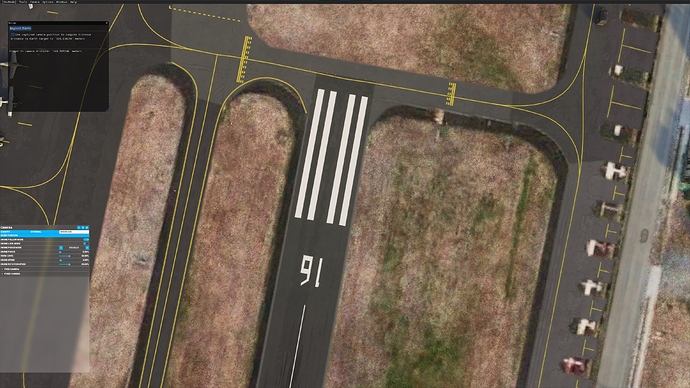 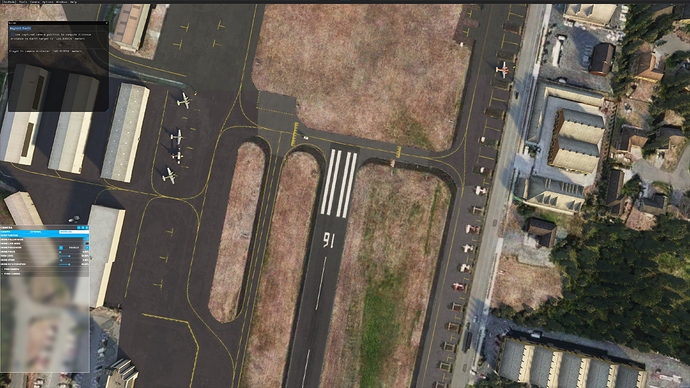 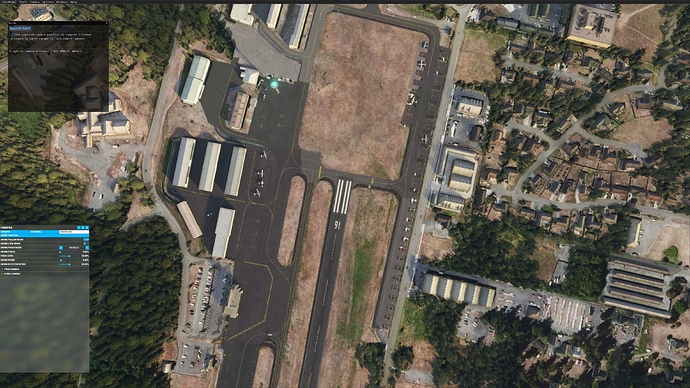 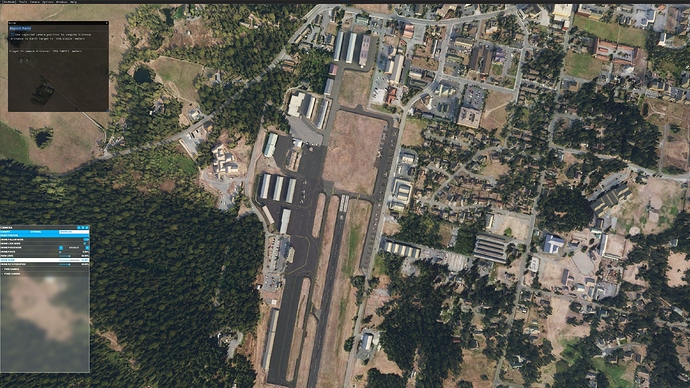 On one hand, FS2020 is using the exponential LOD distances like I’ve explained above, this is ok.

However on the other hand, FS2020 is using LOD distances which are not reflecting the Terrain LOD multiplier, and I believe there is an error there: when using Terrain LOD 200% I’d expect LOD0 distance to be 150m, LOD1 300m, LOD2 600m etc… effectively doubling the distance from Terrain LOD 100%.

Now if you look closely to the number and make abstraction for imprecise measurement given the tooling, you find out:

If this is a programming error, this could explain:

In addition, I believe even at Terrain LOD 100% the distances rings are too close to the aircraft and are reducing the rendering quality very fast a few meters away.

I’d recommend instead using the current (Terrain LOD 100% x 2) as the actual LOD 100% at a minimum. This would give more pleasant details immediately while also supporting zooming in a little without degradations. It won’t introduce any rendering performance problems either because users can still lower the LOD settings with the slider in order to make it the same as it is today (in this case we’ll use 50%).

If the chosen LOD ring distances are a chosen to accommodate the XBox version because the XBox hardware is measured as less performant than most PC simmers are using, then I’d suggest you use 2 different set of values: one for XBox and a different one for PC. If however XBox is proving in your test being superior to most PC simmers are using, then it won’t change anything because we can still reduce the slider if needed (but we can’t raise it past 200%… which really is 141% today)

I’m filling a Zendesk in the meantime and I hope this will be of any help!

[update] filled as: Request #70848 Terrain LOD distance is using the square root of its value.

[update2] for those wondering why Asobo is taking so much time with bug fixes, you have to realize they are receiving a lot of Zendesk and this takes time just triaging. In looking at my last 2 reports (68719 Oct 16 14:32 and 70848 Oct 25 14:15) you can deduce they have received 2129 request during this time. If they were treating all of them over the 5 working days in this time span, there are about 426 request per day to read, analyse, answer or dispatch!! If they’re working 8h a day, this is nearly 1 request per minute… This should put some of these numbers in perspective.

I’ve posted a new series of screenshots showing further showcasing how LOD distance might be wrongly computed with a 1.41 factor (square root of 2)

Very nice job! You did a very serious analysis. Congratulations! I hope the developer makes the fixes!

Great work. I really hope this is just a bug that get’s fixed & not Asobo deliberately downgrading the game either for the people that were having performance issues or to bring it closer to Xbox capabilities.

Everyone that could & can run the game at it’s original & better quality shouldn’t have it downgraded for the sake of people that couldn’t. Give people that can run it completely fine an option to.

You are absolutely right! That’s what I’m thinking. In my opinion, it intentionally degrades the quality of the developer. Unfortunately, it misleads users. Check out the videos of what the developer is doing to see how amazing the visuals are. A simulator issued to users is not like that. The developer has downgraded the sight several times since its release.

I think you are making an assumption that this is intentional based on zero facts and going against what the devs said directly in the Q&A, and this isn’t relevant to the OP’s post.

I think you are making an assumption that this is intentional

Nevertheless, assuming PR is not dictating what to say or not, therefore if during Q&A they were genuinely discovering there coud be a LOD problem, such bug could explain their surprise because it could have easily went unnoticed.

@CptLucky8 - apologies, my response was for FourHaddock2427 rather than you, and apologies if that wasn’t clear. Your analysis is excellent and well beyond my understanding of all things LOD! 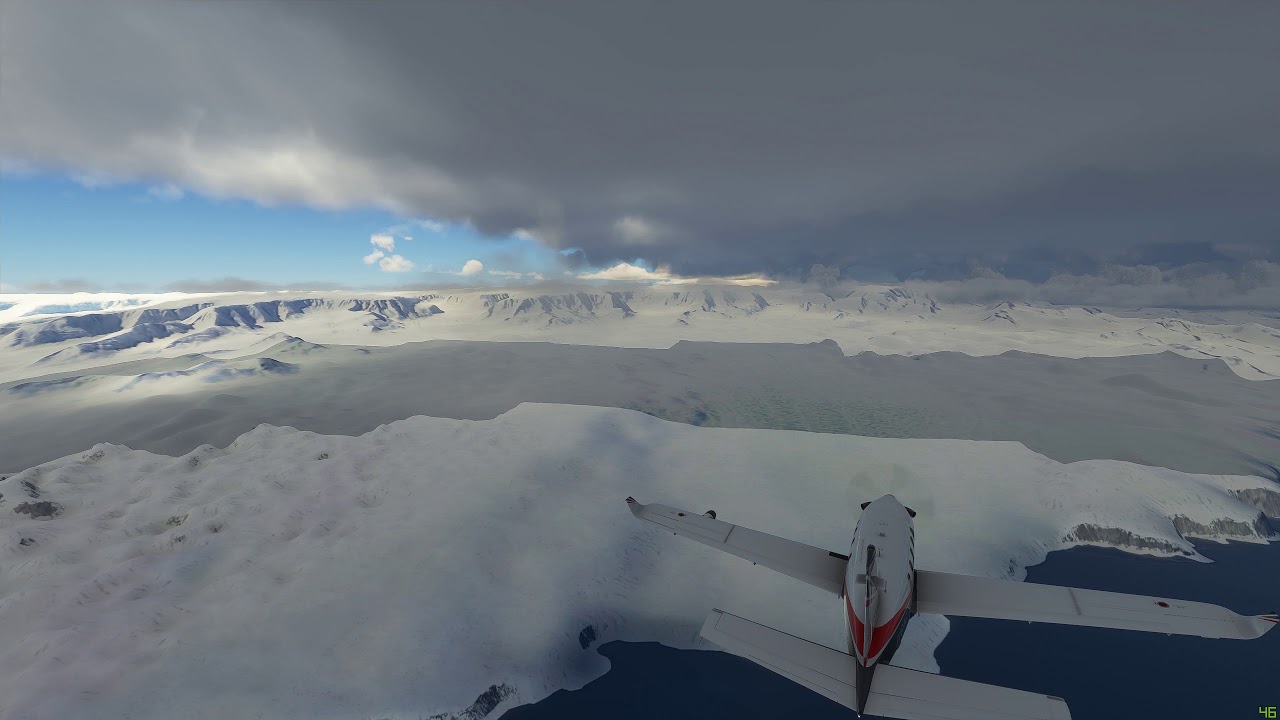 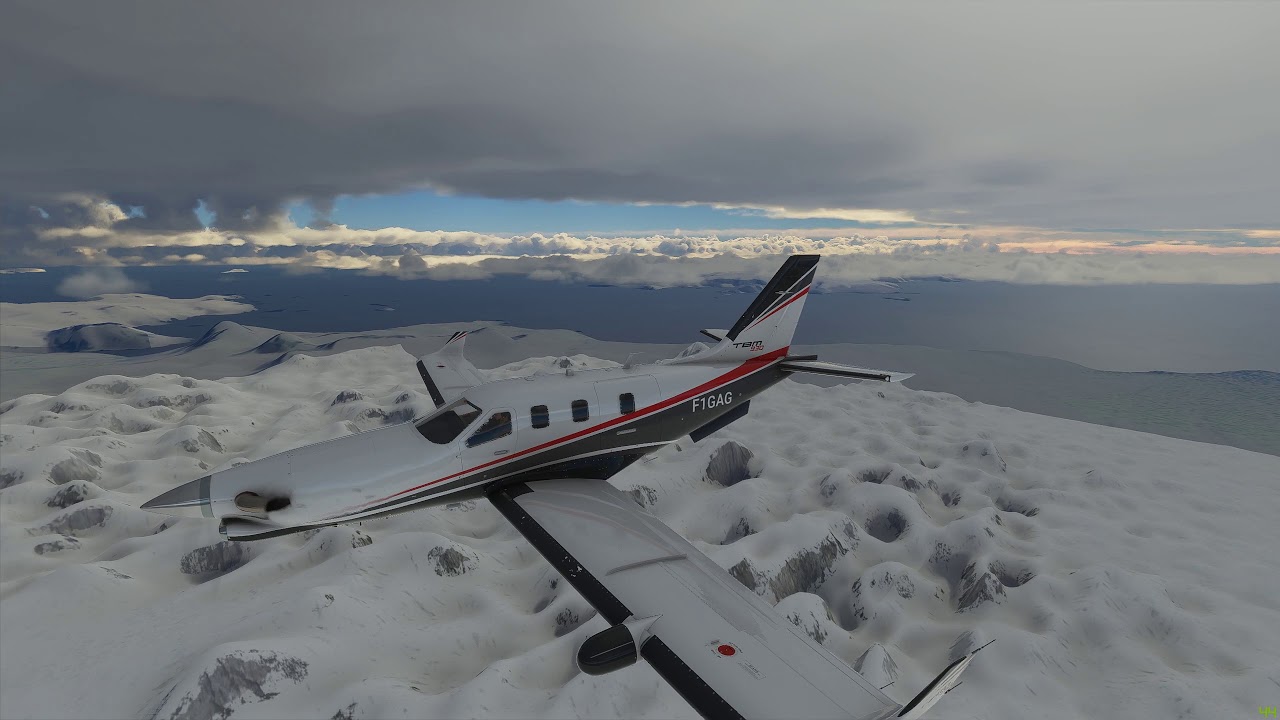 apologies, my response was for FourHaddock2427 rather than you, and apologies if that wasn’t clear.

It was clear to me, don’t worry. I’m just intervening before this becomes a mine is longer than yours kind of exchange!

Lol. Obviously I know who would win that!

Have you found a work around?

I find it strange that I can change building LOD in the user config file to 10.0 without any issues or crashes, however if I have terrain over 4.0 I get crashes when loading in.

Not sure if it’s related.

As for the square root issue, maybe that slider is meant to control the area of the inner LOD disc rather than the radius of the disc. I.e. 200% = twice the area with the highest LOD. Which would be counterintuitive compared to what we are used to, but would make some sense in that simulator load might scale more linearly with the LOD slide change. Also, if it is confusing to us I think you are right it could be confusing to different teams at Asobo as well and result in bugs.

Regardless of that, only being able to increase the radius to 141% is not enough, agree we need to either have the default (100%) LOD radius increased or a slider that goes way beyond 200% for those who want to go there.

This is a perfect illustration of the LOD rings in action!

Usually this could happen when images were shot at different period of time from different acquisition sources, and actually this in my opinion is a bug as well: they should only take the highest def LOD and automatically lower LOD textures only from this one (like mip-mapping) otherwise it introduces color and/or content differences.

Worth finding a few other places like this, documenting it with images and comparison like I did in this post in order to exhibit the problem, then posting a new bug report just for this in my opinion.

Thank you very much. Great job.

While ordinary user should not be requested to edit the sim config files and the wider range of LOD details setting should be allowed in the sim interface - is currently still possible to increase:

Thanks for your reply

I’ve posted a bug on zendesk with the videos and with the lat/long (Antartica). Another member had a similar experiebce in the Isle of Man, and has also posted a bug. I also noticed it a bit in Northern Canada although not as pronounced - I wonder if it much more visible in snowy areas. I will need to test this out, but is presumably, from what you say, a function of the bing data as well as the particular textures/colours.

In my opinion, they deliberately degraded the quality. I don’t have a chasing mania

Everyone can also see that with each update, the quality has further deteriorated.

The quality was degraded for two reasons:

This is not a matter of debate, it is a fact. Everyone can see what it was like.

It would be good if a developer would entrust the user with what settings and what visual world we want to use the simulator with.

To some degree there is not much point in reopening the debate as I’m unlikely to convince you. My experience is not this and I have carefully tested it.

Do you think this is normal?
https://youtu.be/sy1xHM4jdlQ

I highly doubt they deliberately degraded the visual quality. What developer would intentionally make their game look less good? (plus, they explicitly said they didn’t do so in the Q&A)

After all, there are lots of sliders and settings - from low to ultra - in order to allow for performance optimizations by the user. While it might make sense to tune the low, medium and maybe high settings a bit in order to fit current PC performance ranges, there is no real reason to tone down the “ultra” preset which is meant for best quality. The XBOX version will probably come with a custom setting set by the developer so it works best on the hardware - no need to tune down the PC visuals.

Plus, a lot of the performance enhancements came through CPU usage optimizations. That’s why people with a low number of CPU cores don’t experience as much stuttering as before. And some of the changes made to the visuals are clearly not related to performance, e.g. water waves. The patch notes state that the wave hight as a function of wind has been adapted. I don’t think this change really made an impact on performance.

As to the LOD, I think there are two things coming together: firstly, there might really be some new bug introduced in the last patches. Secondly, there is a lot of psychology involved. After flying in an area for a while, I personally find myself finding more and more little detailes that are a bit off. They have most probably been off right from launch, I just never noticed because I first saw the big picture. Coupled with the expectation of overall improvements after a patch, this quickly leads to disappointment.

Hence, I think it’s really important that we try to remind ourselves to keep this discussion on an objective and constructive level. The devs aren’t trying to screw us, they’re just really hard at work and - as we’ve all seem - make (human) mistakes.

Not at all…but this is also not something I have ever seen in the sim.