I happen to agree with this theory, it coincides with my thinking as well. Asbo has overreacted to the tree size debate and created the issues we see now with the reduced number and size of trees. It may be that the number of trees has not been reduced that much but their size definitely has, the result is what we are seeing now. The magic is definitely gone.

We need to raise our concerns with the ZenDesk and in the Bugs and Issues area in the hope that our concerns get heard.

It’s been done countless amount of times since release date and before that, as we now knows, by alpha testers. It’s too easy to ignore from whoever is in charge of this massacre to push whatever odd agenda if it doesn’t go past a bunch of forums and the company’s own support.

I’m going to use an exaggerated metaphor here, but if you’re hoping the sun to rise in the west and set in the east after seeing it do the contrary every day for a couple of months, chances are it’s gonna act the same the next month over and over again.

It’s not only to the forum and to zendesk we need to raise our concerns, it’s to social medias and the gaming journalists so we can have an impact on the market, not only on the forum.

BTW, it’s not just trees, it’s the LOD of buildings, the textures, everything is looking blurrier with each patch. It may not be that blatant for people playing at 2K or 4K but at 1080p, it is definitely.

Sometimes now, the view in the (not so) distance starts to look more and more like a crude oil painting than anything else! lol

Yeah, I loved the immersion. Perhaps we should mod the tree files and put the height and numbers back closer to the way they were in the beginning… if that’s possible. I definitely prefer the bigger trees and coverage to what we have now.

I’ve tried reaching out to IGN to reconsider their review due to all the issues the sim has had since launch. They ignored me. Money is more powerful than the truth so good luck trying to get any of the gaming media to pay attention and speak out.

Let’s try to recap and please feel free to correct me.
A few posts above is mentioning there are 2 different but related problems.

Synthetic buildings and vegetation made from a collection of generic 3D objects.

Below a certain distance to the outermost ring, objects used to fade-in, now they seem to pop-up instead. This is mitigated because they are displaying over their footprint picture found in the aerial ground texture displaying underneath.

Realistic buildings and vegetation made from textured mesh based on aerial photography of the real objects.

Below a certain distance to the outermost ring, textured mesh is popping in over the flat aerial ground texture. The LOD rings are smaller than pre-release therefore the lowest detailed mesh LOD is displaying too close. It is often referred to as “melted buildings”.

The LOD rings are smaller than pre-release therefore the lowest texture resolution is displaying too close. It is often referred to as “blurry ground texture seen at altitude” and wrongly attributed to network bandwidth.

The LOD distances (v1.8.3 and v1.9.3) are trading off distance for performance but they are adjusted to render objects at 1:1 zoom view in 4K (both photogrammetry and ground textures). At this zoom level and in 4K, photogrammetry mesh and ground textures are displaying just the right amount of details to fill enough pixels on the screen for their respective projected surface size.

In short, the renderer is dropping some resolution and details which are imperceptible to the eye under a given viewing condition (zoom 1:1, distance to objects). It is similar to JPEG compression which is displaying similar picture quality to the original at 1:1, but it is showing compression artefacts when zooming in.

The LOD ring sizes have been reduced since pre-release and this is affecting mostly photogrammetry and ground texture. Photogrammetry and textures were popping in with previous versions but it was less noticeable because it was happening farther away.

I know this is a a long shot, but I just noticed this latest patch had turned “OFF” Bing Data World Graphics. Having switched it back to “ON”, it has improved the scenery somewhat.

I appreciate that this won’t be the same case for all those suffering LOD problems, so please don’t hate on me if yours is already on or doesn’t improve things. 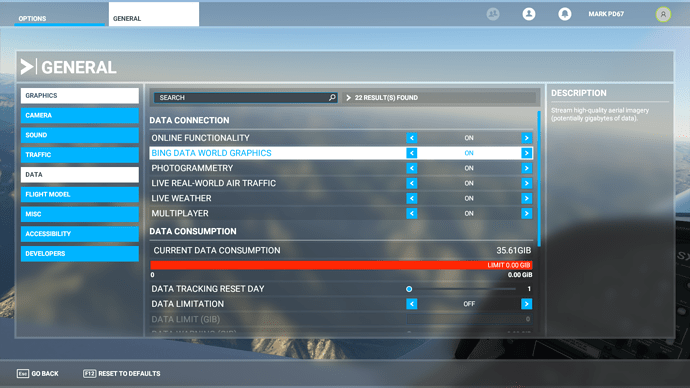 I’ve tried reaching out to IGN to reconsider their review due to all the issues the sim has had since launch. They ignored me. Money is more powerful than the truth so good luck trying to get any of the gaming media to pay attention and speak out.

I agree. We won’t easily get anything out of the major league players in that department, we all know they’re sold out to the industry one way or another, it’s been demonstrated countless amount of time. I’m more thinking on not so big but numerous youtube/twitter influencers, or us spamming shocking before/after screens on MSFS twitter (that can hurt A LOT) and everywhere where the hype is generated, but if there’s only like tens of us and all the rest sits there simply complaining in the wind, then yeah, it’s not gonna work lol. 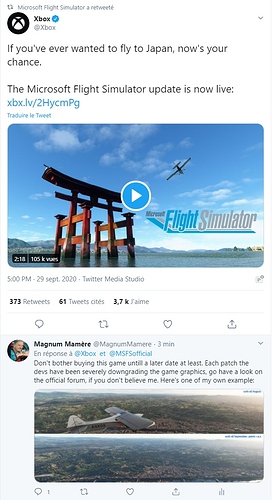 And reviewers won’t change their reviews for the moment anyway, it’s too early, they’d rather wait and see which is normal. However, they can relay a you-know-what-storm if that starts to happen because they won’t involve themselves directly by doing that.

And were you in the alpha test of this sim, to even know what was possible only 3 months ago in this very sim?

The alpha was run with far fewer simultaneous users than now are connected to the server at any given time. Part of the “stress testing” phase of the alpha was undoubtedly for Asobo to determine how high individual clients’ graphics could be set without negatively impacting the data flow for all users connected to the system. I’m sure that Microsoft is continually looking for ways to load balance and optimize the servers to deliver the maximum data flow to each end-user, and that process is undoubtedly ongoing, but there may be limits.

The NDA notice that every alpha tester had to acknowledge on each launch of the sim made it very clear that there were no guarantees.

They’re definitely downgrading graphics on each update… Downgrading the game after release is just not fair!. It’s never a good thing but I get it if there are changes (for worse) when compared to the alpha, since alpha is still under development. But when you buy the software upon release, enjoy the graphics and later you’re forced to “update” it to worse and worse versions… I really hope those are accidents and bugs… Because if they’re compulsorily decreasing graphics quality for whatever reason (lazy optimization or xbox matching) That’s a really dirty move.

While I respect your worthy opinion…

I don’t agree at all. The second pic is way too sparse. When I get closer or right over the land the trees all appear and it looks great. However from a distance it looks too naked especially since I’ve seen it look so much better before.

I just loved the fullness from the distance the alpha gave us! It was the second thing I noticed after the Clouds when I first loaded the game up during Alpha Testing. It was so incredible seeing so much detail so far out and it was running soooooooo goooood!

Anyway IMO, best case scenario would be to give us another Graphical Slider so that we can adjust it to our taste.

I’d even be happy if a 3rd party dev came up with a solution. I want those extended vistas back!

I don’t think this pic is bing data… looks like offline landclass, which in general doesn’t look good at all. I don’t find the “lod” a problem with the latest patch but the trees have definitely been thinned out, maybe a bit too much. I think they have done this for performance improvements. I run with 200 terrain and objects since the patch with great smooth FPS. I don’t find it worse at all, it’s actually bettter on ultra settings. i7 10700K 2080S 32GB

Keep this thread up

I just edited the config file to increase the terrain LOD from 2 to 5 and it seems to have improved things for me. 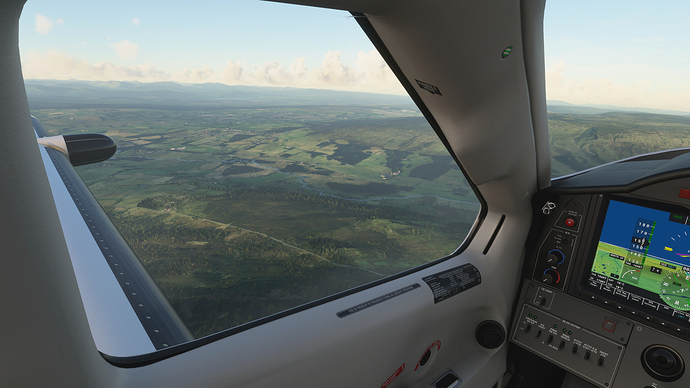 I’ll tell you what the problem probably is now.

The A team has already moved on, to crunch down and get the console version finished.

The PC improvements are probably in the hands of a less experienced team now, that received a one hour “knowledge transfer” session, and is terrified of touching it.

Is there no way to mod the LOD of the trees? We can change the Building and Terrain LOD in the UserCfg.