I spent a few hours this afternoon with some areas where I had screenshots low and med alt. Btw i’ve been at this since the sublogic days also. Here’s what i’ve noticed post patch.

All my screenshots before and after look the same ground texture, density buildings trees and vector. Higher may be a bit more blurry it’s subjective I dont have any screenshots.

What is clear is some folks have a huge difference posyt patch and for people that had to re-install i’m wondering if some of the sliders arn’t working correctly then people may not be able to get back what they had before.

I have an Ultra pic of an area of Edinburgh before and after and although I struggled to get the ac in the same location to take the shot, they look the same .

Water / water shaders seem worse, not so much in 4k but for sure in 2k.

What I did spend an hour on was bringing my nvidia colour settings panel up and tuning my brightness (blacks) contrast (whites) gamma and vibrnce to tune in a better in game view that works across night dawn day dusk (with the sim paused).

hth maybe we’ll get more word from Asobo about this and the other matters.

I would also say out of all the new sims we’ve had over the years there’s been nothing for me that looks and performs like this. To get so far so early in 6-12 months a lot of this will be tuned.

It is amusing that there’s another whole thread that claims the original version had too many trees and they were too big. Someone even created an app to reduce the size, and some people still complained about the density.
Just can’t win.

this is not about density, but about drawing distances (which also reduces density but not density in terms of trees that shouldn’t be there).

Some people are complaining about trees not being where they were even at close range I believe. I understand the lod problem but both issues are being conflated here.

This is only amusing if you are unable to differentiate density, tree size and draw distance…

…and the inappropriate positions of some trees such as concrete harbour walls.

. Wanting the console to look just as good as the pc version

hm, let me get this straight.

you assume that microsoft reduces the upstream bandwith just to please the x box community knowingly they will angry us pc users ? reduced quality means that less data has to be transmitted. there’s no other reason for doing something like that.

that makes no sense at all and i beg to differ.

The realism is just not there anymore. It does look worse now.

I wonder if a lot of these issues can be fixed by uninstalling and reinstalling the whole sim?

I’m not seeing a real change in quality. Over heavily forested and populated areas, the trees and buildings are popping up a little later, but that’s it. Perhaps I forgot how much better it looked at first!

It is amusing that there’s another whole thread that claims the original version had too many trees and they were too big. Someone even created an app to reduce the size, and some people still complained about the density.
Just can’t win.

I think these issues may be interrelated. The trees definitely were too big and visually too many in the early days of development.

I wonder if what has happened is that having reduced the size of the trees to something more realistic, there is now a need to draw many more trees to get the same horizontal coverage, and whether the increased draw count is a strain on the graphics engine compared with just filling all the gap with large trees.

We are not allowed to show Alpha/beta images here to illustrate my point, which is a shame as it is rather obvious once you have seen the difference.

I used to enjoy hedge-hopping around the countryside in the X-cub. But now it is somewhat unfullfilling compared with previous versions of the sim. Flying VFR I find that it is often hard to spot a grass strip airfield now from a distance, as you expect rows of trees to define the area, and they just aren’t there any more.

I’ve suggested all these things to Zendesk.

Netflix has hundreds of millions of paid subscribers

167 Million paying subscribers is not “hundreds”.

It doesn’t matter anyway. The Azure cloud that drives the streaming of MSFS is not going to get stressed out by 250.000 people using the sim simultanously.

Don’t get me wrong I miss the less lush appearance, but its difficult to discover the exact cause.

The quality gap between MS’s promo videos and the reality for (what I suspect is) the vast majority is certainly questionable, at the very least. MS can’t be singled-out for this kind of things, though - if you’re at all familiar with the concept of ‘bullshots’ you’ll know the practice is rife across the games industry.

In 3 years time, MSFS will look probably look like those promo videos on most people’s average gaming PCs. It’s just how this industry has always worked. Slippery? Sure. Welcome to PC gaming (and get your wallet out, 'cos you’re gonna need it).

Just about to land at Honolulu and I cannot recall the draw distance of buildings looking this pre patch.This is on Ultra btw 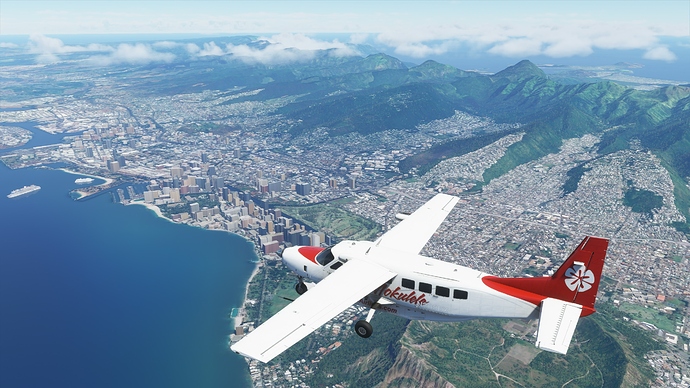 So did Asobo acknowledge any of the downgrades or broken bushflights at all since the update?
The lack of communication starts to annoy me more than the actual bugs.

Yes… you see the light. No, Asobo has given hilariously little information about anything they are planning to do, planning to fix, or otherwise planning. Go look at their development roadmap in the 17 September announcement post - it is extremely detailed.

Dear Moderators, please move this thread to Bugs and Issues, its named correctly now. I hope i wont have to copy paste 610 posts. Thank you

Dear Moderators, please move this thread to Bugs and Issues, its named correctly now. I hope i wont have to copy paste 610 posts if you dont

Actually, this sub-forum is appropriate since you have no way of knowing whether this is a bug or issue (problem), or intended behavior. Obviously, something working correctly and as designed can’t go in the bugs forum.

If you’d prefer to take a different definitional approach to the word “issues” in that you may have “issues” - then probably all threads in this forum should go in the Issues forum.