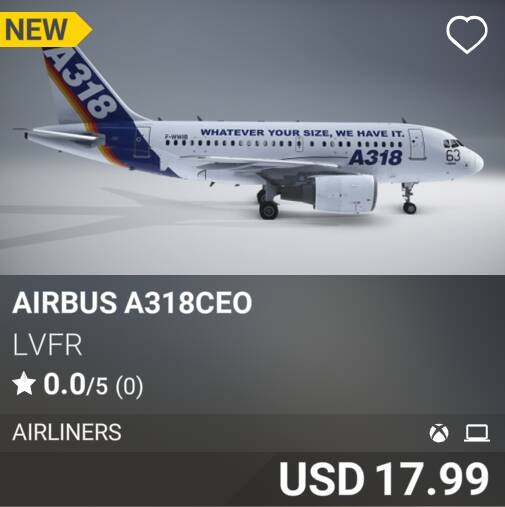 Lots of liveries too!

Nah more junk, just the default A320 in a different wrapping. In the same week a corvette is on there, this stuff is getting ridiculous now.

Had a couple short flights in it, I like it. Love the TWA retro livery. Looking forward to running this from London City to JFK.

Only thing I’ve noticed is the CG is way off, so adjust that and you’re golden.

can confirm. if you don’t adjust that center of gravity, she’ll never climb past 30K. very bad oversight and needs to be patched for people who will forget.

Does it have the steep approach capability for airports like EGLC?

On Xbox series x I’m getting a lot of screens going to black and is anybody else had similar issues?

The problem is not the center of gravity. The issue lies on the fact that the plane is loaded with full payload and 50% fuel. The amount of fuel we can’t change, but only the user.

We will try to see how we can improve this on an update.

Looking forward to running this from London City to JFK

Ambitious. Tell us whether you made it.

I’m confident in mine and the planes abilities. Refuel stop in Shannon, and the weight of only 32 pax… should be easy and fun.

I’m sure you guys will get it. the 319 and 321, for all the disparaging they get for using the default 320 cockpit, really fly pretty good. I’m always doing group flights with them. Wish they all had VNAV descent but other than that, they fly pretty good. tweak the 318 a bit and I’m sure it’ll be fine.

I use to love LVFR and their sceneries, but I’m really beginning to sour over seeing them dump these cash grabs. Another good company taking the easy road to make a buck. @Richie81 Please go back to focusing on your sceneries. There are still several LVFR products with serious terrain issues that need attention. Stick to what you guys do best! SCENERY

Refuel stop in Shannon, and the weight of only 32 pax… should be easy and fun.

Don’t buy it then?

I bought it and I’m happy with it. It’s got a custom flight model, sounds, animations and a full interior.

I don’t understand why that is so offensive.

Don’t worry, I didn’t buy it. Voted with my wallet. Just because you’re satisfied doesn’t mean others have to be and it also doesn’t mean we can’t voice our concerns. If you’re interested to know why many in the community don’t like it, do some research across avsim, these forums, and others to find why folks are unhappy with the aircraft they put out. You’ll find plenty.

Equally I shouldn’t be unhappy because other people are telling me to be. It’s fine and non compulsory.

I think doing my research by actually testing the product myself rather than relying on the criticisms from people that are bent out of shape despite not even having bought it, or have no interest in buying it is a better approach for me.

You do you my friend. You’re entitled to your opinion as I am mine. I’ve done my research and vetted the product through the reviews of reputable folks. If paying money for a shell of a plane with no real depth is what keeps you going in this hobby, then have a blast! I personally will be waiting for the serious products to come out. As I originally stated, I just hope LVFR sticks to what they do best, which is scenery.

I’ll also add, I’m not calling LVFR out for duping the community. They were very clear about the limitations of this plane and the audience it was intended for (casual Xbox players). With that said, it doesn’t change my mind that they do a great job of scenery, not aircraft.