Since SimUpdate V, the fuel selector of my M20R (Carenado) is inoperative.

Anyone else with this issue?

Need to wait for an update of the M20R. 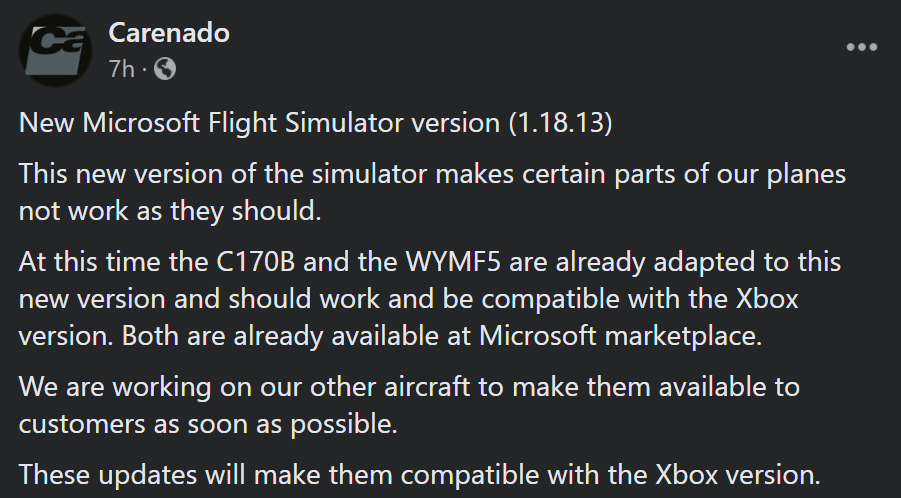 Wow I just bought this module and was wondering why I couldn’t do that. Is this also why I can’t cold start the bloody thing? Ctrl E works but turning the magneto switch it just won’t start.

Yes that’s correct. I think there will be an update soon because this aircraft is in the Store of MSFS.
The M20R is a very good add-on, I have done hours of flight with it

All their planes are messed up with the exceptions being the ones in the screenshot I posted. They have to fix and submit to Microsobo. And then the wait starts. How many weeks until Microsobo publishes them to the marketplace? Nobody knows.

I literally just finished getting past CTD’s and now I’m facing this. This isn’t functional on any other Carenado planes I own. CRJ APU is also non-functional. FBW is borked. Did Asobo set out to make this game unplayable with the new update? Because thats what they’ve accomplished.

Fuel selector not working for me.

Speed brakes, the sound plays but no animation on the wing, they do still work in slowing the plane for me though.

Fuel selector levers - It’s not working in the Beechcraft G58 and other GA aircraft. They were working before.

Go to your content manager and ensure you have the updates to the Premium and Deluxe editions downloaded. I saw my updates show up a couple of days after SU5 launch. Since then, my fuel selectors have worked fine in all of the Microsoft planes. The only ones that don’t work for me are 3rd party planes.

I did some digging around on the MobiFlight hubhop database to see if I could find a way to get the Mooney fuel knob to work. Tried all sorts of things and was able to see some variables changing in the dev mode model behavior viewer but…

No dice. Nothing I could find would change the state and allow the engine to start from cold and dark.

We will have to wait for a fix to be posted in the marketplace and/or the sim bug that caused the issue to be fixed.

Yeah, no SimConnect or SDK commands will do it. It’s stuck. The only way to currently start the plane is wth Ctrl+E. Once it’s started, there’s no way to switch fuel tanks, so your plane will quickly become unblanced if you’re not doing just a short flight. The only way around that is to refuel it in flight with the command or weights & balances window. Not realistic by any means, but at least it means you can fly the plane.

I’m actually flying it right now as I type this.

Crunchmeister71 - I thought if the sim had any updates it would indicate so with the Notification bell at the top right side, it didn’t show until today. When I tried to use the Content Manager it didn’t show any updates. I installed the updates for the Premium and the Deluxe editions and the fuel selector levers work now. Thanks.

Yeah. On the day of SU5, I got all the available updates in the Content Manager. Checked and double checked. It wasn’t until a couple of days later that the notification came up that there were updates. Went into the content manager, and there were updates for Premium and Deluxe packages. Downloaded those, and my Microsobo planes were all fixed. Outside of the horrible elevator trim, that is. lol

I think there are bigger problems with Microsobo’s online services than they’re admitting to and it’s causing havoc in all kinds of ways.

They also tend to fix one or two bugs but create several new ones.

Started with the very first update last year in September. And they haven’t failed to do that in any update since. Fix 3 things, break 5 other unrelated things that were fine before the update. It’s par for the course. I’d be shocked to see that pattern change.