Today’s sim update says the CTD issue is resolved, but it says nothing of the “painted area moving in different directions” bug. Has that been resolved too?

Would be unbelievable if they fixed the CTD issue but didn’t fix the part where you can’t actually cache anything manually because it zooms all over the place / slides inaccurately everywhere.

Edit: Nope. Unbelievable. ■■■■ still moves all around the screen… but hey it doesn’t CTD! WTF WAS THE POINT?

@OlieTsubasa443 Can you raise this issue with the devs?

If the painted area moves around, how can we tell which area is actually getting cached?
Not everyone has fiber available, and the Manual Cache did a good job of mitigating that.

They asked us to delete and redo the Manual cache for the London update, due to server side tweaks, except it now can only be done almost blind.

They have the incredible capability of destroying stuff that works while not fixing the stuff that doesn’t. Why they even messed with the manual cache UI - it was bad, but not as bad as some other parts of the sim. Now it’s unusable.

i have had the same issue for months where the map moves around the whole screen and your selection does not stay were its supposed to. I cant believe this still has not been fixed. they should just take it out if there not going to make it work.

I have a suggestion regarding the manual cache for the Asobo development team. I see very little attention being paid to it and rightfully so compared to some of the other issues you are tackling. Why not open up the code and structure to how that cache is arranged and how the data gets into it and let the external world create applications to manage it. One look at the amazing catalogue of freeware add-ons and utilities and how quickly they sprang up would give you the obvious answer to this. I’d bet it would be about a week or two before some very slick app appeared that allowed people to identify and save vast areas of manual cache with a very simplified and functional UI.

I can’t imagine any corporate secrets would be exposed in giving up this one woefully inadequate and non-functional area and would free up whatever team you have assigned to this for more important tasks.

Yeah, don’t think it’s time to close this yet…

The view shifting around is becoming incredibly annoying. I fly past the white cliffs (Dover) last night hoping to see their majesty, and knowing that I’d previously cached the area, while wrangling with the shifting view … The cliffs looked as they always used to, until I was probably 100m away, and then they popped into existence.

The manual cache not working correctly wouldn’t be such a big deal if that kind of pop-in never occurred in the first place. I go back into my cache to make sure I’d cached it, and depending on where and how zoomed out/in I am, I’ve either cached the cliffs (and it’s not working), or I’ve cached a huge section of sea in the channel. I include northern France in my view, I might even have cached a bunch of the Thames Estuary!

I only ever really fly in South East England (since that’s where I live, and am learning for my PPL) and just want to get rid of pop-ins and reduce load times. I have plenty of SSD space I’m willing to dedicate to it, I’d love to just be able to cache ALL of the south east on high quality and be done with, but even if this bug with the manual cache is fixed, that’s still basically impossible since you have to zoom in so far in order to get to the high quality zone.

People complain about the seriousness of other bugs and that this is low priority, but to be honest, I don’t see many of them … perhaps because I only ever fly GA, not airliners. And maybe I’m missing something, but with the quality of the scenery visuals in this sim it strikes me very much as better placed as a VFR tool, not being at 30k feet. Each to their own though - of course.

They have the incredible capability of destroying stuff that works while not fixing the stuff that doesn’t.

Thats the heart of the matter. And its so completely incomprehensible to me. I could well live with an explanation of the problem to understand its complexity, but not with this uncertainty of what will be screwed up next. It feels like those kind of politicians they are telling you that they don’t want to unsettle people with their knowledge

Dear Asobo/Microsoft: Please communicate more openly. Nobody will hold that against you and it prevents all the unnecessary speculations. Thank you.

If you move the view, the grid alignment changes, meaning it is impossible to even know what area you are supposedly (but not actually) caching. This applies to both selected and non selected areas.

Yes I deleted my Manual and rolling cache for the update as recommended. I then carefully recreated my local flying area in high which is a total pain to do and noticed it was slipping independent of the map below as you described so well.
Now it has moved …So I seem to have spent half an hour caching an area of the Irish Sea with nothing in it so exactly what is getting cached ?. Is this happening to everyone since the World update 4.

It’s been happening since around the USA update. They did a “manual cache server side fix” for the London update, telling users they should delete their manual cache, knowing full well users would not be able to accurately recreate it.

Houston we got a problem… Today i insert 10 gib in manual cache when i only have 6.44 gib… I see that only now. Any ideas? i cant close the sim and now is stuck here. I have alredy try to remove some mod in the communy folder to get more space, but nothing. 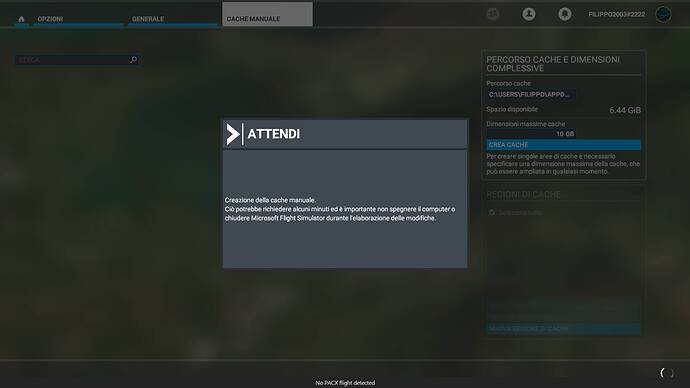 Thanks in advance,
Filippo

Such a simple thing, and they won’t fix it.

My recommendation to Asobo was to simply open up the manual cache to outside developers. Let the community create an easy to use the manual caching system. The only thing developers would need would be the data structure of the manual cache area. Why does that caching need to happen inside the sim with all the resources the sim requires loaded while working with it? It’s obviously a memory intensive operation that requires a zoom-able map. Creating a much easier to use system is not rocket science but I imagine it’s way down the priority list of the Asobo development team. This seems a no-brainer.

I’m pretty certain that when I first got the sim and created a manual cache the map view was top down - bird’s eye. It was easy to create a cached area, zoom in, and create another area in higher detail. But now the map view is from an angle - with perspective etc. - and when you scroll the map to zoom, the highlighted area moves. For example I can cache Hyde Park in high detail but when I zoom out the cached area has moved. Did MS/Asobo change this at some point? It’s really difficult to create an accurate manual cache now.