The snow is here (CYTS) and the colder weather is starting to set in. Much to cold to fly the 172 using live weather due to icing.

Looking for a (realistic) route that a 172 could do hoping from CYTS down to Florida (that’s where most Canadians go isn’t it?)

@Crunchmeister71 I may need your assistance as I know you do this as well! Any route ideas or a final airport destination to base out of (payware is fine if there’s a nice one).

Not sure I can help with a route. I just started flying out of KOPF when it got too cold here. I didn’t worry about getting myself there the realistic way. lol

Miami and San Diego are my winter bases.

Oh I get it, you installed American Truck Simulator, rented a flatbed and drove your plane down South

Going to plan a route down to Key West and fly out of there. Area looks nice and FSDreamTeam did a nice version of the airport.

Yeah, I have that airport. I fly in and out of KEYW quite often during the winter. I have a triangle in south Florida I like to fly from KEYW, KAPF (Naples - have a nice payware scenery for it) and KOPF. I also fly to the Bahamas. It’s an nice, scenic area for winter flight.

I bought the KEYW one I’ll check out Naples as well.

(Naples - have a nice payware scenery for it)

Who makes that one?

I can’t remember offhand. It was from the marketplace. 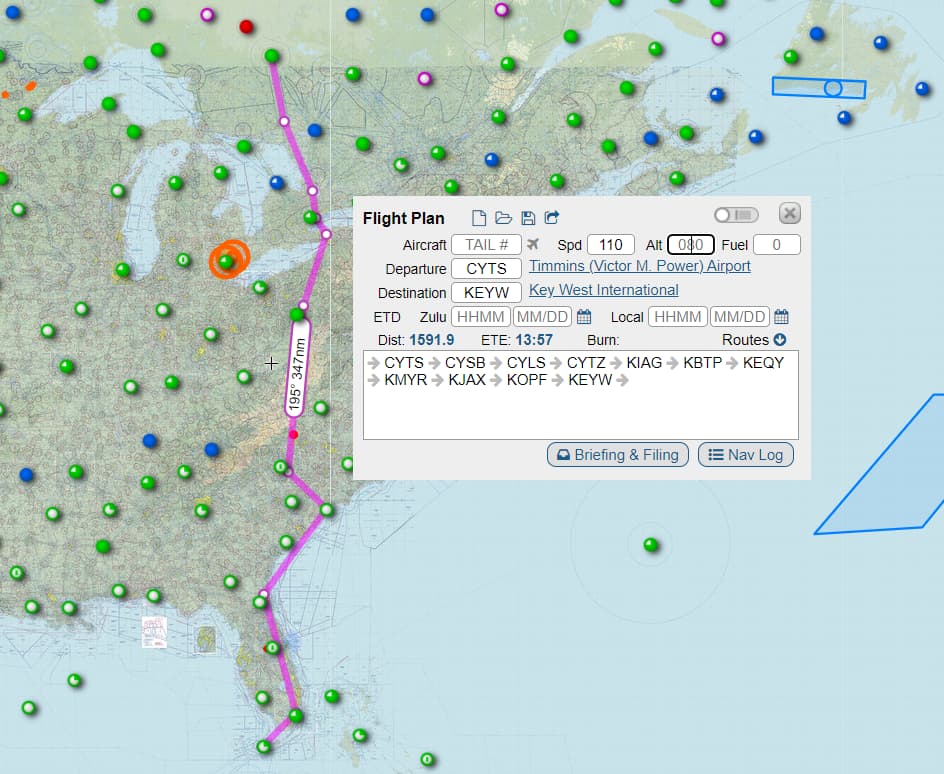 You will have an interesting time navigating the weather at this time of year. I am based (in sim and reality) in the vancouver area and make my way south in the sim at the end of Sept. Generally hang out in the Arizona and Socal area.

It will be interesting for sure. This is my first time (just started in the sim a few months back) so will know better for next winter

All part of the fun, navigating the weather. You will get there. It will be fun. I too only start where I end off… no cheating lol.

Completed the first leg this evening (CYTS → CYSB). It was cool (4C) with a low ceiling (800FT on departure).

Was a bit bumpy along the way and at one point on approach thought I was going to have to call a missed approach but then the runway finally came into view and I was able to set it down.

I will say, this was my first flight since adding AIG and it was nice to have the extra ATC chatter, see the other planes on my radar, etc… Added something extra.

Off to Toronto tomorro!

Made it to CYN3 last night and then flew out of there this afternoon to CYTZ. Was nice to see the Blue Mountains and then fly over Toronto on way to Billy Bishop.

Was the first time using full ATC all the way in which was neat. Using Pilot2ATC so that made it even better.

Also first time having other airplanes around (AIG).

Continuing on this afternoon.

Finished the night off in Pittsburgh.

Loaded the US Region ATC Chatter for P2ATC. Really fun having full coverage from start to finish, taxi instructions etc. Tons of aircraft in the sky.

P2ATC a little too chatty on “traffic at blah” but I think I can dial those settings back.

Flew over Niagara falls at night which was nice!

Has Snow started in Canada? Its a shame pilot2atc does no chat to A/I AIRCRAFT

Snow in N.Europe and the UK next weekend.

Thanks, I live SE England I might need to migrate

My base airport (CYTS) has lots! in real life and sim!

Yh just climb to FL100 and ride the strong tailwinds down south. Should get 140kt GS from the C172.

Its a shame pilot2atc does no chat to A/I AIRCRAFT

Yea, I mean it will tell me about the traffic, you just can’t hear the “chatter”.

That said, there’s other software you can use to fill that in which I do so I hear real ATC clips the entire flight. The clips also change depending on frequency. If you’re on approach freq you only hear appr chatter, etc…

It’s also broken up by region so you aren’t hearing say asia traffic while in Canada or US.