As the title of the post says: the moon is too big in VR

Yep voted, I think it’s been mentioned before but I guess many folks aren’t that bothered?

Hint, If you are then vote

Voted as well. It’s not the worst issue in VR but still.

EDIT: With the last update, I completely lost the Moon. So it’s not too big anymore.

I agree, it‘s not the most pressing subject (after all, MSFS is not a moon simulator

Did you also lose the moon or is it still present?

Since today the moon is completely gone! No trace left of it… I could not believe Asobo messed up my beloved sim like this!

I immediately got in touch with Zendesk. They assured me they are aware of the problem and will throw all their resources at it. But they said it will be quite a challenge to fix the moon in one go.

Apparently, they need to issue daily hotfixes. But they promised that in something like 15 days the moon will be restored to it‘s former glory! I hope, for good this time…

It’s like this since the update’s release for me, as I said above 4 days ago.
So weird they f**** up that much with this update

Zendesk assured me the full moon will be available again on Sunday, March 28!

Because it is a full moon day!

Well it won’t help since my Moon is completely gone

I should see a light crescent today, and nothing in the sky.

Well it won’t help since my Moon is completely gone

I agree, it’s minor, but I can’t help notice it.
Looks about 30% too big (in apparent diameter)?
It was maybe done this way so that the sun and moon are more noticeable in 2D.

I still don’t understand why my Moon disappeared.
I’ll try to reinstall everything.

To be precise, the moon and the stars are to big and also the stars are much to bright. Its explanined somewhere else in this forum why, something about mapping versus modelling. The actual implementation here (mapping) works good in 2D but is not good in VR as everything gets more and more inflated and blurred with the distance,

Are you on the Steam or Microsoft Store version? Store

Did you submit this to Zendesk? If so, what is your ticket #? No.

I don’t know how this is a bug fix saying that the moon is bigger using only a text description, and no evidence in form of screenshot and comparing screenshot between the picture in the sim and the real life picture.

You would think that when you report something that is inaccurate between the sim and real life, you would provide photographical evidence for both cases that we can use to compare it, validate it and if needed fix it. Otherwise it’s just your word.

The angular diameter of the sun and moon is about half a degree in your field of vision. If you know the resolution and field of view of your display you should be able to calculate how big that is in pixels and compare to a screenshot. (Keep in mind that things farther from the center of the view are more distorted, and will appear larger.)

It probably doesn’t help the fact that it was a Pink Supermoon yesterday. So the moon does appear larger because it’s currently orbits a little closer to the earth.

Then we do have atmospheric distortion that the lower the moon or the sun is and closer to the horizon, the amount of air in the atmosphere that the light has to go through, might magnify the apparent size of the object.

That’s why the moon and the sun appears larger on rise and set times compared to when they’re high up in the sky.

So the moon does appear larger because it’s currently orbits a little closer to the earth.

It’d be very simple for Asobo to verify as they probably know very well what size they picked for displaying the moon in MSFS. And for something that’s 3 times bigger than real life, I doubt you’d need “proof”, anyone could see it easily.

But if you still doubt the OP’s claim, jump between these two images and compare. Pretty close to 330% of the real angular diameter.: 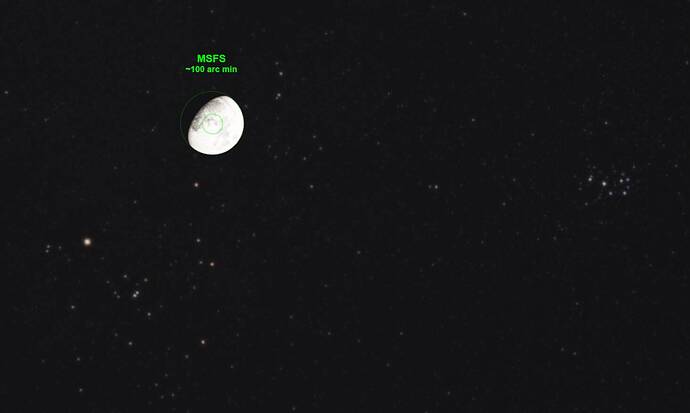 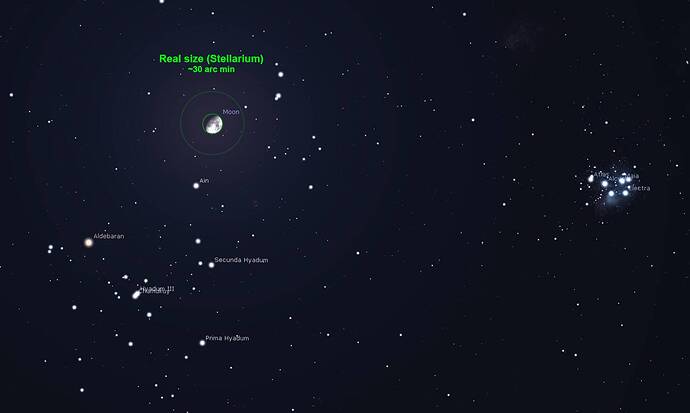 Probably to make it more “eye-pleasing” is my guess.

Just noticed that MSFS sky is one day off too, had to offset planetarium date with -1 day to match moon position wth sim. (Checked with 3 different software just to make sure.)

And for something that’s 3 times bigger than real life, I doubt you’d need “proof”, anyone could see it easily.

That is assuming people actually focus on the moon and think it’s a gamebreaking bug. I guess it just depends on how “important” this kind of accuracy is. I never really notice it unless someone points it out directly. So your screenshot does give me an understanding on how oversized the moon in MSFS is. I was thinking that it might be a zoom thing, but judging from the position of the stars in the background, which both images match. It does paint a better view on the difference. Something that I wouldn’t have realised since I just use the sim to fly A320 on IFR. As long as I can take off and landing without issues, I’m already happy.

But yea, having this evidence to compare the two images is good for the developers to have a look. Otherwise, if I didn’t realise it was oversized to begin with unless someone points them out with a comparison screenshot, there’s a good change the developers never realised it too.

As stated above, there is also the stars issue: planes and clouds are behind them. They’re way too close to us (might also be why they’re so blurry and low def).