After buying a Quest 2, I spent the last week banging my head against the wall trying to get what I considered acceptable performance in VR out of Microsoft Flight Simulator. Today I had somewhat of a breakthrough- I’ve got a clear picture, and a non juddery framerate.

I thought I’d post my setup here in case it is helpful for others. I’ve read literally hundreds of posts on here - thanks to all those who have contributed.

With the settings below, I get the above working perfectly- 27ms frame times, 36 FPS almost flatline, crispy instruments, decent scenery. Note however if I take the same setup to say Chicago, or fly an Airliner, I need to drop the game settings until I get 27ms again.

Note some of these are strictly voodoo- ie I haven’t tested on or off. There are so many combinations, and I just want to spend some time paying the game

Driver: 466.27 (latest)
Nvidia Control Panel Settings: (I don’t know if I need all of these or not- will test one by one when I get time.) 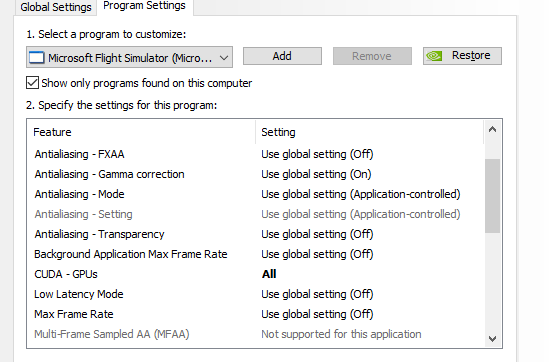 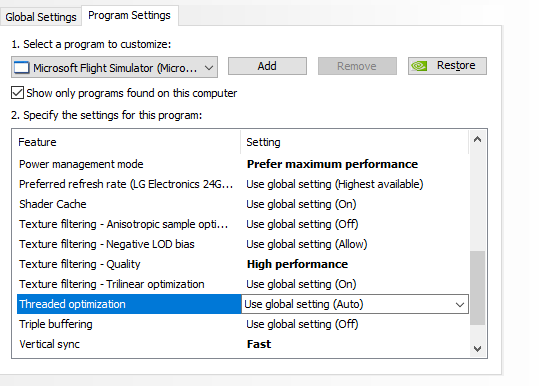 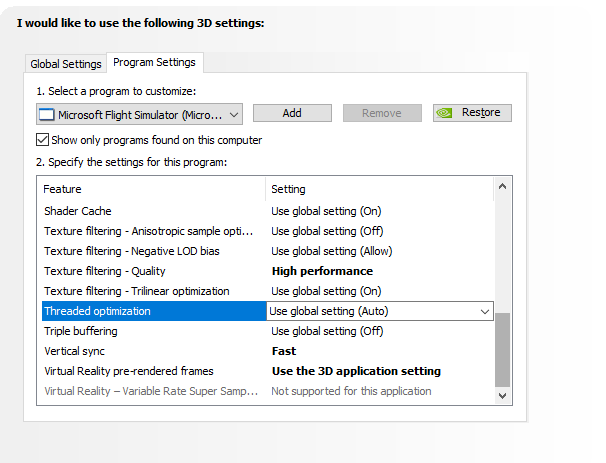 Tray tool
Whenever I connect the Quest to the PC, I need to reset the AWS and Supersampling settings below. This means I change them to something else, then, back to the settings below. The tray tool should do this for me but I can’t work out how to add the Xbox store version of Microsoft Flight Simulator as an executable.

In game
Main settings to play with, depending on your context. I find if my timings are out, I can drop one or all of the first three settings below and still have a decent picture.

These are the main contributors to frame timing. My other settings are as follows:

A note on startup order.

I don’t know if this is magic or not but this works for me:

When changing settings in sim:

When changing supersampling in tray tool:

When changing headset frequency or resolution:

If instability occurs (low frames when you know it was solid, unstable picture etc), restart PC

A note on timings.

You can inspect the CPU and GPU frame times in Microsoft Flight Simulator debug view, and see if you should consider moving the refresh rate in the oculus tool up or down.

The frame rates available to us can be expressed as follows:

The quest seems to “snap” to the next available stable FPS based on the frame time. So for instance if it is taking you 35ms to render a frame and you are running at 90 hz, the quest will run at 22.5 FPS. If you drop that frame time to 33ms you’ll start getting 30 FPS.

So if we are getting 35ms frame time, and can’t do anything to reduce that, we’re best running the quest at 80hz. The quest will the snap to 27 FPS, which is better than the 24 FPS we’d get at 90hz.

Check that Microsoft Flight Simulator and it’s cache are on a fast drive. I have two SSDs, a fast and a slow, and I saw significant disk queueing (sustained > 20) in windows perfmon on the slow drive. Moving the game to a faster drive fixed this. I used Crystal Disk Mark to measure actual drive speed.

I use the openxr runtime rather than steam as detailed on the zendesk site under “How to install OpenXR”. Seems more stable, and I don’t have to have steam running using up resources. Downside is I can’t run FPSVR to measure frame rate, and have to rely on the oculus tool;

The latest afterburner beta seems to include a c++ runtime that kills my Microsoft Flight Simulator install. If this is happening remove c++ installs as detailed on the zendesk site under “CTD Issues”

Make sure your page file is of a decent size

Make sure your USB port has enough power. I had frustrations at first with the quest or oculus software crashing, until I plugged the quest into a powered usb port on a powered usb hub (you need both of these things!).

Hope this helps someone.

This is very Helpful, thanks!

Thank you, it’s always helpful to have alternate settings to try. I can get it to run smooth but with completely different settings. FS2020 is so weird that way.

At the 72Hz setting in the Oculus setup app, what do you mean by max resolution? 1.3X? Just confirming. It seems way larger than the Quest 2 can deliver, so I am trying to understand how to interpret the various resolution settings. Quest 2 resolution per eye is 1832 x 1920 per eye. If I recall, you double the vertical, so with two lenses that comes out to 3664 x 1920, but I could be wrong. Anyway, 72Hz at max resolution is 5408 x 2736 – seems like overkill.

Have you tried it? It is certainly not overkill, I’ve been running 72hz and max render scale in oculus for a month now, will never look back. The clarity for cockpit screens is so much better, I’ll take every super-sample I can get!

@PRD925 it’s 1.3x on the slider. It is larger than the quest native resolution, however due to barrel distortion it is the magic number that gives a 1:1 app to display pixel ratio in the middle of the display- ie no super sampling.

Source: Volga Aksoy, who codes this stuff for oculus.

On my rig, I’m not going to hit 72 FPS even at potato quality (I’ve tried- turning down all setting to a blurry mess still gives 36 FPS max), so cranking this slider all the way up hasn’t really cost me anything. 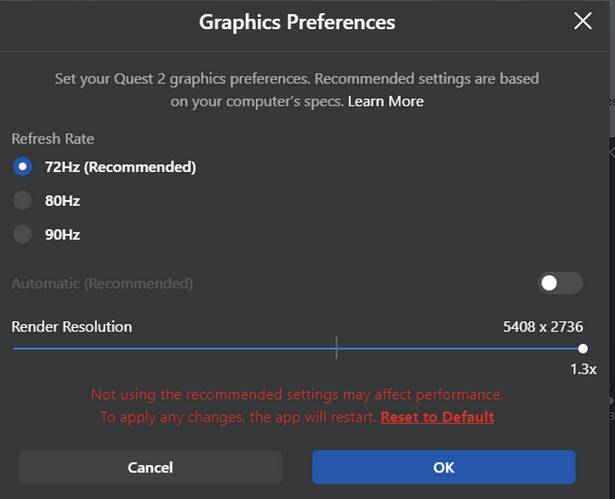 Got it. I think that’s what I’m using from earlier tweaking, but I’ll go back and check. I was just curious how to rationalize the various resolution between Oculus hardware, software, and MSFS software. Curiosity mostly. I’m happy with my performance but always looking for the magic tweak!

I have been playing with settings for months and months like the rest of you to get to something that works well enough. Soo much playing around in OTT oculus app, nvidia settings, windows you name it, if someone said it may work I have tried it…

What appears to be working for me is:

Then go to OTT
Reduce the FOV to .72 , .75
ASW, you will change between the following:
30hz - heavy city areas
Off - medium density but you can tell your card can give you more frames i.e 30 - 31 frames
45hz asw disabled - high altitude or low density scenery - this will give you 36 fps

In nvidia settings, all the usual suspects that people mention but I have put my pre rendered frames to 3 and textures to quality not high performance.

From this point:
Start a flight in a heavy area you like flying. Start flying… then pause. Turn all your msfs VR settings down to there lowest.

Find your absolute best frame rate. I.e 36fps with a 72hz setting. (Ensure your asw is set to off)

Start slowly bumping up each setting looking for a frame drop. If you get a frame drop knock it back to the previous and move on to the next setting. You may see some settings like grass as low priority… just leave it to low and use the left over frames for another setting. Once you have gone to the bottom and have managed to get all your settings bumped up without too many frame drops then go back through the list and bump the features that are important to you… I.e clouds medium to clouds high. If you have managed to keep your your Fps above 30-31 then your in the zone for your hardware setup ( in that particular area your flying)

(Note: when doing the settings changes ensure that your asw is sett to off)

Of all the many different approaches, the OP is the best for me. I’ve tried many and even with my RTX2070, I have been able to get 36fps (mostly) stable - I am using the 0.75;0.75 FOV adjustment recommended by Mewsik. The “buzzing” when looking sideways and down is at a minimum - much better than ASW at 18-20fps. Many have said to stop using OTT in favor of ODT, but with the OP recommending start/stop VR, OTT has more features. Also, using the performance HUD is actually superior to the MSFS Debug FPS display.

Thanks for this post, your hardware is very close to mine, so I write down all my current settings and then try these and see what happens… Worst case I go back to what I currently have set up.