Honestly, the Ireland part of the UK and “Ireland” update was disappointing. There are 3 (or 4?) landmarks added. What about the cliffs of Moher or the type? No update to any Irish cities or any sort of handcrafted Irish airport. The UK received tons of new content. Ireland has barely any.
I was looking forward to the update and now it’s just been a huge let down.
Written by an Irishman

Yes, I agree. I was also surprised (to say the least) they did not include the Poolbeg PP - which is very visible and important VFR landmark in Dublin among with some other landmarks there.

3 unimportant landmarks instead of adding useful VFR points and stuff like that. Updated airports? Nope. Nothing. Complete let down. UK gets around 100+ items, I believe…

It was initially a UK update when it was first announced. The airports were already set in stone. Jorg then later said that they were hoping for some new aerial data coming through for Ireland shortly before the update and they would try and apply it before release. They obviously obtained this and so it was changed to UK and Ireland a few weeks before release, they simply didn’t have enough time to add more Irish POIs.

That’s a rubbish excuse, imo. If you’re going to lob “Ireland” in with the update, then I expect that Ireland receives the same detail as every other country in the update. If not, they could have done it separately.

Just chill… It looks pretty good. I just flew through all the coastal areas.

Ok, send a message to the team to remove any Ireland-related improvements from the last update and remove the “Ireland” from its title. Happier now?

What’s the point in having Ireland in the title if it receives lacklustre attention compared to the other countries? Perhaps they could have released a seperate update with all the Ireland content in it? Instead of releasing a few unimportant landmarks and ticking the box as done?

Unfortunately the quality of textures is significantly lower than was before driven mainly by the current bing map data. For those who fly regularly in this region it is going to be a disappointment.

Here is an example of a coastal area on the border where they have got it wrong I’m afraid: 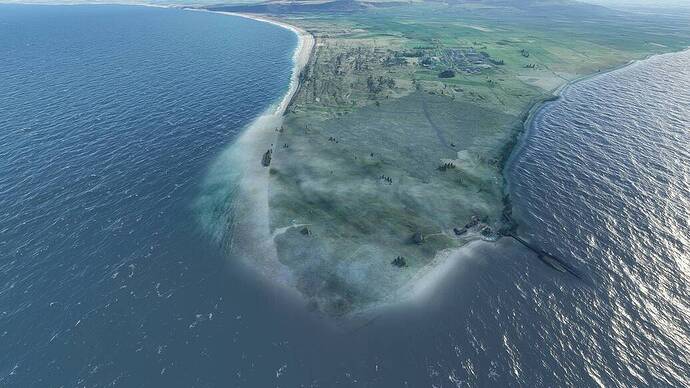 Also, a comment I saw from another person: "I agree. Ireland got shortchanged in this update. They have the white cliffs of Dover modelled yet the cliffs of Moher look pretty much the same as before.

Dublin received only 1 landmark and not a very visible one from the sky. No Poolbeg chimney stacks or spire, nevermind the Aviva or Croke Park.

It’s a bit insulting for Asobo to call it a UK and Ireland update when it’s really just a UK update. I like what they did with the UK but think it’s a bit of a let down for Irish simmers or those who like flying there."

According to everything i see the update is for UK&Ireland. I dont understand how after such an update, the most iconic landmark in Ireland, The cliffs of mohar, looks simply horrible as it looked on first release.

I get it… but it’s ONE spot… It’s not ideal. I haven’t flown through Ireland before, but my coastal trip looked REALLY nice for the most part, except Cliffs of Moher. But this is a sim, not a scenery simulator. I can forgive little issues on scenery here and there.

✓ Newtownards - Northern Ireland (With Real Trees Terraforming) is a Microsoft Flight Simulator 2020 mod created by John Lovell. Download for free to enhance your experience in MSFS 2020.

✓ Bangor - Northern Ireland (With Real Trees Terraforming) is a Microsoft Flight Simulator 2020 mod created by John Lovell. Download for free to enhance your experience in MSFS 2020.

✓ Belfast is a Microsoft Flight Simulator 2020 mod created by John Lovell. Download for free to enhance your experience in MSFS 2020.

Yes, but the whole point of the world update is to improve the scenery. No point lumping Ireland into a “world update” if it gets virtually no update…

From someone who does fly this area regularly the positive is that the mesh has significantly improved meaning in general cliffs and mountains are modelled better. However in general the quality of the textures has dropped. I’ve seen this in quite a few locations I normally fly in. I guess the push to deliver more up to date ground textures has come at a cost. I’m intrigued to understand how they had better textures pre update, albeit a bit out of date. You would think using more up to date bing imagery would come with better resolution.

At the risk of sounding quasi competing - but if you believe Ireland got a raw deal, the land down under in terms of out dated data is way behind the beautiful emerald aisle by a proverbial long shot.

We’re a huge continent/island and in all the flight sim iterations, Australia has been left behind in many ways as opposed to many other parts of the western world. That’s not to say that MSFS rendition of Australia is poor - but when I see these recent updates ie Japan, USA, UK - it’s blaringly obvious.

And the truth is, we have no idea if/when we may ever see an update that truly reflects the continent as it is at the present moment.

The size of Ireland dictates that map updates/upgrades will be easier to accomplish and deliver.

Ireland is roughly the same size of England, so…

[quote=“XCLTM3, post:16, topic:367443”]
The size of Ireland dictates that map updates/upgrades will be easier to accomplish and deliver.
[/quote

And, if we look at the world map we will notice that Ireland is considerably smaller in size as compared to Australia, hence my comment immediately above.

So I’m not clear on the intent behind “Ireland is roughly the same size of England, so…”

Unfortunately the quality of textures is significantly lower than was before driven mainly by the current bing map data. For those who fly regularly in this region it is going to be a disappointment.

That doesn’t make any sense. If the imagery hasn’t been updated, then it shouldn’t be worse, it should be exactly the same. Unless you are saying that the Bing data was updated with inferior imagery?

From my perspective i think its good to separate out two issues:

My issue, relating to point 2, is that for the regions i fly in there has been a significant reduction in quality as a result of updated textures delivered through the world update. Had they have kept the previous textures my enjoyment of the sim would not have been affected, and in fact the new mesh would have resulted in a better experience.