I am averaging 29 - 38 FPS with a 2060 equipped laptop and an original quest. Here is what I said about it In another thread

I didn’t find in your post whether you’re enabling HAGS or not?

I tried HAGS. It was awful.

NVIDIA Quadro RTX 8000 is the most significant advancement in computer graphics in two decades.

I performed a clean install of 461.40 yesterday, and did some house cleaning in regards to my settings within the Nvidia Control Panel and all I can say is WOW!!! Almost zero stutters on my system, which runs the Quadro P4200 gpu and Intel Xeon cpu. I don’t know my fps in MSFS, and am not concerned with that number. All I care about is what I can see. So far this is the best I’ve seen. I took my time and read all of the documentation provided by Nvidia before performing the install. I guess sometimes reading all of the instructions makes a difference. In X-Plane my performance went through the roof.

Congratulations on sharing your experience with this, but wouldn’t it be also helpful to others wanting to share the same experience as yours, to also tell us what settings did you end up configuring NVidia CPL with and what was key in the NVidia documentation you didn’t know which you would advise us to review?

I don’t know my fps in MSFS, and am not concerned with that number. All I care about is what I can see. So far this is the best I’ve seen.

It is unfortunate because if you’re past experience is running FS2020 at 10fps and your settings raise those to 30fps, there is no question about your WOW reaction. But for some others already running at 50 or more fps, numbers do matter at least to try projecting what “performance” level are we talking about. Would you mind letting us know what these were and what these are now?

The documentation is there for everyone to read and it is there for a purpose. Nothing singularly stood out. It was the amalgamation of everything I read which prompted me to perform a clean installation.

In regards to the numbers. What good would it do for me to state my fps now when I don’t know what they were before? I’m certainly NOT going to revert my system to its previous state just to satisfy curiosity. I’ve never tracked numbers and am not about to start. I go by what my eyes see, not by what numbers say I should be seeing. I know what my eyes tell me, and that is good enough for me. Chasing enigmatic fps numbers is a waste of time.

Have a great day.

I’m sorry to have made you loose your time, a great day you too, thank you!

Your input to this forum and FS2020 is both valuable and appreciated.

I try to listen to any ones experience, but I have now done 4 complete new re-installs and have not seen any positive results from them.
Just FS2020 like it was before.

This “installation” trick is nice and could come handy, thank you for sharing too!

As for the 461.40 there are some reporting CTD, stutters, failures, bugs, and some others reporting all is fine with their systems. It is certainly not the best driver year for NVidia and for once it seems AMD is better. Too bad 85% of simmers are using an NVidia and XBox is using an AMD… 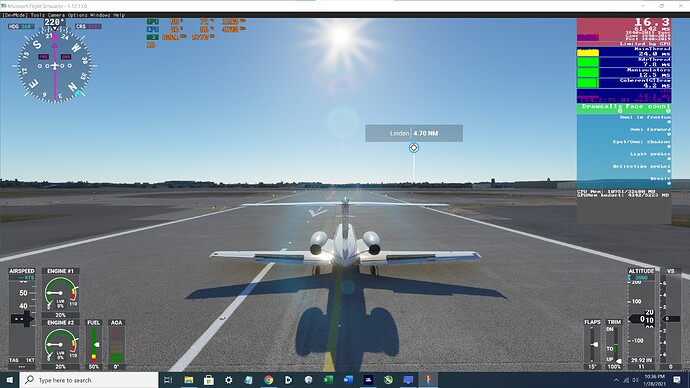 What Nvidia driver did you upgrade from? TIA! And did you preserve everything from before in the custom install or was it a clean install? (dumb questions from a newbie!).

preserve everything from before in the custom install or was it a clean install?

I don’t know what you mean by “custom”.
I listed the exact steps that I did. I don’t consider that as “custom”.

Also, nothing in my “Community Folder”.

Also, I did not mention that the options in FS2020 under
“Options, General” were changed.
I assume by the Driver install or Nvidia Geforce Experience.

I have read somewhere that Nvidia would determine the
best options for their Graphics Card.

@MSFSRonS. If one uses GeForce Experience, I vaguely remember the options are Express and Custom (if the “custom” term is not at that level, it’s at the next step). But I think the next step is Clean Install or just an upgrade and you get a listing of what’s going to be carried over from before and what’s actually going to be new in the “custom” install. Last few updates, it’s just been the Nvidia driver largely.

I’m asking because so many folks have reported bad results with installing 461.40 so perhaps there’s something “magic” about EXACTLY what you did, like reinstalling the ~1 Gb MSFS Store download. So maybe if I can get up my courage(!), I’ll give it a try and see if I can replicate your good results. Thanks for the further explanation!

It does not give you any choices to make.

I don’t know what you mean by “custom”.

Thanks for your clarification that you chose the Express installation option after the initial driver download.

As shown by my screen capture below, after initial GeForce Experience driver download, the other basic option is indeed “Custom Installation” - which is the one I’ve always chosen in the past to see what I’m actually changing.

Thanks for the heads-up on the Options, General changes. I’ll make a backup copy of my UserCfg.opt file.

Let us know your results…

I’m not sure to understand the whole idea behind the process now.

I get it you did find reinstalling FS2020 is helping you restoring better fps with the latest NVidia driver 461.40. But is 16.3 fps in the screenshot the “better fps” you were aiming for?!?!

I had initially upgraded to 461.09 with no problems.

Also note:
All driver installs were done under Geforce Experience.
Don’t know if that caused the problem.

Also note:
My FS2020 options under “Options, General” were changed by the driver changes.
Don’t know if Geforce Experience or the driver itself changed them.

I can’t upload a video because I don’t know how.
Geforce Experience will not due to file size (the error states).
But here is a screenshot over NYC in the WT CJ4.
Smooth. 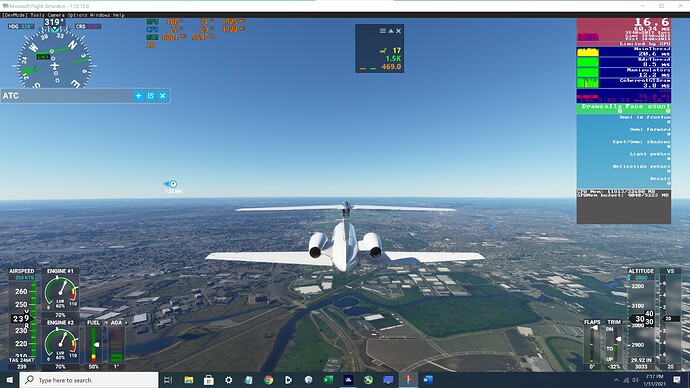 A complete disaster for me. CTD 100% guaranteed.