Yes, you can, on all of them. It is just that in flight they do not always show. We are not 100% sure why and are asking Microsoft.

A lot of things have been changed in SU11 in regard to choppers and we are still learning.

Good price! I assume it will come to Orbx Direct at some point (soon…)?

is there an FPS hit on PC?

If you try to land on the multimillion polygon on machines that are not reasonably fast you might see a drop in FPS. However, you are out at sea, no mesh, no terrain, no autogen, next to no AI traffic (another reason we select to go for static objects).

So basically the FPS impact will be minimal. I drop below 40 FPS when I approach the two most complex objects (both over 3,5 million polygons) on a $1250 machine. Nothing I would ever consider problematic.

This is the 5.7 million polygon object. 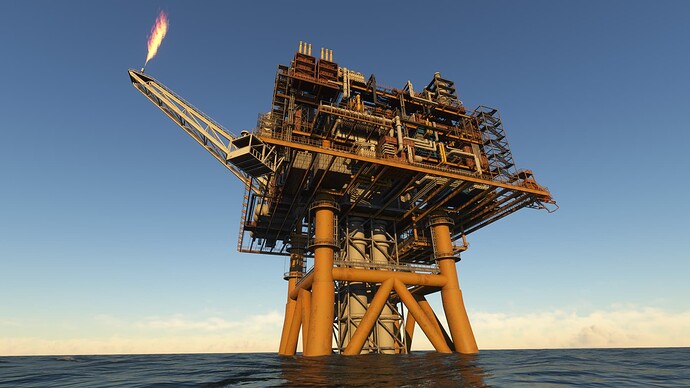 We inserted it as a joke, we were sure the sim engine would not be able to handle it. Turned out that the graphics engine had no problems whatsoever as long as we used the full SDK and added LODs etc. People have no idea how good the MSFS graphics engine is. We have not found a way to break it.

Good price! I assume it will come to Orbx Direct at some point (soon…)?

It has been sent to them this afternoon.

I wonder what value GTA5 is on that basis?

Manual suggests disabling other AI ship traffic. Would be great see version without ships so we ca still use other packages like Global AI Ship Traffic MSFS V2. I would want this but without ships included.

Nice price! been waiting for this for a while now.

I will be picking it up! this coupled with FSRealistic FPS addon will be really good!

We have camping, and now we have oil rigs!

Wow yea. I’m gonna set up a camp and dangerous open fire on the platform! No health and safety officers present I hope!

Manual suggests disabling other AI ship traffic. Would be great see version without ships so we ca still use other packages like Global AI Ship Traffic MSFS V2. I would want this but without ships included.

But why would you? We add 100% accurate shipping traffic. In our product, you will see a tanker (you can even find its name in the manual) at EXACTLY the right location and heading it was. We did not place a single ship randomly. How can any other DLC be more realistic?

Of course, we can disable our ships that are on shipping routes, but you will end up with random ships following more or less random routes. They will sail through wind parks and construction sites and will collide happily with any of the 6000 objects we placed.

Look, we discussed this for weeks and we simply do not see how replacing the ships enroute with any other DLC would make it better. You simply do not need it because we replace it all with ships being shown where they actually were.

Fishing vessels fishing or en route to their ports, dredgers preparing construction sites, cable layers laying cable from wind parks to shore, cargo ships en route to Stockholm. We also add all the ships that are at anchorages waiting to enter a port (35% of all ships in the covered area are at anchor!). These are all things other DLC simply does not cover.

Can we do it? Sure. If you can give me any solid reason why random traffic would be better then what wen do, we’ll even consider it. But do not come complaining about ships that are where they should not be.

How can any other DLC be more realistic?

Well, ships tend to move. If they didn’t, they’d call them “islands”.

Also, I’m not sure if you are familiar with Global AI Ship Traffic, but the ships in that package don’t just randomly roam the seas. They are on real life routes as well, which will improve even more, once the real time/real life ship traffic version comes out. It doesn’t get more real than having the correct ship in the correct position at all times. Moving ships, that is.

I wonder what value GTA5 is on that basis?

If you look at the assets (so excluding code and logic) GTA is about quadruple the size and triple the price.

Well, ships tend to move. If they didn’t, they’d call them “islands”

Have you read the manual as we suggested? We do have very solid arguments, but if you want to discuss them, I am ready! I can only say that we did not tell any of our testers the ships were static and none of them (not a single one) noticed. In the end, we ended up with over 700 ships where helicopters can do operations. With moving ships that would be 0.

Btw, 35% of ships in the covered area are not moving but were at anchor when we made our snapshot.
And these are the ship at anchorages in areas where you tend to see them easily.

Also, I’m not sure if you are familiar with Global AI Ship Traffic, but the ships in that package don’t just randomly roam the seas. They are on real life routes as well,

I am very well aware, we are working with these people. And their routings are okay on the high sea. But they simply do not cover the rather complex routes into a port. Nor do they cover any of the construction traffic (that is over 45% off all shipping).

And most of the ships you will see will be static. Just as they were in real life at Jan 20th at noon when we made our snapshot.

No point in discussing. Aerosoft knows best what you need to like. A Twin Otter without proper sounds or dynamics. An A330 coming up without cabin and the North Sea without moving ships (its the busiest shipping lane in the world).

You can have any car you want as long as it’s a black Lada.

All I know is that it would be imprudent for the North Sea addon not to support working in tandem with one of the most successful and best nautical freeware projects. 148,668 downloads and counting.

I suppose when the new Live GAIST becomes available then there won’t be the option of guaranteed no clashing. They will go where they go. That goes for all the other Ship additions like the various Vessels packs from Seafront Simulations etc. too (of which I’ve bought a few).

At ports we are bound to see some oddities of clipping. I would have thought in the oceans the chances are pretty low that they will share exactly the same spot, and even less likely you’ll be flying there at the exact right time if they do.

But still it’s a mild worry for the immersion stakes.

I am very well aware, we are working with these people.

What do you mean by this? Have you found a way that one side or the other will be excluded in places where ships can occupy the same space?

The additional concern is, if you are telling me that I need to disable all other nautical packages, that I would have to disable Seafront Simulations southern England pack. That adds the docks and harbors which this pack wouldn’t, since IT’S focus is the ocean. I want the ocean, but I also want the piers and harbors around England.

It’s now very easy for developers to exclude sections of other projects.

I expect some will exclude parts of this if there are egregious clashes.

There may be some orphaned heliports though.

I can only say that we did not tell any of our testers the ships were static and none of them (not a single one) noticed.

Then you need new testers(!), if all ships are static that’s an immersion killer right there, I want to see the wash behind big tankers, construction ships etc.

Thanks a lot for your reply!

What do I need to enter to get to this object in the sim?