Hi. I have been able to do a few circuits in VR using Oculus Quest 2 with a GTX 1650 using Virtual Desktop\Steam VR and VR graphics settings on low, but the instruments/glass cockpit was basically unreadable on the headset. It was perfectly readable on both left and right images in the ‘Steam VR Preview’ window on the PC, so I’m assuming it’s a compression issue between PC<>Virtual Desktop<>Steam VR<> Oculus

Has anyone managed to use Virtual Desktop & SteamVR for VR flying and been able to read the instruments clearly, or is everyone using Quest with Oculus Link?

I can’t use Oculus Link, as it needs a 1660 SUPER or above to run (whenever I enter Link mode the headset flickers and is completely unusable).

I get pretty good frame rates in non-VR; 30-60+ frames on High/some ultra, and with increased building densities, even in cities. I can also run other quite demanding steam VR games (I’ve not found anything I couldn’t run yet).

In the headset and virtual desktop settings, in the STREAMING settings bump up the bitrate quality.

(he’s going to get sick of me tagging him one day but his thread is awesome!)

Also make sure you read his recent post at the bottom of the thread about setting OTT supersampling 1.9 and a few other pc tweaks.

Thanks @GalacticClown15, yeah but rate was max

Thanks @CroppingPoem113, I think @TonyTazer1504 awesome article is for Oculus Link though, which I can’t use as graphics card isn’t good enough for oculus link

Do OTT settings even apply without the link cable? (Ie SteamVR though Virtual Desktop)?

Ah I see! No, I doubt OTT works with VD… you could try recreating his settings but instead of using OTT apply those settings in whatever the equivalent is in steam VR?

That’s just a guess though.

Has anyone managed to use Virtual Desktop & SteamVR for VR flying and been able to read the instruments clearly, or is everyone using Quest with Oculus Link?

If yes, I’ll carry on tweaking the settings

I’m just not sure Virtual Desktop/steamvr is capable enough??

You mean you have VR bitrate at the slider all the way to the right? What about VR Graphics Quality setting? These settings right? 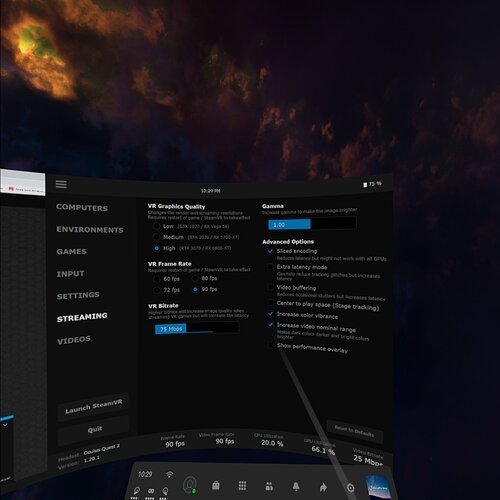 I was flying (when not CTD) with Pimax 5k+ and Steam VR.

Sitting in a normal seat distance to the instrument panel it is hard to see the displays. I will either right click on the mouse to zoom in temporarily, or when flying instruments, may just zoom in close.

The PFD and MFD are then crystal clear. But only when zoomed in up close.