Please use this thread to post your impressions and feedback about the Gee Bee Model Z and Model R-2. For more information about this historic aircraft, please see our feature editorial here.

My first impression is that they are a real handful to taxi and take off (I finally gave up and didn’t care if I actually used the runway or not) - maybe some more practice is needed but these are by far the hardest taildraggers to taxi and take off with that I’ve tried. I suspect some is also due to MSFS’s ground handling issues. Taxiing mostly because the forward visibility is terrible, as you would expect with a plane like this.

They’re fun once in the air - and there is a pretty cool effect where the canopy will vibrate around at certain speeds. There also seems to be a lot of wind noise. Being from Carenado, the graphics are top notch.

So, based on maybe 20 minutes of playing around - they should be fun planes, and 2 planes for $15 isn’t a bad deal.

Not the biggest fan of that diamond steel texture on the Z model but that’s a minor issue. The aircraft gets real squirrely when taking off. Even with rudder assistance turned on you need to to walk the peddles to keep it in line.

Taking off you have to get to speed quickly, slowly coming up to speed like in other taildraggers doesnt work here. Push the nose down once the speed is up and it will come off the ground around 120-130.

You have to wrestle it the whole way, what a handful!

It took me three tries to get this off the runway. Once I moved from a medium dirt runway (thinking “period”) to a big paved one, it was much easier.

There’s disturbing video (film) of a 1931 crash online that apparently happened when a gas cap came loose and came through the (thin) windscreen and incapacitated the pilot.

I love the audio and the visual shaking on the canopy. This was a super-lightweight aircraft designed to give aerodynamic support for a big engine, and it wasn’t built to be “solid” or quiet in any way.

Kudos to Carenado on this pair. I’ve only had a lunch break’s worth of flying so far, but I’m impressed so far.

Loving it, great value for the money. As others have stated, a real handful taking off and landing!

Yeah, as someone said, a real handful to land… 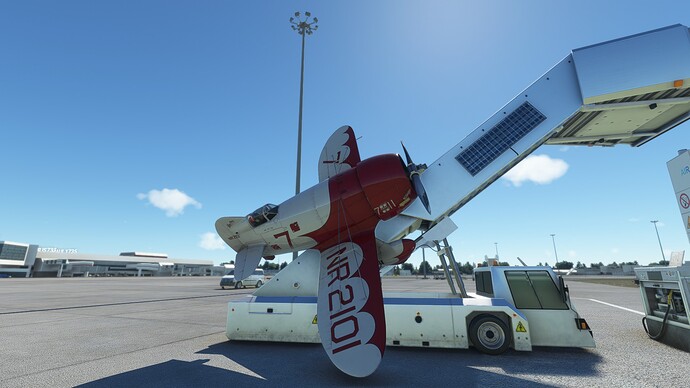 So yeah, somebody who could race one of these might grow up to fly a B-25 off an aircraft carrier…

Any developer that can’t be bothered to add these two lines to cameras.cfg shouldn’t be allowed to publish addons to the marketplace. Thanks for the unnecessary CTD.

That aside, once I got into the sim with it, I’m quite pleased. It’s a complete pain to takeoff and land with, as it should be. Please fix the camera issue and it would be perfect.

Also, I found a texture error. 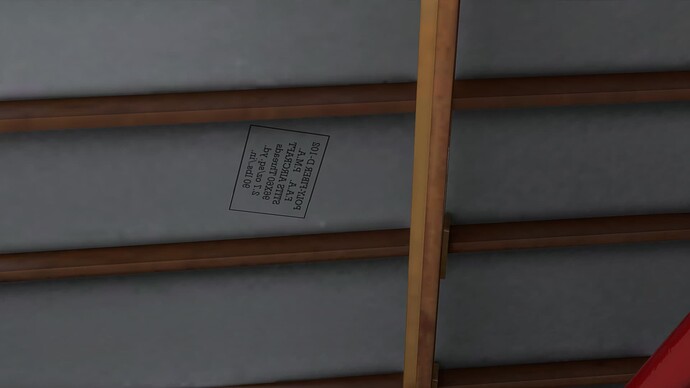 You can’t park that there

Love the pedal dance on takeoff and and landings😀

And in the air, wow fantastic plane to fly♥️

I had trouble on take offs until I realized that ‘20’ is the default trim which Caranado made it get automatically applied. I reset that way up to 60 and it takes off fairly straight and true because it has no time to go squirrely before rotation. Then I immediately spin the dial on my Logitech multipanel to put the trim back down to 20. 20 being the correct trim for flying straight and level. For landing I use 28 trim. I try to be at 130 kts going over the threshold coming in.

All this because it has no flaps. My 60 and 28 vertical trim makes it behave like it did have flaps, sort of.

I really love this plane !

I got overstress damage and black screen already at 250kts in a dive. Is this normal? I thought this is a racing plane. (I used model Z)

The max speed of the Model Z is 232 knots (per Wikipedia), so getting overstress damage at 250 knots sounds about right.

Picked up this plane today and what a spicy plane to fly! Took me a few attempts to get it in the air, the only other tail dragger I’ve had experience with is the Spitfire. The GeeBee is quite different however, you can pretty much punch the throttle and hold on for dear life, with the occasional wild rudder input to keep it straight.

Any tips for less stressful takeoffs would be awesome if anyone has experience!

edit: I would looove Asobo to fix tail dragger physics.