Said pre-release beta testing was cancelled since that blog post was made.

@Jummivana Thank you for featuring my freeware MSFS Mobile Companion App in this week’s development update! I appreciate it a lot!

So I’ve learned subsequent to my post. Which is odd.

I’ve got some mixed feelings.

For me, that doesn’t instill confidence in SU7’s quality. Then again, from what past beta testers have said, they release without fixing the bugs that they reported anyway. Only with beta testing, at least they’re aware the bugs are there…

it was originally listed for the 18th as shown here

DX12 and a replay system? Oh man I feel tingly

but … they removed the date from the original post here iirc We are pleased to announce the Microsoft Flight Simulator Game of the Year (GOTY) Edition. This new edition celebrates all the positive feedback, reviews and awards garnered, but it is also a “Thank…

Then again, from what past beta testers have said, they release without fixing the bugs that they reported anyway. Only with beta testing, at least they’re aware the bugs are there…

From my experience I’ve seen all varieties - stuff that’s been fixed vefore release, stuff not fixed and left and other stuff left but then (relatively) quickly hotfixed. Beta testing to date hasn’t left sufficient time to deal with anything other than the most major of bugs (and only if they can be fixed reasonably quickly too) - so inevitably small, but noticeable, bugs are left and go live and join the (ever expanding) backlog.

then (relatively) quickly hotfixed. Beta testing to date hasn’t left sufficient time to deal with anything

Agreed! In the case of SU5, some of the biggest bugs were fixed with hot fixes. I would prefer them delay a release and get it right. But that hasn’t worked out too well for them in the past either. The 2 majorly delayed updates were some of the buggiest to date.

The issue could very possibly be your GFX card

In the case of SU5, some of the biggest bugs were fixed with hot fixes

Yep, spot on - SU5 of course restricted by a nailed on launch date. SU6 I thought was the best yet, so maybe things are improving, but they need to keep that direction of travel going. With the delay in the Top Gun film, I suspect that’s taken away another hard date for them which can only be helpful.

TBH the sim is running about as well as it ever has for me right now, other than the glitch the other week for those of us who were SU6 beta testers which screwed things up for a day or so. I’ve got no major game breaking bugs at all really.

Obviously things can still be improved, but I’ve got so much to go after right now - learning to fly the DC-6 without the AFE is my current goal. Then I’ve got the Hawk, Spitfire, Corsair and Lightning to go after, and then move on towards the airliners - CJ4, CRJ then the FBW A320…by then PMDG will have their 737 out…

TBH the sim is running about as well as it ever has for me right now,

SU6 has been the most stable for me in quite a long time as well. Although since last weekend, I’ve had a whole bunch of mystery CTDs out of the blue where I’d only had 2 since SU6 launched.

Love how from SU5 we don’t have vibration for xbox controller… just… how?

and some bugs with pan and zoom with mouse, annoying cursos when you move the camera… etc etc…

just… HOW no updates with that?

Although since last weekend, I’ve had a whole bunch of mystery CTDs out of the blue where I’d only had 2 since SU6 launched.

Now that’s funny, as I had a day of CTDs as well flying the DC-6 last weekend. I ended up reinstalling it and it’s seemed OK since then. I thought that was due to the phantom update that some of the SU6 beta testers got by accident - but maybe not!

It could also be the CPU bus or the monitor, for example, but the point is, I have a less powerful system (i9, 2080) and see no banding at all. How do you explain that?

There is still testing going on, just only for a smaller group.

Online players disappearing bugs need fix please, it makes no more fun fly with friends around when there always disappearing, this bugs is since SU5

NOTHING is mentioned about the problems of the Bush Trips although it has 254 votes. Unbelievable!!!

What’s the point of a dev update if they’re not actually…you know…updating the bugs list?

Bush Plane flights and bugged Achievements need a hot-fix ASAP/NOW. Asobo, listen to the community this is unacceptable

Why is the multiplayer disappearance bug not included in the list of TOP BUGS?

Do you have any add-ons in your Community folder? If yes, please remove and retest before posting. no Are you using Developer Mode or made changes in it? no Brief description of the issue: in multiplayer the other players appears and disappears. If I switch the server he can see me but i not. if he switch the server and return to the previous server i can see him but he can’t see me…This is fully broken…The multiplayer is broken…I don’t know if is a server overload problem…But i think is a… 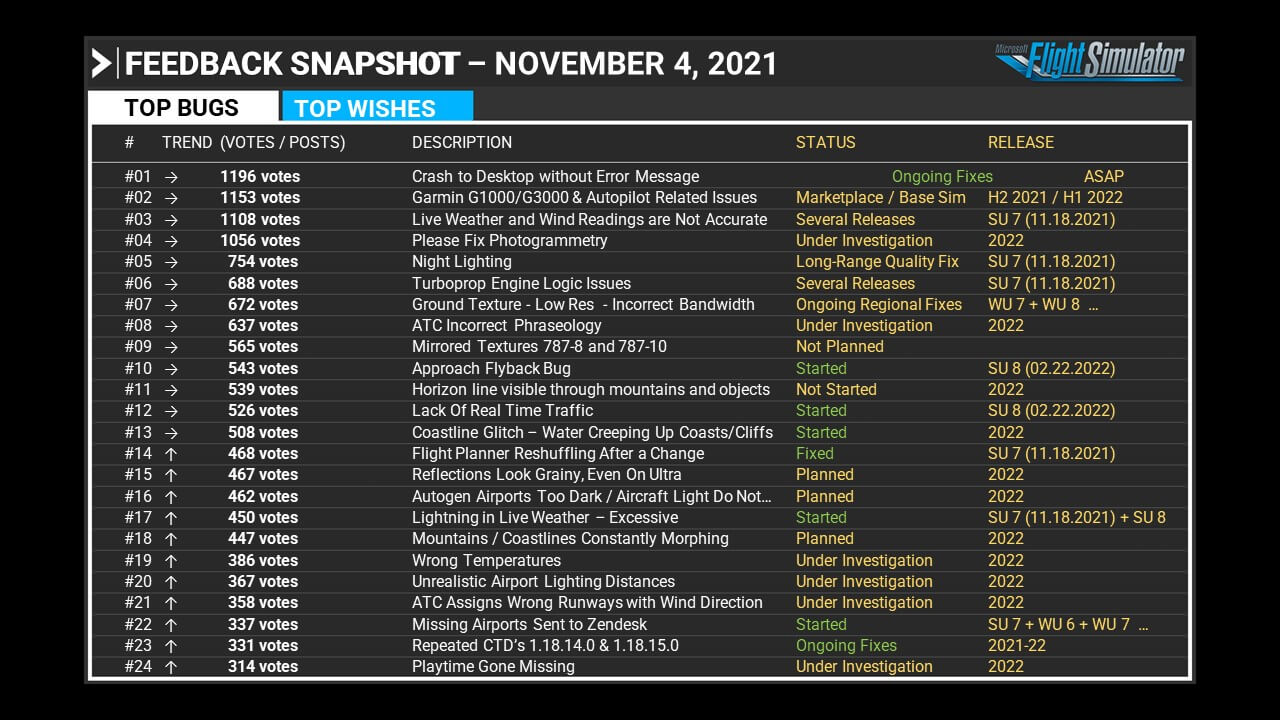