Oh no, not another "Am I CPU bound?" thread

At the risk of going over ground already covered. I’m particularly wanting to know if I would see an increase in performance, now after wu5. I couldn’t find many discussions post wu5.

I started out with an RTX2070super and i5 10600KF and recently updated to an RTX3090. However I kept the same CPU. This is a well respected CPU as it has a high clock speed for the $, and many games didn’t take advantage of more cores. Something I thought FS2020 was also “guilty” of.

Looking at task manager, it shows that my CPU isn’t working that hard. But is this misleading ??

I should also mention I am using a Pimax 8kx.

Enable developer mode and look at the frametimes and “Limited by” information to get a near-100% accurate look.
If you’re rarely “Limited by GPU” you’re probably CPU limited.
Also, if CPU frametimes (mainthread, coherentgtdraw, renderthread, manipulators) are often higher than the GPU frametime, you’re CPU limited.

To clarify one thing first … you will always be “limited” (either CPU or GPU) and that is totally normal. I personally prefer to be bound by the most expensive part (for my clearly my GPU) in my rig, as that basically means I didn’t waste money, buying that part.

Besides the already mentioned Dev-mode FPS counter … as you are obviously talking about VR, there should be Performance graphs for CPU and GPU specialized for VR available inside the SteamVR settings (guessing that’s what you are using for VR).

Looking at task manager, it shows that my CPU isn’t working that hard. But is this misleading ??

You will probably not be bottlenecked by your CPU, at least not in any way in which a newer CPU would help.

As others have said, turn on dev mode and see if it is waiting for GPU or CPU. Waiting for GPU on a 3090 is as good as it will get. Waiting on CPU, that is when you are bottlenecked.

Using VR will be more intensive so while that CPU has a good base clock, it is using PCIe 3.0 lanes (newer gens are on 4.0) as well it only has 12MB cache were newer have almost 3 times as much. Those two things alone (if you are bottlenecked by the CPU) will offer better performance.

How much to what you’re getting now and is it worth the price is another thing.

Thank you all for the quick replies.

I used dev mode and in 2D it says GPU limited, but in VR it constantly flickers between CPU and GPU limited. So not sure what that means??

I’m not sure what all the other info is really telling me though.

In steam VR it shows the GPU pegged pretty much all the time.

I would interpret that being a Good Balance between CPU and GPU load. Sems your CPU fies your GPU well.

Unfortunately that could mean, whatever you Update might be your new „bottleneck“.

And as you Said you are already having a 3090 and the 10600 kf seems to fit that just Fine. So i wouldnt Expect too much of a performance upgrade from a faster CPU.

Maybe it could help Running other Apps in parallel … but for the sim itself, i think you might be maxed out already.

Just so you know, I did similar to what you’re suggesting. I have an all-AMD system so ymmv from my experience.

I had a Ryzen 3600x and 2070 super system and fly in VR with a reverb G2. In February I bought a new GPU (6900 xt) but kept the same CPU. I got a really good performance boost but when putting the settings really high I was getting micro-stutters. Therefore I normally backed off on a few settings and had no problems. The dev mode framerate counter told me I was GPU bound so I didn’t worry about the CPU.

In July I finally decided to update the CPU to a Ryzen 5800x. It was my birthday so I splurged a litte. I only gained 2-3 fps but I could now turn the settings higher without getting the micro-stutters. Overall I’m glad I splurged.

Thanks for the extra input.

Oddly in windows task manager the CPU never gets above 37% and the GPU about 15%.

Just to confuse things further. I thought I would go back to the quest2 with air link and I could max everything out and it looked better and was smoother than the 8kx. Oh to have a wider FOV on the quest2…

While it is good that you achieve a few extra FPS and less stutters with your CPU upgrade, you did so before SU5 at a time when FS2020 was much more single core CPU bound and stuttered to some extent for most people. Since SU5, FS CPU load is much more balanced across cores and smoothness has improved signifcantly. As such, and I mean this nicely, your results are not necessarily applicable to the sim we have today.

Unless at least one of the OP’s CPU cores is regularly bumping along at 100% when running FS2020 WU6HF with their given settings, then I doubt a CPU upgrade will do anything to improve FS performance.

Unless at least one of the OP’s CPU cores is regularly bumping along at 100% when running FS2020 WU6HF with their given settings, then I doubt a CPU upgrade will do anything to improve FS performance.

None of my CPU cores were ever bumping up against 100%. Not before with the 3600x nor now with the 5800x. I regularly monitor my performance and my CPU usage has always been around 20-30%, no matter when I check so I think there’s more to it. That’s why I just told my story. I can’t explain why. My guess would be that the 5800x just reacts faster than the 3600x. I think now my gpu and cpu are more evenly matched and that alone helps the gpu get a little better performance as well.

OK, I’ve just bid on a i9 9850 cpu. Its a reasonable price for unused. If I get it I’ll post back my findings. Which hopefully might help others in the same postion.

Just an update on how much CPU doesn’t really matter in FS2020 in high resolution scenarios, I ran a test flight on the ground at KLGA RWY 31, 787-10 and mostly cloudy conditions to give the sim as much of a workload as possible.

I’m running in VR at 90 OXR/100 TAA, giving a resolution per eye of 2988x2924 per eye, so roughly 6K resolution. The top half of VR settings are on ultra and the bottom half are on high. These are the settings I actually use in VR.

Firstly at my overclock speed of 5.2GHz 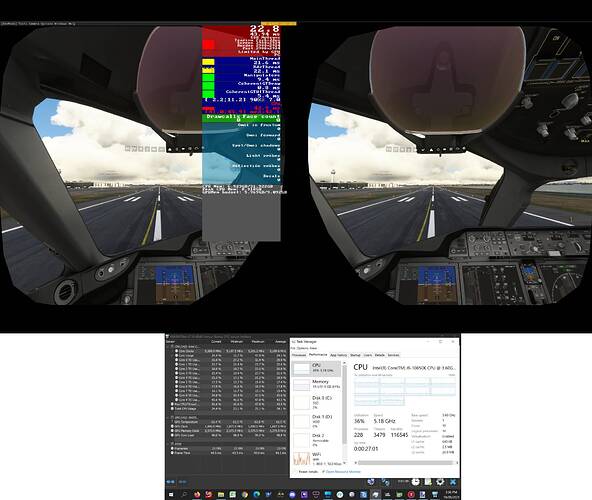 Now with turbo boost disabled so “only” 3.6GHz. 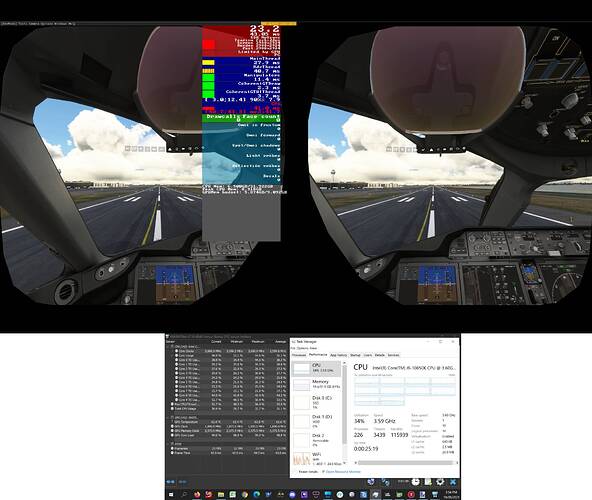 In a nutshell, basically neglible difference in performance (see the HWInfo 1 minute average frame rate being 23 FPS for the both of them), despite my overclock being 44.4% higher than the non-turbo boost frequency.

wow, thanks for all the great info there.
Too late, as I bought the CPU. Oh well, hopefully in the future FS2020 might take more advantage of the CPU ? Or is that not going to happen due to xbox coding???

I was wondering if there were other advantages in a higher spec CPU, other than outright cycles. Onboard memory for instance ?

In a nutshell, basically neglible difference in performance (see the HWInfo 1 minute average frame rate being 23 FPS for the both of them), despite my overclock being 44.4% higher than the non-turbo boost frequency.

Good test, I am quite surprised just how little a difference it makes!

I was wondering if there were other advantages in a higher spec CPU,

I seem to remember someone saying that the LOD ranges are quite limited by the CPU (although haven’t seen a good test done). For reference I am running Quest 2 at maximum res and 100 render scale and 300% LODs and settings high/ultra and getting between 20-30fps depending on location (this sounds low but I am happy to prioritise the high res and long draw distance), with 10850k and 3090.