I made a post (link) about some issues I was having with my G2, where I essentially couldn’t get VR to work with MSFS, when OpenXR was enabled. This was disappointing as I couldn’t utilise OpenXR and optimise my VR experience.

I instead had to use SteamVR, and constantly had a message within WMR to say that OpenXR wasn’t enabled. As such, I presume MSFS wasn’t using OpenXR at all.

I’ve recently noticed that VR DOES work if I do the following:
SteamVR->Settings->Developer->Set SteamVR as OpenXR Runtime 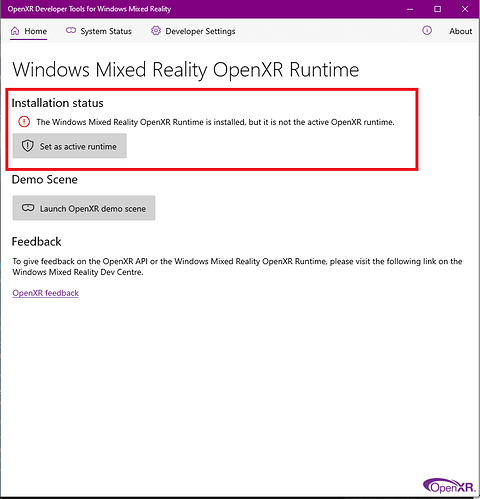 Essentially, I’d just like to know if OpenXR is being used for MSFS VR, regardless of the fact that it’s enabled through Steam? Hopefully I can start optimising my VR in-game from here forward.

Many thanks to anyone who knows!

On my system I have the steam version of msfs and I use OpenXR for Reverb G2, but I do not have steam vr installed at all so I’m sure I am only using OpenXR. I usually start windows mixed reality before I start the sim, but I start the sim in 2d and use ctrl-tab to enter VR after I start a flight.

I don’t have the steam version, but without SteamVR, it doesn’t seem to work for me at all…

Further to the above, this is the notification I see when SteamVR is the OpenXR runtime. Does this mean OpenXR isn’t working? 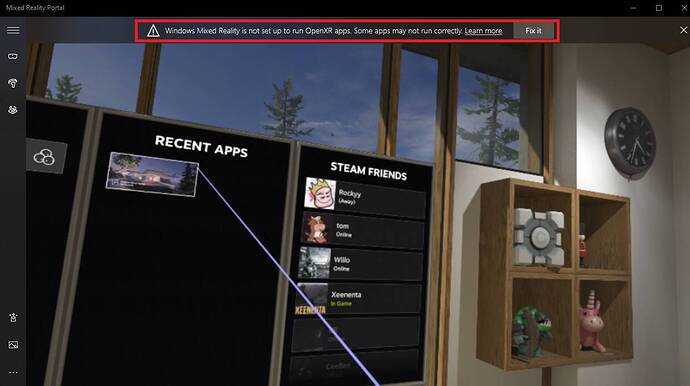 Steam have their own implementation of OpenXR (i.e. their own runtimes) which is what you are using.

The OpenXR Dev Tool only applies to when you are using the Microsoft implementation of OpenXR, so the only settings that will change your experience are those in SteamVR.

Mostly, it seems that native OpenXR (i.e. Microsoft’s runtime) performs better than Steam’s when you’re using a WMR headset, but I totally understand if you can’t get it to work!

PS. I had a look at your other post about it not working. Have you tried removing Windows Mixed Reality completely and reinstalling (reinstall is auto when you re-plug your G2)?
It’s a bit of a tricky one: I had to do it when a Windows Update wouldn’t work. I posted here about it (but I think someone else on that thread explained how to actually do it - sorry can’t find that post):

Yes, it’s odd the way you need to uninstall it from within the Mixed Reality Settings area. I also downloaded the specific update package from Microsoft Update Catalog as a standalone installer to install it that way as Windows Update itself was having problems. Once I did that, I re-ran Windows Update, which said it was installing the troublesome update again (I don’t think it did, but it said it was successful) and then I was back up to date with patches. Plug in G2 after that and let the M…

The settings in your screenshots are set up to use SteamVR.

For MSFS in the Reverb G2 you should set the WMR OpenXR runtime as the active runtime in the OpenXR dev tools.

If MSFS isn’t working with OpenXR enabled in the WMR dev tools then you should troubleshoot that and get that working before doing anything else.

But as said by others above, the Reverb runs on WMR which uses an OpenXR Runtime. So if you are running a Reverb, it is using OpenXR.

The confusion is that there are (at least) two versions of OpenXR Runtime - the Windows Mixed Reality version and the SteamVR version.

To add to the confusion, what will run on which version is also changing as various updates are put into place. The good news is that at each update, it seems to be moving towards a situation that either version will run (at the very least) both MSFS and X-plane. Up to a few months ago, that wasn’t the case.

So - if MSFS runs OK for you on SteamVR, then yes - it is running OpenXR, albeit the SteamVR Runtime version. But don’t fret - in a number of experiments I’ve done both on MSFS and X-plane, there seems to be now very little difference between the two OpenXR Runtime versions (using latest updated versions) so I don’t think you are losing out.

To add to the confusion, I believe G2 can work with Steam’s original OpenVR (traditionally known as “SteamVR” and developed by Valve), the newer Steam Open XR and WMR Open XR.

Just click “Fix it” to switch to WMR OpenXR.