Oversized taxi and Runway signs in some default airports [Request #93409]

Coming from this thread, I think it was time to report this as a bug

Since las update, some taxi and runway signs are oversized. I don’t have any problem if devs want to include a slider for the sign size, but right now I think this is more a bug than something intended.

This one is at LFRE, and you can see the right sign is almost as tall as the Robin. 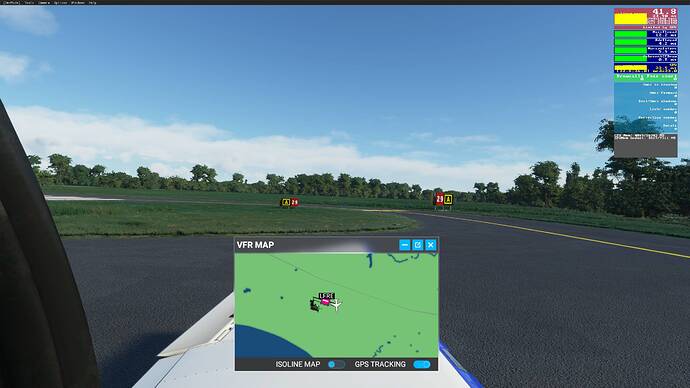 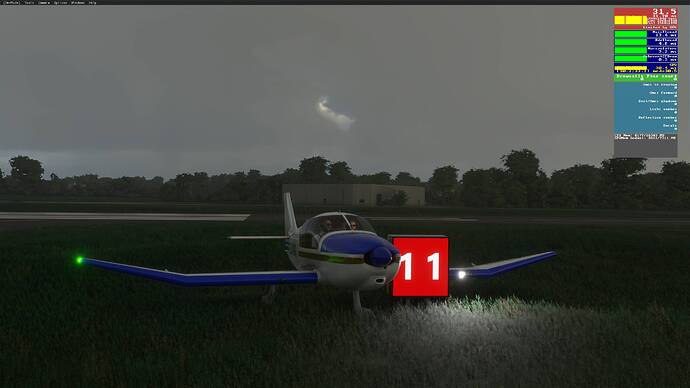 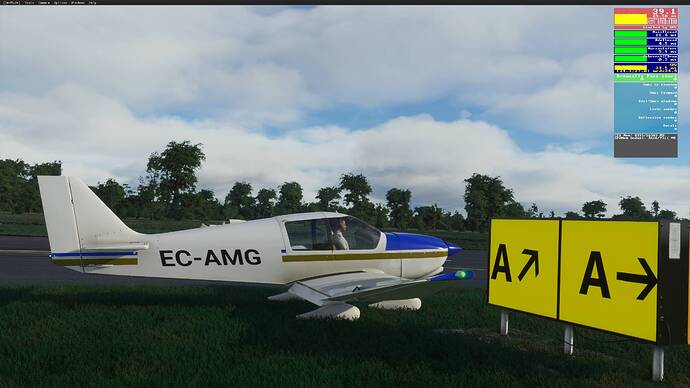 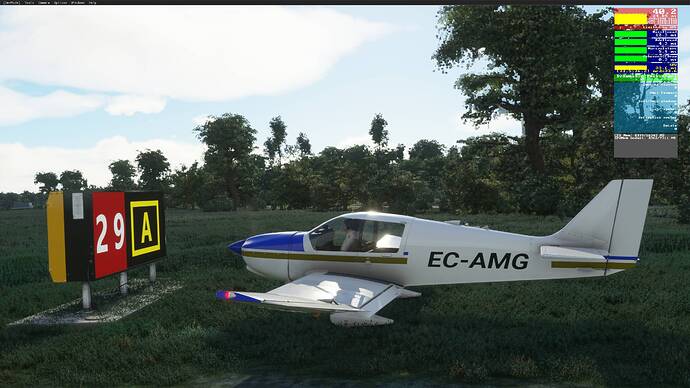 Feel free to add your own locations, but I think is a worldwide bug.

Ya see, the problem is that many people complained that they were too SMALL before this update. When you are in the cockpit, you really couldn’t read them well at all.

So apparently they made them bigger, which personally, I like the new size because you can read them better from within the cockpit.

If you take selfies of your plane beside them, then yea they are way oversized, but for navigating your way around an airport, the new size is good, IMO.

Readable they are, which is absolutely a good thing, but it’s still strange.
I wonder in what other way they could be made more usable, but I don’t know.

Great then have it be an option.

but for navigating your way around an airport, the new size is good, IMO.

The thing is, not even the real life ones can be seen from that distance so well. At least this should be an option, because as a simulator, this is a immersion breaker. Those signs are bigger than half of GA aircrafts…

Looking at the first image, it seems like they just did a cheap rescale instead of the proper way??
The length of the supports should be the same for sign size 1 through size 4: 27cm.

What the hell, I gave you a list with the exact sizes. I’m disappointed.

edit: it gets better, it seems they didn’t listen at all, except make the signs larger. The text is still not 50% of the sign size as it should be.
Also I don’t think an airport is supposed to use multiple sizes?

Even if they try, even if we give them all the details, they cannot get a thing as easy as some signs right.

I agree with everyone. They could have payed attention to detail and got them right. I also like the idea of a slider so the user could choose what they want…like they do under accessibility for UI size.

Pretty sure it’s in the build notes or was in with sdk stuff they increased the scale of the signs intentionally as they where smaller than they was meant to be I suspect the largest size signs where used when airports where created and now devs and 3rd parties need to drop the taxi signs down one size.

Out of curiousity, how big are they in real life? It’s kind of hard to tell out of the window of a jet (as a passenger).

I have had the experience of standing next to a freeway sign and being amazed how big they actually are as compared to how they look when you are driving by at 70 MPH.

It does seem that they are not very realistic, but if this is a bug, I can definitely live with it. Maybe they just had to make them bigger because of how we “see” out of a window on a monitor?

They do help me see them, which I couldn’t before. I think the slider is an EXCELLENT idea and should be on the “wishlist.”

There is another long post about this. I believe the signs aren’t a “gift” but an error. They are horribly wrong.

I agree with the slider option. Default before were to small for me to read well unless I was zooming in and taxiing on the slower side. Still think a toggle for the taxi route is better option though.

Edit: Somewhere in the middle of what they were and what they are now would suffice!

I suspect the largest size signs where used when airports where created and now devs and 3rd parties need to drop the taxi signs down one size.

I’m flying only stock airports. And the OP one shows one of those billboards. I mean big signs.

I’m not sure how they do what they do but they should not be scaling them for “users”. With all the potential variations, it’s a fool’s game. Size them appropriately and let the users sort it out. That’s why we have the ability to change our resolution and zoom factors. Here are a few shots comparing nearly the same location at KSFO using a real-world image, then images in X-Plane, P3D, and MSFS. As mentioned earlier, we should be aiming for 1. accuracy - All are inaccurate to the real signage …

Here you can have an idea of the size. I would say real signs are 2 times the size of the original KSFO signs. But now are like 10 times bigger.

So here are the specs of the FAA concerning Taxiway signs:

I made a rough calculation by using the known height of the DA62 (see here):

→ The values pretty much fit to the “Size 4” values of the FAA.

Note: Pixel values will not match to this file because it is a zoomed in version of the screenshot.

For reference: Screenshot was taken at Land’s End airport EGHC with this sign: 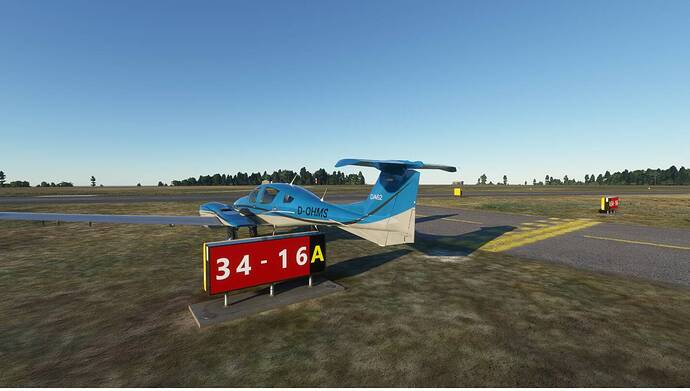 Edit: I just looked for Photos of the real EGHC on Google and found this: 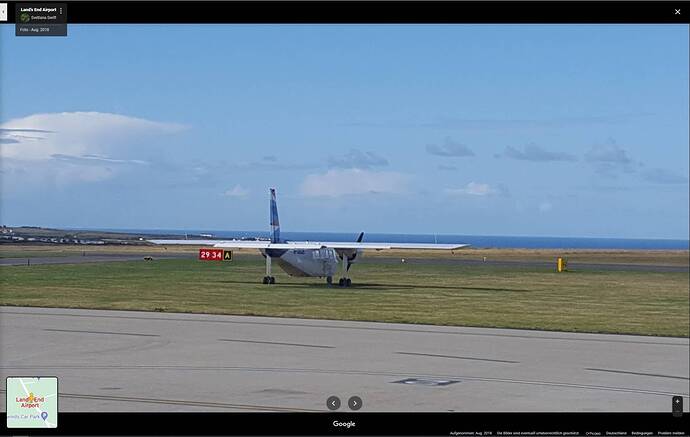 We can hardly fly from reporting bugs after just another update… I upvoted.

another non issue ppl have problems with.

This is an issue. Just because you don’t think so doesn’t mean you are right. This is flight simulator. Not RC simulator.

They should make an accessibility setting or a slider or something, not everyone that owns the sim has 20/20 vision, it’s very short sighted to just say screw them make it realistic. Not everyone can pass the vision tests the FAA presents.

I preferred when they were smaller too, but I can understand why it’s like this.

I understand that signs might be sightly oversized. But the last screenshot size is too much. I never seen a sign bigger than the aircraft.

Signs aren’t supposed to be seen too far. The issue here is not alI signs have the same size. In the same airport you find some with a nice size and just next to it, others with a billboard size. So I suppose this is a bug.

The problem is that in smaller airfields they are comically oversized. Like, it’s quite noticably out of place to someone who has flown out of airfields irl. Besides, in GA aircraft in an airport with small taxiways you’re close enough to see even the small signs. In big airports I don’t care to much if they’re bigger as the taxiways are quite wide.