The reason i started this upgrade journey was to get rid of the stutters and jutters i had been seeing in the sim. To my surprise the processor upgrade did the job perfectly. I now run on high settings, some ultra, without a single hiccup. I fly the PMDG 737, the Aerosoft CRJ and the ERJ 175 (it’s not that bad) typically along the west coast, my scenery includes the full AIG traffic package, like 20GB I think of AI aircraft, addon airports include, CYVR, KPDX, KSJC, KSAN, KBOI to make it easier all the west coast scenery from ORBIX including the GA airports. I went from about 15 fps average to 32 fps average with just the CPU upgrade. I’m not expecting quite as large of an improvement from the 3090 ti as I got from the 12900k but I feel like this will be a good experiment. Most of the videos online and comments about this topic I have seen revolve around two separate machines. One with old CPU and GPU and one with the new combo, never a mix and match or stepped up approach. I believe this makes it hard to know if you should upgrade the GPU or CPU or both. I hope that by showing my experience I can give a better picture as to what it is that affects performance and by how much.

I will post an update once the new GPU arrives with screenshots from the upgrade. I forgot to take screenshots with the 7700k to 12900k so you will have to take my word on that one. But I will post 12900k with 1080ti to 12900k with 3090ti screenshots. If anybody else has some combo upgrade information post it here so anybody looking for solid answers can find it. 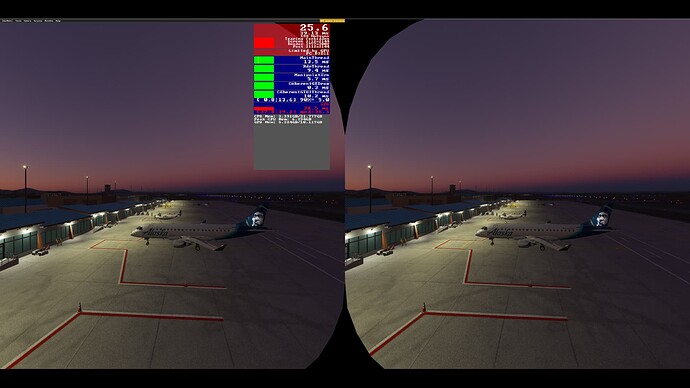 image1829×360 60.5 KB
it seems like there is still a bottle neck here. And the average is really 26 but it drops by 1 frame when i take a screenshot for some reason.

image1920×804 144 KB
Holy!! WTH! With the 3090TI in the machine pancake 4k AIG traffic, this is insane!! And it even looks more detailed despite not changing anything from the last update! Absolutely worth the cost!

image1920×804 71 KB
not as impressed with the VR framerate, still 150 resolution scaling and it feels smooth. This drop from 4k at 80+ fps with ultra to 35 in VR limited by main thread seems strange. I have a feeling it’s related to thread optimization with multicore processors. I bet if I check the CPU I will see 30% utilization with only a few cores running at 100% and the rest near idle. I wonder if I look at what CPU cores are not being used and set the affinity for processes like Oculus to those cores I could see a jump in performance. I will also remove msfs from core 0, to eliminate possible OS and other software conflicts since they seem to like running on core 0.

So this is my conclusion. Upgrading the CPU is essential if you want to take advantage of everything your GPU has to offer. Obviously these framerates 80+ FPS where on the 1080ti it was 35fps is an enormous jump, but I do not believe this would be possible without the processor driving it. I have seen other setups getting 65 -70 fps running the 9900k or 10900k so clearly the 12900k really has some massive power behind it. Was it worth it? Absolutely! If it’s in your budget, do it, or wait for the 13900k and 4090ti which might hit 100fps.

Yes, been thinking a new PC is the ticket to this game and performance. Want the 49" Samsung Geo 9 monitor, so costs lots. Next year for me, need new furnace and heat pump first. But I hate to even think what it’s going to cost, they may price me right out of the market, as eating, fuel, roof and warm are way more important to me. This is really just a game.

That monitor sounds epic. I have limited desk space so 49" might be too much and the Gigabyte g34 I just got was a screaming deal at only 350. Since I mostly fly in VR it wasn’t necessary to get a massive monitor to fully immerse in the experience. If you upgrade to the 12900k and 3090ti or wait for the 4090 I’m sure you won’t need that heatpump, lol.

So a little over 3200 for the whole build, but I spaced it out so I could pay off the CPU upgrade first.

Yeah, will put on CC but will pay them off when bill arrives, hate owing interest. Sounds about right on prices. Just cannot spend money now, so next year unless this one ■■■■ out. Have extended warranty on it, but they are not usually worth paper printed on. Hope it all works out. Yes, I have the desk space for monitor, but suspect that one will be overcome by events in next year’s CES, usually in Vegas. Then the price will drop, reviews have been all over the place. No one has specifically reviewed it for MSFS or XP, and that is where my interest lies.

Very similar rig. Pretty sure you can expect 50fps averages with outstanding visual performance with everything cranked to Ultra.

Depends on how much t-lod and how high resolution is set. Those other graphics options does not affect performance that much.

T-lod set at 200. everything at ultra. All traffic options off. lock my FPS at 45 to make me have 45fps steady both on ground and in the air.

I mostly just putt around in the Kingair. I do have the PMDG 737 but have not used it yet. I am sure when I do I will have to turn some settings down to get it running smooth. But for now it is all Ultra settings.

The upgrade to the 12900k will be a more significant than a 3090Ti for MSFS. Performance is usually limited by the mainthread. Some users have such a bottleneck, they see no performance difference between 1080p and 4k resolution.

I’m puzzled why you went with a 3090Ti when the new 4090s are rumored to be released by the end of the year. I personally would have waited a few more month to buy a 4090, as the recent leaks seem to suggest some significant gains (nearly 2x the performance) against the 3090.

For me the reason I got the 3080Ti now is because of power.

The recent leaks also suggest gains in the power consumption as well. I just don’t want a 450+ watt video card. With the 3080Ti my computer already sounds like a plane taking off. As long as mainthread is the limit, I don’t need more.

The recent leaks also suggest gains in the power consumption as well. I just don’t want a 450+ watt video card.

I can’t see the benfit of using 4090 over 3090 in MSFS though. That will not make us able to increase t-lod. Maybe increase resolution only. But what res can be used with 3090?

True, not much use in it’s current DX11 form. That might change with further work on DX12, but who knows.

The 3090 can easily handle 4K, and even 8K comfortably with some titles. Any resolution above 4K is pretty niche and expensive - I definitely wouldn’t drop $4,000 hard earned cash on an 8K monitor on 2022.

This is the reason I got the 3090ti right now. The price has come down like 1200 from a few months ago and I don’t want a 4090 that will heat my house in the winter, the 3090ti is already really hungry. I went with the 3090ti over the 3080ti because I would like to get a higher resolution VR headset in the future like the Pi-Max or maybe the Varjo Aero. But I will wait to see what oculus comes up with in it’s next release before i do that.

I might have missed it, but are you using SU9?

I don’t think we can reliably judge performance of our hardware until this platform is stable, maybe SU10 with its optimisations is a good place to start.

I too have a 3090 and 5950X, different SU’s give me different performance. SU9 I got FPS drop before the CTDs started, after about 2 hours at FL330, then I descend from FL330 to FL110 and it went to smooth as butter even though I was closer to the City.

Prior SUs it was smooth everywhere on max everything, I don’t trust the sim yet to judge how my hardware is running (personally) because there are too many issues.

I know you are on VR but it´s better to get a G-sync monitor. That´s the best solution to remove stuttering in any game. Once they fix SU10 and the current microfreezes are gone you will have a smooth gameplay most of the time, independently of the fps values you have or if they are changing.

I recently moved to 12th CPU as well and I´m really happy. I have a 3080Ti instead. You will enjoy game for sure.

I recently got a gigabyte z590 ac ud mobo, with 32 ram and corsair watercooler and intel 11700k

I use this with my old nvidia 780 gtx and an old 630watts coolermaster psu, windows 10 pro

I do have gpu sometimes above 32ms in dev fps counter but it still flies smooth
In san fransisco area.
TLod sometimes 300 to 400 Olod 100 to 200
Clouds high
Trees low
Water low
Reflections ultra

Great post, thanks, has confirmed my plans to upgrade to the 13700K (from an 8700k) when it comes available. My main issue are also stuttering/dropped frames in VR. I already had suspicions it was CPU related.

Just upgraded from my Aero 15 x9 2070mq laptop to a small form factor PC, 5600x CPU and a 3080 squeezed in.
My serviced apartment has an awesome huge 4k TV so I’m sitting in front of that and getting some great results on ULTRA/HIGH.

This title really likes power, especially on the GPU side. I’ve incrementally increased my settings until I’m just limited by MainThread in busy areas. 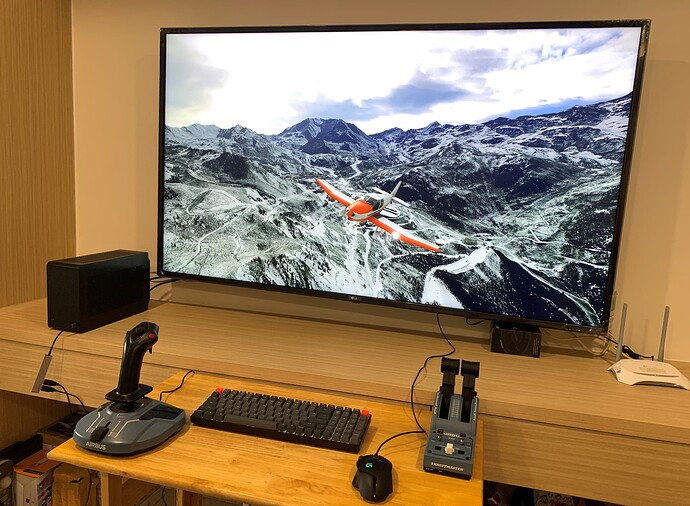