I’ve not changed my settings, which have provided smooth performance but recently, I noticed heavy stutters roughly 3.5 miles out from an airport, which returns to smooth flight about 2.5 miles out from the airport.

See the screenshots below and note the distance from the airport, along with the work being done by the CPU and GPU. 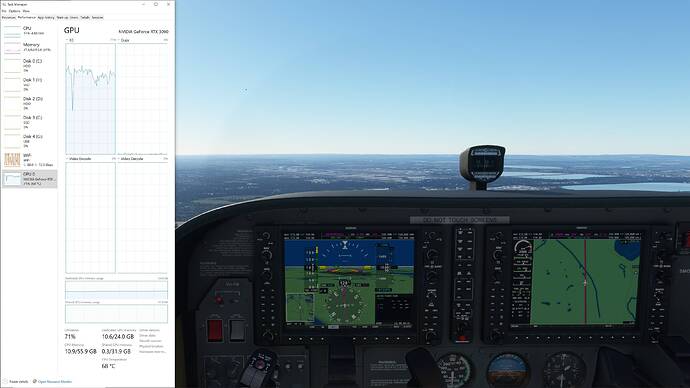 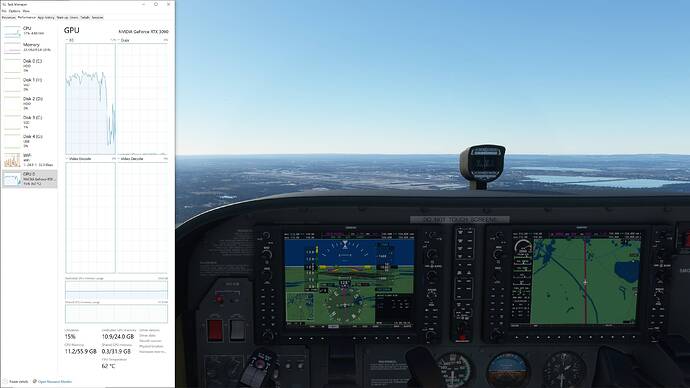 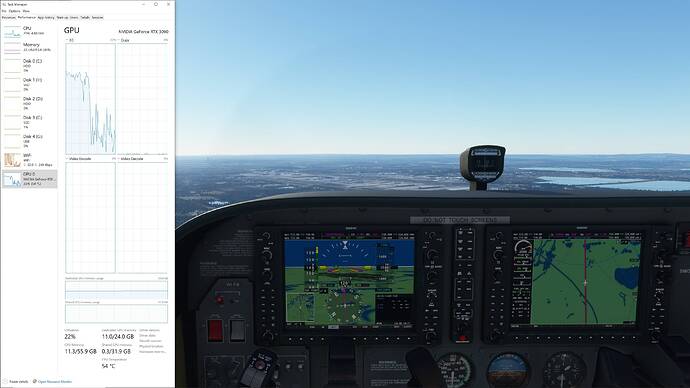 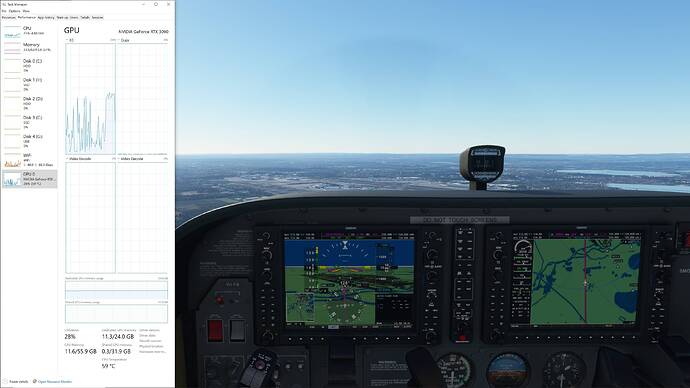 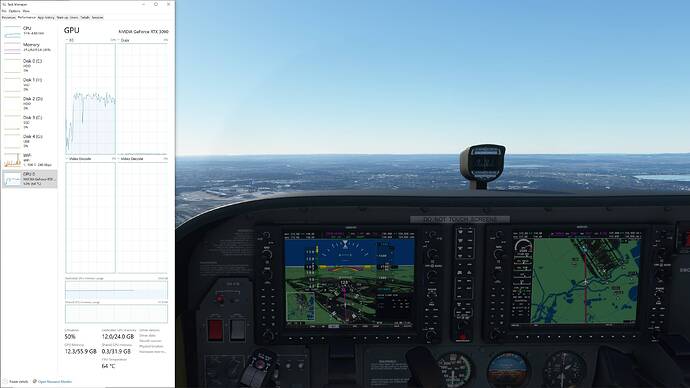 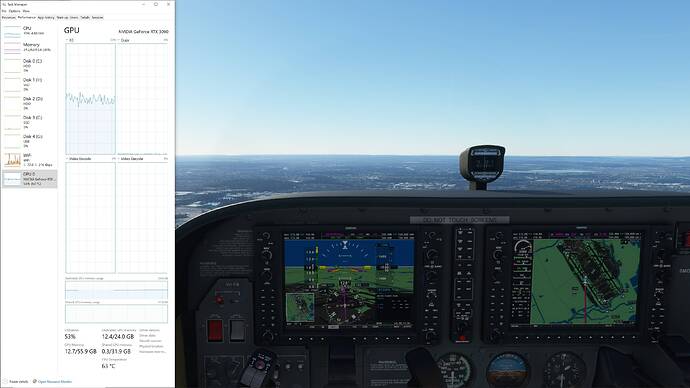 Anyone have any clues as to what’s happening? Are others experiencing this. It only started since last Friday. I have updated to the latest NVidia driver.

Try reducing the ai ground plane traffic to zero. Stutters should be almost gone. Not sure if it’s cpu, ram, or hdd/SSD related in terms of loading in AI planes.

My traffic is all set to 100% but has been for quite a while. This has only been happening for a few days. I’m wondering if the NVidia driver is a factor.

I experience the same. Sometimes it just freezes for 1 minute, then comes back with stutters until it recovers to normal.
Didn’t change anything as well in the settings. The only things that changed have been the Windows updates and NVidia graphics driver.

Recently occured at EGKK (with the free mod) at nights. But did also happen one time before at another place that I don’t remember.

I couldn’t agree more. I even created a topic related to this problem and it seems some people have also been experiencing the same problem. You can vote below if you want.

Hello everyone, I am quite happy with the performance recently with my RTX 2060, i7 10700K and 32 GB RAM. Only thing I notice is the FPS drops just before the landing. Furthermore, when I am approaching to the runway, for a second the game completely freezes and I see the ground aircrafts are appeared. Other than that, I am completely fine with the performance based on my settings. Does anyone else have this kind of issue and have a proper solution ? Thanks a lot everyone! Note: This FPS pro…

To me, if I set the slider for the ground aircraft to 0, the approach performance is same as always.

trafiic will cause stutter, any traffic. when i put all off, its smooth.

Wouldn’t it be consistently effected all the way to the airport if ground traffic was the problem. It only impacts me for about a mile 3.5 to 2.5 on approach then performance is good down to the runway and while taxing around. Confused …

These questions i ask because maybe there is a relation between transitions 3.5 miles of the airport sounds to me youre crossing between the airport scenery borders and the Bing scenery and i can imagine that the cpu and or graphics cards have to work with different calculations. Also there are different configuration files in the airplane folders with certain stages of flight, on how the specific planes behave.
Also i think there are vertical layers in the sim which i think are related to lod settings or defining in optimization of performance.
But i guess this might be off topic.

i say thats very logical, all stuff bodn to that airpot will have to load, meaning airport traffic,
standing aircraft, but why not try it out?
i do get freezes when nearing big cities and or airporst stil. its loading stuff.
it cna be minimised by putting things off, your choice.

I’ve noticed it in a number of GA aircraft. This test was done in the C172 at 1,500’ from an airport about 15nm away. The target airport was Heathrow, which is busy. It mainly occurs around busy airports but I experienced it at an airport that had no other traffic recently.

It’s because once the ground aircraft is rendered and loaded you won’t have any stutters anymore, it just needs to happen once, then it will go back to stutter free (depending on your system) again, that’s also the situation for me. Sometimes this rendering may take up to 3 seconds freezes during the approach. At least these are some of my analyzes so far.

I am not saying the issue that I describe is the exactly the same situation for you, it just sounds very similar to what I experience

Edit: And I am still quite unsure the reasons that are lying behind this. It clearly does not depend on the system as yours much better than what I have which is RTX 2060, i7-10700K, 32 GB RAM installed on 512GB SSD.

we can hope in the dx12 update these things are better spread out, but always stuff has to be loaded somehow, not much can be done if there is a slow server download …

I’ll simply try an approach without the traffic and also with say 50%, which is what I used to use many months ago. I’ll report back.

Turn multiplayer off and the stuttering is completely gone.

Another question will be are u using the settings of AI generatie traffic or live traffic this sections you can find in ui settings data and the density settings.

In our group flights I use All Traffic setting for the flight.

well its the traffic ofr sure and maybe multiplayer too.

It’s been set like that for a few months now. I only started getting the stutters last Friday.

If I set Group Only, will that remove all traffic, as a test?

Anyone have any clues as to what’s happening? Are others experiencing this. It only started since last Friday. I have updated to the latest NVidia driver.

Have you checked the nvidia control panel 3d settings if there was a change after the update, egt like, did you do a complete CLEAN install
Because its reset to default and if you work with profile settings it follow de default page