Guys, there are another couple of topics about performance drop due to GPU usage dropping to 10-15%
I do have the same issue totally random. GPU goes from 60% to 10% usage whitout any apparent reason. Sometimes it recovers after a few minutes sometime does not. Fact is that the SIM is pretty much unusable during the drops (I think it gets to single digits FPS)

I can confirm that, its totally random.
Even in the map menu before planing a flight.

This appears to me to be the same issue as the link below:

Hello. The performnance on the new London photgrammetry is really catastrophical. Often drops to 10-15 FPS on my i7 9700k and RTX 3070. In compare New York and Tokyo are butter smooth on ultra for me (35 to 55 FPS) So it must be the new scenery. Also very distracting awful screen tearing is present with the new London photogrammetry. Something very wrong here. Pls fix it. Also in compare no problems in other big photogrammetry cities…

They should be linked together and the Votes combined.

Worked for me! Thank you.

I have literally never used all PC resources running MSFS, and still have garbage FPS. Asobo have made a product with great potential and looks beautiful, but I’m starting to lose patience with the instability and the fact there always seems to be drawbacks with any update.
Please fix performance as first priority. Stability is essential :’(

Same here. Suddenly dropping from 40fps to 13fps with no apparent reason.

I have always been GPU limited, but when it drops to 13fps I am limited by main thread.

This sounds more like the following issue if your sim recovers from this state after a minute or so:

I’m seeing random performance spikes, where FPS will drop from 50 to around 10. Manipulators and MainThread will show 80+ms. This will continue for around 10-30 seconds, then FPS suddenly improves. This isn’t always back to full speed, there seems to be an intermediate state (for me it was 25-30 FPS). It will sometimes jump between the 3 states a few times (10-30 seconds each) until finally getting back to normal speed. The switch between these states is sudden and obvious, both in the…

Because I set up a Raid-0 side array @PacificSet90456 thinks I have a server.

Previous thread closed automatically, need to reopen since I am still experiencing this issue on 1.13.16.0.

Once performance reaches 10-15 fps I restart flight and FPS go back to normal.

You’re absolutely right, found that after I made the post here.

My first post on this site.
Since the latest update, my flying experience with MSFS 2020 has been unpleasant, so much so that I’ve stopped using it.
Prior to WU 3, I was getting 25-30 fps flying over NYC in the Cessna172, above 1000 feet.
I was also able to fly in between the buildings with a 15-17 fps rate.
Now I know those with high end computers will scoff at my fps rates, but considering my Dell desktop is 16 years old, I was pleased with its performance. The video appeared smooth with NO stutters. Now its a different story. I’m lucky to get 10-15 fps at 1000 feet or above and I’m lucky if I get 7-10 fps between buildings. In both cases there is much stuttering.
I studied up on what would work best for my pc. I always kept my settings at low to medium except for the clouds which I kept at ultra.
No v-sync either. I also flew offline. All was well until…
I’ve looked into ALL the solutions posted and nothing really works
My PC specs:
Intel core 3770 cpu@ 3400 hz. 16.0 gb. ram, AMD Radeon HD 7800 series. Using latest Windows 10…
Until a real solution comes out, I’m just going to shelve my $95.00 dollar investment.
Very disappointed.

Even with me. VSYNC on. otherwise cracks when turning left and right in the cockpit. Before that, VSYNC was off

Slightly confusing post (16 years old system? a CPU and a graphics card launched in 2012?) seems you have a system that is 8+ years old tech and you expected it to run probably the most demanding game currently in the market? Hope you understand people have spent $2000 on an RTX3090 card that scores 25500 in passmark and still not getting the highest performance, while your graphics card scores 4000? Similarly your CPU scores 6000 while top line CPUs score 50000+?
Hate to say that the solution you’re looking for is in your nearby computer store… you are way over the useful life of your computer, especially if you are looking for gaming.

I mis-spoke on the age of my computer.
It is in actuality, a 2012 Dell XPS 8500. The Dell display screen I’m using dates from 2006 and I forgot about the differences. Had them both so long.
I think you misunderstood my post.
I’m not expecting my pc to perform wonders at its age. I made concessions to its age when setting the display settings. I’m complaining about the fact that it was performing smoothly until the latest World Update. Without looking at the fps, you’d think it was performing at a much higher fps rate than what was indicated. There were also no stutters.
In fact I’m surprised how well it performed given its age and the demands of this game.
I would never purchase a new pc just to meet the demands of a new game. IMHO that’s
just ridiculous unless you have money to burn…but to each his own.
I’m home sick today so I have some unexpected time to work on this fps/stutter issue and have made some progress in decreasing these issues.
Thanks for responding and happy flying.

Also overlooked is the cable between the monitor and the GPU. There is a difference between DisplayPort and HDMI technologies. A 10-year-old HDMI cable can degrade the graphics from the latest GPU.

Flight simulation can be come a very expensive hobby needing lots of time and $$$. But still less expensive than flying IRL.

I’ve read about the issues that a poor pc display/ monitor can have on the overall display of a game and took this info into consideration. Thanks for the reminder.

However, all was well with my MSFS 2020 experience until the last world update.
I have been able to regain some smoothness and less stuttering by making video card adjustments.
I’m not looking to get 50-60 fps, just a return to what was 25-30 above 1000 feet and 7-15 close to street level.
Thanks for responding. Happy flying.

Edit: This was resolved by turning off AI traffic AND multiplayer. I will say that live weather is stuck on inaccurate winds aloft like when the sim first launched.

I started seeing these intermittent drops in performance after WU3 as well. I’ve got a modest system (specs below) – certainly not top-of-the line – but had been getting acceptable fps (20-30 fps) in most areas outside the hand-made airports and large photogrammetry cities, with the light aircraft and with mostly “medium” graphics. (With a few on High and Clouds on Ultra)

After WU3, nearly every flight that has lasted over ~10 minutes I’ve seen drops for upwards of a minute or so. It has happened in all the airplanes I regularly fly (C152, C172, Bonanza, Baron)

Since getting the sim back in November, I have regularly monitored performance by putting Task Manager on my second screen. The image below captured one of the many performance drops I experienced in a recent Baron flight over the state of Kansas in the USA. The weather was sunny with few clouds. For those of you who know Kansas, you’ll recognize that there would be very little load on the sim

there’s just not much there.

As seen in the image, the CPU and GPU drop at the same time as a spike in HDD activity followed by lower HDD activity. Note that the GPU memory is not full and there’s modest Wi-FI activity. 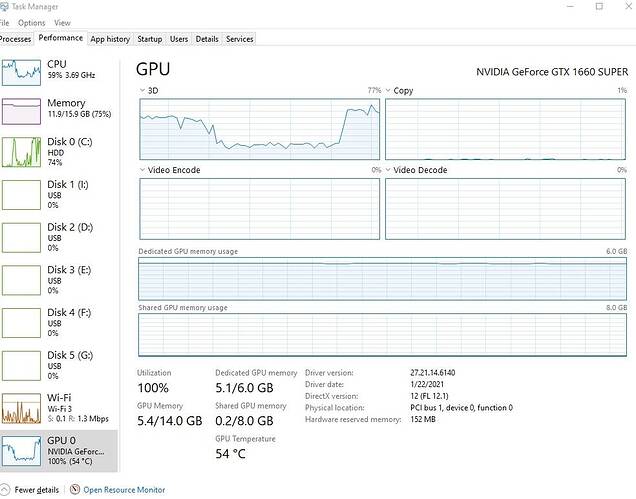 Most of the time (but not always) I see this spike in HDD activity at the same time the CPU and GPU drop rapidly. This did not happen before WU3.

Just a quick update on my pc issues of poor frame rates and stuttering which seemed to occur after WU3.
I was able to “solve” this issue by returning my video card (Radeon 7800) to its original factory settings and suspending an auto scan function on my antivirus software. While there is still some minor stuttering, my frame rates have actually increased a bit at street level in NYC (14-16 fps) and above 1000 feet (26-30 fps) again over NYC flying in a Cessna 172.
This is the best I can expect from my older Dell system and I’m satisfied. All flights appear smooth again, with only minor occasional stutters.

Since World Update 3 I noticed that 2 out of 6 of my CPU cores would run at full 100% dropping my FPS dramatically. The only thing that would bring it down back to normal is to have the task manager open. So now I always have it running when using the sim and the performance is a lot better.