Yes, i think the same MarchHare!

Very interessting:
I have on the preview (before i click on “ready to flight” 50-70 fps
after clicking the button, i have 10 fps^^ (“Limited by Main Thread”)

I noticed that in the video, it was smooth panning over the airport but as soon as you are in the plane it gets choppy. Does external view also have bad frames.

I noticed a lot of AI planes in the video. Is this a custom airport. Can you turn ALL the airport details down (workers, planes etc) and switch off any co-pilot settings.

That level of choppy performance is usually a symtom of exceeding your GPU memory or swaping out to the disk, so I would check IO in task manager as well.

Earlier today, in the bugs/issues thread where this is being voted up alongside some other problems, I said that I was starting to contemplate whether this is a Nvidia driver problem, as there was a coincidental driver update. I haven’t had time to try this yet, but funnily enough I went over to Reddit and saw someone else reporting this stuttering problem, and that they had indeed rolled back the Nvidia driver to the previous version. They have said this has fixed the issue, and someone else on Reddit has corroborated this.

Hopefully I’ll get a chance to try this today, but if you get a chance before me, Privaz, let me know what happens. Fingers crossed.

I’m hoping that it turns out Nvidia are at fault, not Asobo.

How to solve:
Go to the Nvidia Control Center and change the main setting in “Picture settings” to “let choose the Application” (the old setting was “use advanced 3d image settings”).

Switching it to the top option, will ignore any settings you have configured in Global, or Program Settings, I expect: 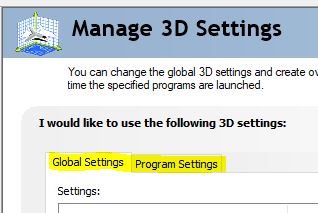 So if you were using the Nvidia panel option to limit frames to 60fps, so that the sim doesn’t eat your GPU while in the main menu, this would negate that, I think.

I am personally going to try rolling back the driver, rather than tell it to use application settings. If it is a problem with the latest driver, as advised over on Reddit, I would rather do that and keep my Nvidia control panel settings while awaiting a fixed driver from Nvidia.

If you are flying GA most of your situations are small. If you are trying to fly jets and airliners at large or busy airports the sim is currently not at a state yet for accurate representation. Waiting on 3rd party devs to help on fixing this problem with better working planes and airports. Their feedback to Asobo will be more vauled as money is involved.

Hint of the day! Very good finding. I am back to reasonable frames! Thank you!

Okay, so I have reinstalled the old Nvidia driver (August version) and I can confirm that this has brought performance back. So the fault lies with Nvidia and a bugged driver, not Asobo’s latest patch. Roll back to the old driver and you can use advanced 3D image settings again, too.

What driver version you using now

If the new driver doesn’t negatively impact performance for some users, my guess would be the driver problem only presents itself with certain Nvidia GPUs.

A new hot-fix Nvidia driver is available form Guru3D.com https://www.guru3d.com/files-details/geforce-452-22-hotfix-driver-download.html. After installing this driver I appear to have a better performance, this is probably due more to a re-fresh of the driver. Anyhow, no harm in trying the driver version 452.22 to see if it works better, (or worse) for you. Bear in mind, there are no further MSFS 2020 optimisations indicated for this driver version in the description. Charles.

It’s not a beta driver, it’s an official Nvidia ‘hot-fix’ release and can be found here. There are NO FURTHER published optimisations mentioned for MSFS 2020 for this driver.

Well, the important point being that I’ve rolled back the driver to the last previous version (whether it was .06 or .22, I wasn’t paying attention, but it began with 452) that was available to download on Nvidia’s downloads list underneath the latest September one. Reverting to the previous driver has cured the major stuttering issue. Others have confirmed this corrected the problem for them, too.

Three days ago, I had framerate drops again!
The issue was the geforce experience application…
Solution: turn off auto-optimization in the application! → Disable Game Optimizations

Hoping this helps someone