Has anyone tried one of these home cockpit systems exclusively for use with VR? This product from next level racing looks incredible. Paired with a few of the Honeycomb peripherals it seems like the more natural seating position and control placements would be a huge game changer for immersive flight.

This product also allows you to upgrade into their motion platform hardware. Pricey as hell but I imagine takes flight simming to a whole new level.

Bought an Arozzi Velocita and modified it for a VR “cockpit”. Much cheaper and compatible with a center stick that was necessary for my use. Also your knee angle is a bit more comfortable with the Arozzi and you’re not stuck with a poor quality seat - unlike with the one you linked.

The downside of that is that it really is not a out of the box solution. I was forced to show a lot of angle grinder for the stand to be properly modified for flightsim use. In the end we simmers are a really small portion of users and buyers of such things so great solutions are hard to come by.

Find a seat and some wood and make it yourself! Custom to your needs.

I’m not disputing your assertion, because I actually have no idea, but what makes you think the seat is poor quality?

It’s more of a circumstantial evidence.

-I haven’t seen a rewiev of a similar looking seat that would describe it as a “comfortable”.
-There seems to not to be any lumbar support
-Limited adjustability
-There’s a chance the cushion isn’t breathable so you’ll be drowning to your sweat at some point
-Cushion in general looks hard
-If it breaks then you most likely are s.o.l.

I wouldn’t personally buy that seat + stand because the inability to mount a center stick. Sidestick might be a possibility tho - I don’t know. If you definitely know you’ll not need a center stick maybe then, but $~800 is a steep price for a limited solution. The only redeeming thing for that seat is that you most likely don’t need to modify it with an angle grinder or a saw for Cessna-simming. For everything else - personally I’d say no thanks.

I used a cheap Ikea seat. 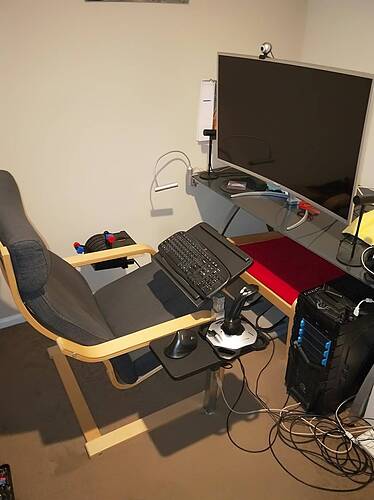 I have a NextLevelRacing cockpit as shown in the pic the OP posted. I initially bought it for IRacing and was outfitted accordingly and worked beautifully, except for the seat which was a pain in the butt (literally). Very little support and quite thin, plus the back is adjustable if you want to take out 4 bolts and readjust the angle.

When FS2020 came along, I switched over and bought the side mounting stands and plates and attached the A10 Warthog stick and throttle and some mid level rudder pedals. Eventually I got my hands on some TPR rudder pedals (which are totally awesome), but found out they are too wide to fit within the width of the tubes. That meant they had to moved farther forward to clear not only the width of the tubes but also to take into effect the movement back and forth of the pedals themselves. End result was they had to be moved so far forward that the seat could not be moved forward far enough to reach the pedals. I could only use my tippy toes to reach the pedals, and that was with leaning down in the seat to where it looked and felt like I was in a deck chair on the beach.

Well, this got old in a hurry, to say the least. I have since bought a desk, and an ergonomic office chair, transferred everything over to it, and have never been happier. YMMV but buyer beware! 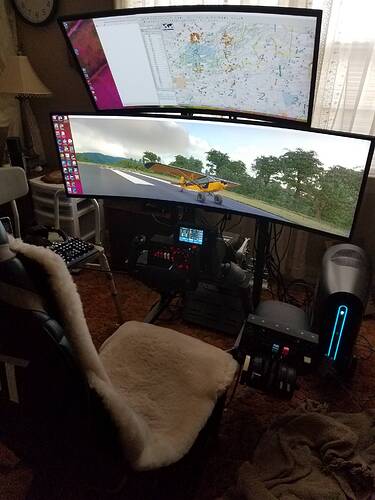 You might have to adapt the plates to accommodate the Honeycomb controllers, but for my Warthog HOTAS and crosswind pedals, it does the job just fine. Oh and you can move the throttles and joystick/yoke to any of the uprights.

Just over a year ago, i asked them if they’d be making an adapter for the honeycomb yoke and they replied to say they’d be working on it. That might not now happen, but it shouldn’t be too tough to fabricate another plate and attach it to one of the existing uprights or even just fashion a piece of wood to fit on one of the existing plates. 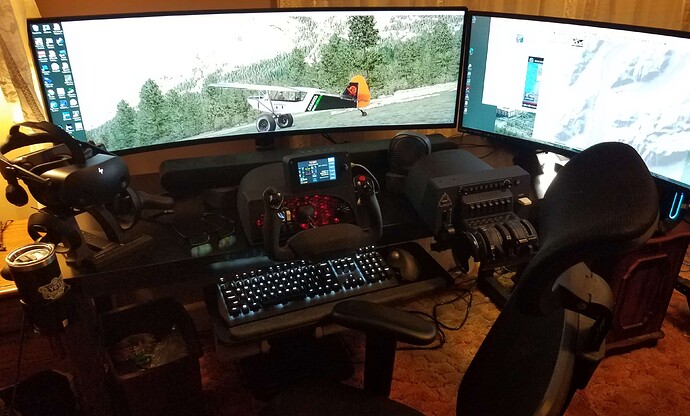 Awesome super wide monitor there - what is that? Any good?

It’s a 49" Samsung C49HG9x. It’s not a 4K (wish it were), but it’s an awesome monitor, very happy with it. Doesn’t get quite as much use now that I’m on VR, but it serves it’s purpose very well. I bought this after I bought the 34" MSI monitor, so put it to use as a 2nd monitor to display maps, Navigraph approaches, LittleNavMap, etc. and works great.

@Altsak – can you post a picture of your setup with the Velocita? That seems like a nice compact solution.

I have older model of this chair and stand set with additional flight controls brackets, it work fine for me: 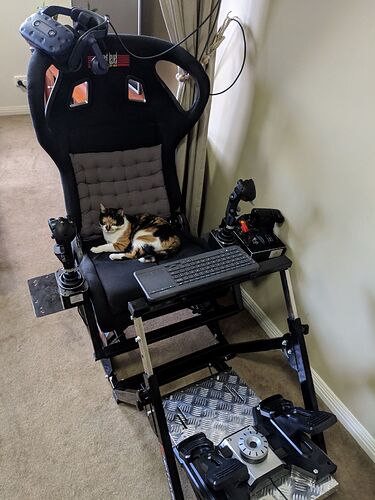 It is possible to setup stick in middle (on horizontal tube in front of seat), but placement options are limited and require diy for non-standard cases (like throttle and stick on left side on picture).

I love your co-pilot.

flying on a 6DOF from DOF-Reality.

Angle grinder used on the center stick mount for better ergonomics. Chair from Ikea. Swapped places with the throttle and the stick mount on the pedestal to make it all work. Otherwise it’s stock.

Personally I think there’s no single solution that works for all. Modifications, sometimes even with an angle grinder or a with a saw, will almost always be required to make pits “flyable”.

If I was low on floor space I probably would have gone with the desk mount route. That’s usually cheaper and usually works out of the box. I’d say going after with the heavier mounting solutions is only if you’re willing to spend time and sometimes money with the modifications.

I’m considering 6DOF from DOF-Reality too.
But because I cannot try, I’m not sure how much of a difference it makes in MSFS.

Could you please post some feedback?
How well do you feel aircraft movements?
Is it worth it?

I have a 3 DOF. I like it, it does add to the experience. Another thing to mess around with. I’m still tinkering, FS2020 prioritize yaw over roll, so I need to make some adjustments.

Is it worth it? Well, in that price range, they are pretty much alone. Don’t expect ultra definition though, motion is a bit harsh sometimes, but SRS over the past year did improve a lot… I found that there is a slight delay between my input and the translation to the rig, but it might just be me needing to tune it better.

Their client support is excellent though. I have had an issue with a motor and they sent me a replacement unit right away. Since then it works very well.

Thanks for the reply.
Is DOF able to reproduce turbulence? 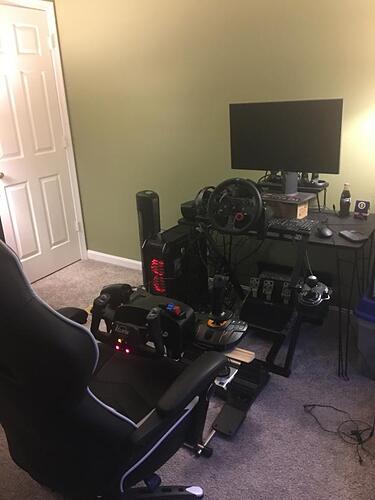 Now I own the Next Level Racing GT Lite 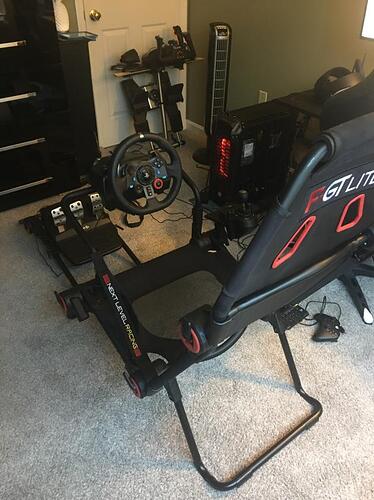 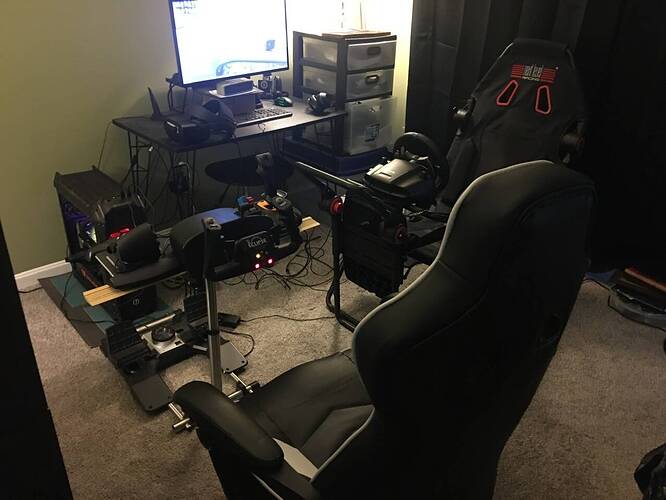