OK, just had a quick flight in the Tiger Moth over Canterbury in Godlike Mode, which is 3,820 * 3,820 with a 4090. I tried TAA with my mostly ultra settings and the same with DLSS Quality, MR off. In TAA I was getting around 32fps, but it was pretty choppy with no MR at three hundred feet. Very sharp though. I should have flown the C172 Garmin to get a better idea of the instruments, but hey, it’s late here.

With DLSS quality on tthe same settings I was getting high 50’s to 60fps. With MR on I was locked at 90 fps (45fps doubled).

To be honest there was very little difference in sharpness using TAA or DLSS Quality. The steam gauge instruments were just a tiny tad sharper in TAA, but not enough for me to put up with the choppy framerate without MR. 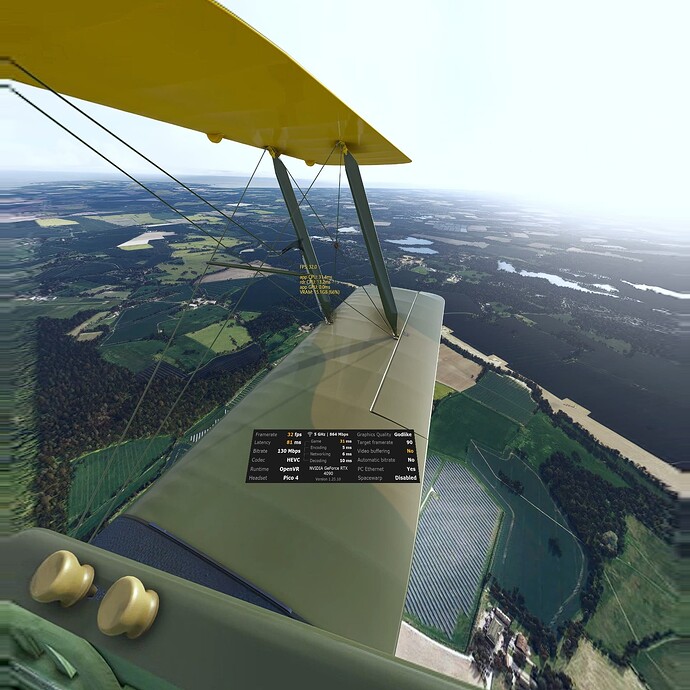 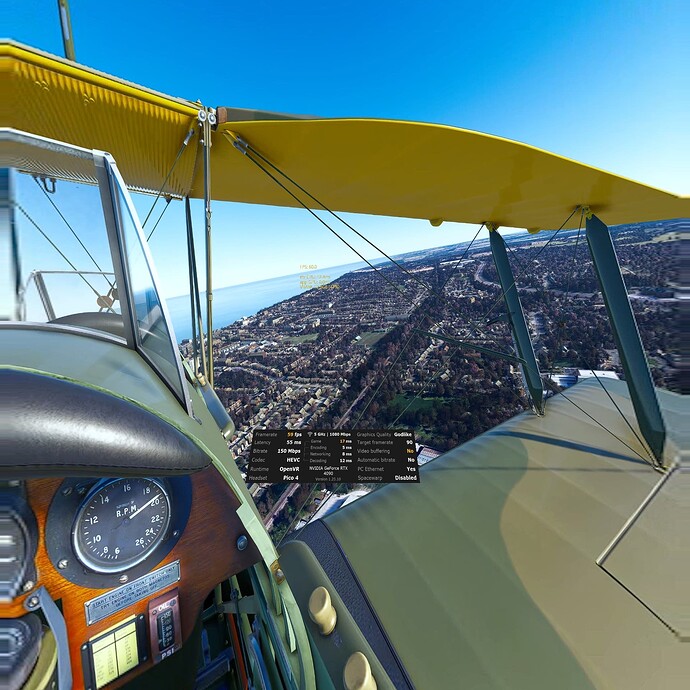 Just tried the C172 Garmin and in TAA the glass cockpits are markedly sharper than DLSS even with Quality mode. The external buttons like ALT or HDG were about the same, but fine text in the primary and secondary panels was way sharper in TAA.

Flying the PC-21 the difference is huge. TAA is way, way more sharper than FSR 2.0. But still acceptable in FSR. I also know where and what the buttons do so no big deal but I would like the same sharpness nevertheless

So for some reason I am not able to use XR Tools with the Pico 4. I see the frame rate overlay when I first go into VR (right after cntl-tab) but then it disappears as I enter the aircraft in VR. Pressing ctrl+f2 does nothing. It works fine with my HP G2. The older version of XR Tools worked with the Pico 4 fine. I’m using version 1.2.3. I do NOT have irt disabled.

Dev is very active on the Discord forum

Forgot to mention. I can ONLY use DLSS mode in VR. If I try TAA mode with same settings, FS crashes with an Application Error Box. No idea why? Maybe someone knows? Anyway, DLSS is clear sharp with smooth performance, and is stable, so far has not CTD. I tried the Quest 2, Airplay only, Oculus link cable will not work, but works with Pico4. As soon as I go into PC mode Quest2 the image is shaking all over the place with black shaking borders. Really do not know what is wrong? However, it does not matter any more as it is the last time being used for PC mode. Standalone mode it is fine, and compares very well in quality with the Pico4. I will be boxing it up and getting rid of it.

Change your keys to ctrl+space and try it

Can you please tell me your settings in OpenXR Toolkit for your color corrections and saturation adjustment? Your pictures look very nice

Anyone seeing this, if you look at the tarmac I think it’s screen door effect? 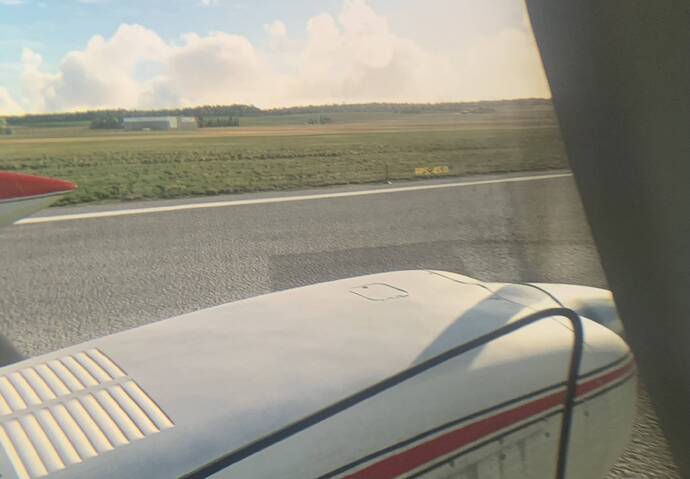 Can you please tell me your settings in OpenXR Toolkit for your color corrections and saturation adjustment? Your pictures look very nice

Thanks. These are my current settings:

Anyone seeing this, if you look at the tarmac I think it’s screen door effect?

If you mean the repeating patterns in the tarmac, that’s not screen door effect that’s a graphics artifact, similar to badly using the clone tool in photoshop. You can see something similar over water from time to time. Screen door effect is much smaller and is the dark boundary that separates the LCD panel’s pixels. Literally like looking through a fly wire screen or screen door. On the Pico it’s confined to the centre of vision, as the slight blurring of the lenses away from the centre masks it. I find the screen door effect much less noticeable on the Pico 4 than in the sweet spot of the Reverb G2.

Hi, thanks for response, so this is typical or is there a possibility I have a poor headset? I can see it most of the time

The vertical pattern I noticed on the tarmac (cropped below) is a game artifact, nothing to do with your headset, so far as I can tell. The rest of the image looks fine.

Depends on your graphics card. With a 40 series GPU you can get good performance using Virtual Desktop using a WIFI 6 router and the pancake lenses give a much wider clear image that is very compelling. With a 30 series compromises need to be made in settings, but people are still reporting good results. I have a 4090 and both the G2 and the Pico 4 and while the G2 is less of a hassle to set up and is sharper in the central sweet spot, the wider clarity of the Pico 4 sees me using it more than the G2. Certainly the price is reasonable and of course you can use the Pico 4 as a stand alone headset for other games.

I have an rtx 4080. Just to remain with same clarity and fps I dont think it is worthed to upgrade no ?

At first I preferred my G2, now I tend to enjoy the wider area of clarity in the Pico 4, but it’s not a simple yes no as an upgrade, so I can’t give you a definite answer. Check out some videos on YouTube with it on MSFS and see what you think. A pity it doesn’t have a Display Port connection though. There is a remote possibility that Pico might bring out a Display Port model in the future, which would make it a definite yes as an upgrade. Then again, HP might bring out a new G3 model with pancake lenses and an even a higher res screen, who knows?

For me the Pico 4 is still a stop-gap, as I’m saving up for a Pimax Crystal, if the reviews are good.

If fps is same and I gain some clarity and remove the fogging i dont mind than. Reviews are all good but i used to use virtual desktop / steamvr with my older quest 2 and was far away from stutter free with messing all the settings all the time. Obviously at that time had a 3060ti.

I can get a solid 45fps using motion reprojection, so it’s as good or better performance than the G2 for me. With a dedicated router I get very few stutters. Virtual Desktop seems to have had upgrades that have given much improved performance. Motion reprojection using Virtual Desktop also looks much better to me in game than Windows Mixed Reality.

I have a Reverb G2(v2) and desperately wanted the Pico 4 to be my next headset with Virtual Desktop (I have a 4090) unfortunately I couldn’t get the visuals I wanted so I’m staying with the G2 which now runs on High and some Ultra settings. Waiting on a G3 or Pico 5 with display port, I think the Crystal will be a long time coming before it’s a viable option.