My sim is back to stable, no pop up, most of my achievements intact as well as all of my flight seconds stats.

The only solution that I see possible is to release a patch that will restore the missing statistics data from what has not been deleted and remains.

For example, you can restore the clock from the data on the first screen

This screenshot shows that all completed tasks are missing,

but if we go into the task itself, then we see that it has already been passed

In this case, the patch could also take data from completed tasks (training, landing) and restore it back to the menu of the previous slide

I would think that all those missing number were collected and/or calculated from flightdata in the logbook. Since (at least in my case) the logbook is completely erased, there is no data to retrieve these numbers from.
My assumption: This is not recoverable.
I’d love to be proven wrong in this case. 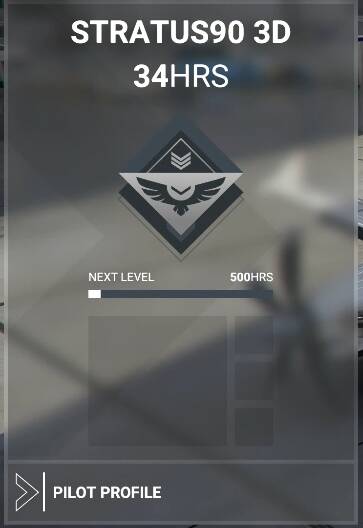 Yes i had the “package out of date” message and i clicked “Sign out”, as advised. Landed on the “Press any Key” screen. Flight Log back to zero and all options back to default. Bush Trips and Challanges also back to zero. Achievements also gone. Signing out and signing back in with the xbox app does not help. Tried this multiple times. Its annoying…

Hey all! We would like to confirm if any users lost their logbook hours on the most recent build (1.15.7.0). The devs are curious to see if

While they are investigating this, I’d just like to pass this information along:

Even if they can’t, at least, I wish they could make the PC version address this in a PC specific way. In effect, all user-facing settings regarding controllers, logbook, and a few others are all "managed’ as if the PC is an Xbox(1).

The problem is that if there is a bug in the code, or a bug in the “cloud” sync, you loose it all like the recent deleted logbook bug is telling. Instead, with user manageable and editable files (json, whatever), every single user can manage his/her own backup and restore process in case this is happening.

I doubt they will change this because the way the game is managing such user settings is also a by product of using Xbox related dev tech and tools, which is encapsulating all of this inside a tightly controlled system. This shouldn’t make impossible adding the capability from a technical standpoint though, because whatever the “managed” system in place, it is still possible for the game to implement code to load user managed settings files after or in-lieu of the initial Xbox managed settings.

As I said bevor:

Playtime gone missing [Packages out of date]
This issue happend to me first time in February.
I sent it to Zendesk:
" Your request (#101111) has been updated. To add additional comments, reply to this email or click the link below:
https://flightsimulator.zendesk.com/hc/requests/101111"

Watching with interest on this… I’ve lost 380 hours!
Is there anything I need/can do to help rectify this; or has it all gone forever?

Here’s a pic from my profile, this info can be used to extrapolate at least the missing hours (by totaling the time with autopilot and the time without) to adjust hours to the most recent total, or at least an accurate approximation. I don’t know if that will include recent trips or not. It won’t have line item detail (like what I flew from where and to where, etc.), but at least it can correct the total.

I don’t know how many hours 755,000 seconds equates to, but that’s simple math that I’m just too lazy to do at the moment.

It won’t help much with my prior losses, I suppose the only way to do what would be for MS and/or Asobo to go back through their records for my Gamertag in order to add those back in. While I have zero clue how difficult such a thing might be, it would be very nice to have my accurate total back, or at least some approximation of it. Otherwise I might never get that 1,000 hour badge, which I should already have or at least be pretty close! 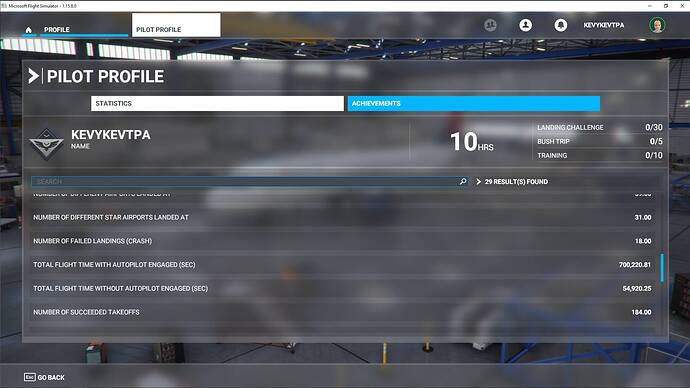 My logbook was lost during the “Packagegate” error. I have just updated to 1.15.8.0 and I still have my “11” hours gained since my logbook got zeroed

Hello there,
I started a fly from RJTT to KLAX on 2021.04.07. During the flight, a popup asked me if I want to update (YES/NO). I was thinking that maybe there were some hidden island in the middle of pacific =) I pressed NO, then landed a few hours later. On 2021.04.10, the popup showed again after a new fly. I clicked on YES (aborted the fly), let the game do his stuffs and then restarted my flight. I noticed on 2021.04.12 that my flight hours were reset to 0. It’s a little bit annoying but can live with that. 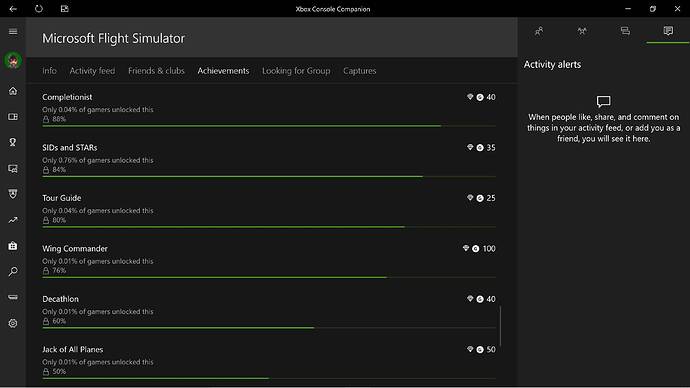 Achievements are triggered…this would not retrieve your logbook

Yeah, but that data is lost, remember?

After updating the software and installing World Update IV, the contents of the Profile tab are gone. There are no graphics in this area. Can’t access logbook, content manager or anything else that is supposed to be in there. How do I get them back?