Sorry for the ultrawide screenshots. I usually bring these down to 16:9 but there’s a lot of clouds in them and I wanted to show all of them. In here, there’s a mixture of both gray and white clouds. The gray ones are covered by clouds that are blocking the sun. But the white ones are pretty white. Wondering if there are certain weather conditions where the clouds appear gray when they shouldn’t be. 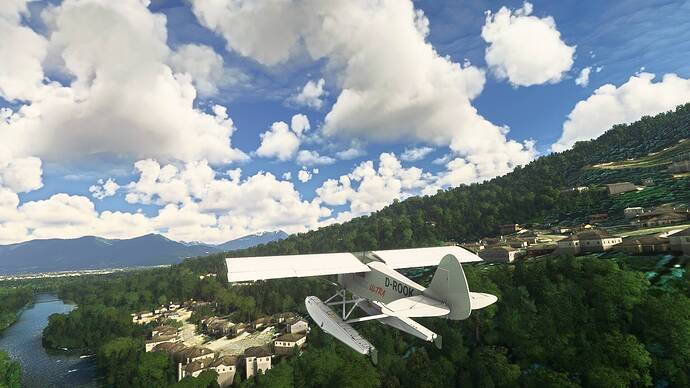 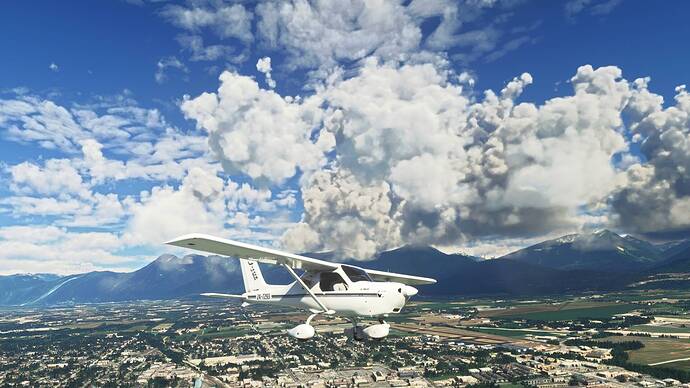 There’s restoring the quality that was lost and then there’s just this. The clouds get all grey, brown and spitball-ish at low altitudes, and one of my favorite things about SU5 was how, despite the slightly oilier look, they actually looked white most of the time.
Instead, after the hotfix, we’re back to the same way it’s always been; Nice quality and vivid white at anything above 10k, but sub-10k and it may as well be a marsh mellow fresh from the roast over a fire.

Is there no way to maintain the quality of the clouds while keeping the whiter appearance?

I prefer the post hotfix clouds. Yes they are less white, but at least the whole scene is not overexposed / washed out like it was in SU5.It was looking pretty bad on everything else (for example, you were not able to see any details on the planes due to excessive brightness).

Lol, the clouds are much better now after the hotfix. The grey parts are the shadows, if you don’t want it disable the shadows on your sim.

That big brown explosion of a cloud right in the center is most certainly not, “from shadows lmao” it’s the cloud itself. Being at low altitudes for some reason causes them to suck up all the color from the ground, like ultra absorbant sponges.

Here, another comparison for your troubles 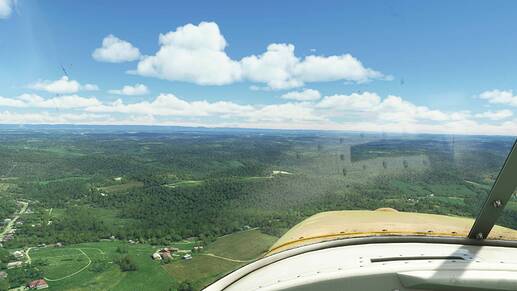 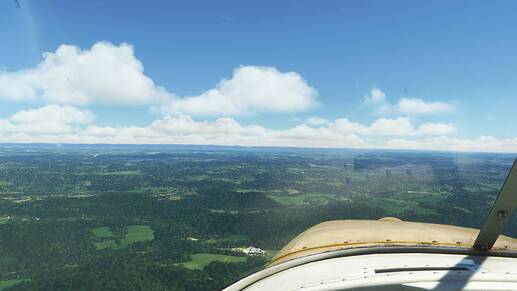 Mostly everyone including myself are happy with the Clouds after the hotfix , not the cartoony looking and over exposed and saturated clouds.

Edit: If you are on PC try reducing the quality from ultra to high , i think that will make them less spongy.

That’s all well and good, but the only way I could see the SU5 clouds as being blown out and, “oversaturated” [which by the way, shouldn’t be possible considering they don’t have color TO saturate], is if you only ever flew with sunglasses on and industrial grade blinders over the windscreen.
Both the clouds and even to some extent the sky are, if anything, DEsaturated.

It’s still a GOOD LOOKING SIM, for sure. But in terms of what I’ve been seeing out my window since starting flight training in January, SU5 came a lot closer.

Here’s the trouble; The white boost perhaps blew out some of the higher altitude clouds, I could perhaps get that.
But at really low altitudes, and facing at angles where you’re looking at them from the sun, the clouds look very grey and, kinda like fuzzy lead wool. The white boost from SU5 really helped out in those particular viewing angles.

Yes i agree with them being a bit grey , hopefully they can think of something for this too in the future.
But for now let’s just keep flying and enjoying the Sim while we can

I don’t have any issues with continuing to fly the sim, it’s by far and away my favorite. Country mile, not even an ounce of hesitation. IMO worse clouds are not going to keep me from that.

I’m just upset, because the change being completely reverted is really not what I wanted. There was something off about their quality that needed to be restored, but the actual brightness and shading of them, I felt at least, was a huge improvement in SU5. They looked brighter, whiter and far more like real clouds in almost every scenario I put them through.

Now, they have their full quality back, but they also got their awful, brown/grey paper spitball look, especially at sub 10,000ft. I really don’t see what made people think that these somehow look more real, when even the darkest clouds about aren’t shaded more BROWN than white.

I fully agree with you, I thought the clouds were nice and white pre hotfix, this in my opinion is a regression.

I think this is the result of fixing the in-cloud lighting shader and dropping the overall exposure a bit, the actual look of the clouds hasn’t really changed if you look closely.

Hopefully they bring some improvements in future.

Her, I’m really struggling for adequate comparison shots, since I didn’t think to prepare any for the hotfix. But this is the next one I’ve got that gets it across: 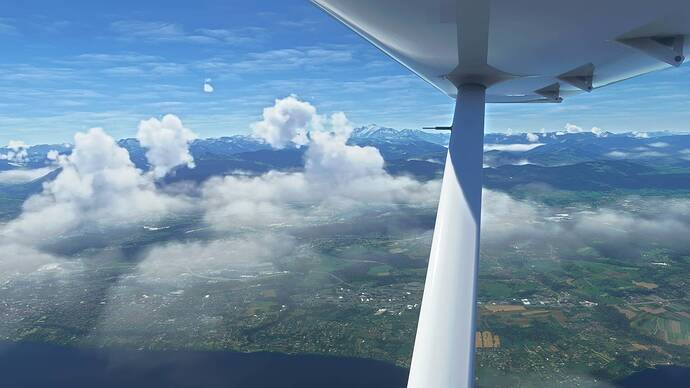 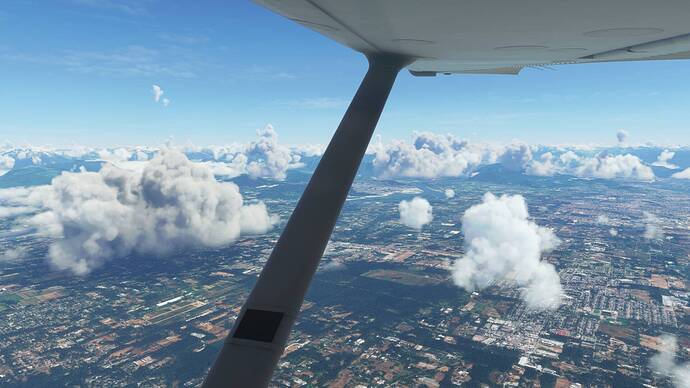 I’m sorry to perhaps come off as whiny or something, but it really does just feel different. I can’t shake the feeling that SU5 clouds looked a lot closer to what I see flying IRL.

They look so nice now!

Certainly, I am happy that you still appreciate their look, but… 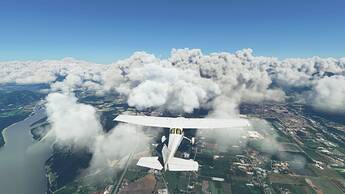 Maybe they’ll look into it again with just a slight increase in overall brightness, because i agree that really looks weird.

The comparisons are fairly close, all things considered, and the cloud FORMATIONS are not strictly the issue at all. It’s their shading and brightness.

Lest we remember how much the general forums were up in arms before this hotfix because, god forbid, clouds were WHITE.

Obviously the sim is still plenty usable, it’s the most usable it’s been in a long time barring the control issues. But this is a regression that really wasn’t necessary except for people who, I MUST assume only fly with really strong sunglasses on IRL.

I mean they hot fixed it so, yes? It was taken as a high priority item.

I wish they hadn’t but what can you do. I guess we’re stuck with occasional ash clouds for the time being.

You know what, if y’all like the other cloud style better, who am I to judge? I withdraw my objections. I’m sure they can, indeed, make further improvements.

Please don’t be confused; I’m not looking for the clouds to be slathered in conspicuous white and removed of every possible shadow and inch of depth they have. I just feel that, in SU5, the overall brightness and whiteness of the clouds was a lot closer to what I’ve seen in flight training throughout the year. Even the overcast felt, to me, more on-point.

Despite my comical jests about sunglasses and blinders, I don’t mean to punch down at anyone who DOES prefer these clouds, pre-SU5/Post-Hotfix, they’re still good!

I just wish that the white boost they’d received would have stuck around.

They could be a bit less “muddy”, I agree. With a bit more tweaking Asobo will eventually get it right for sure. 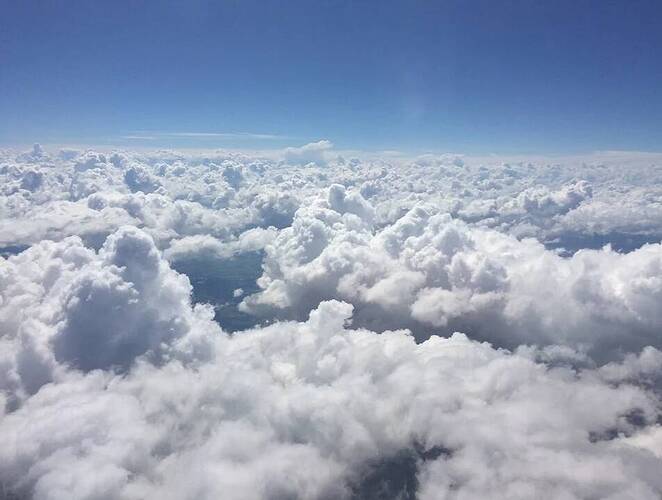